One writer, many dreams 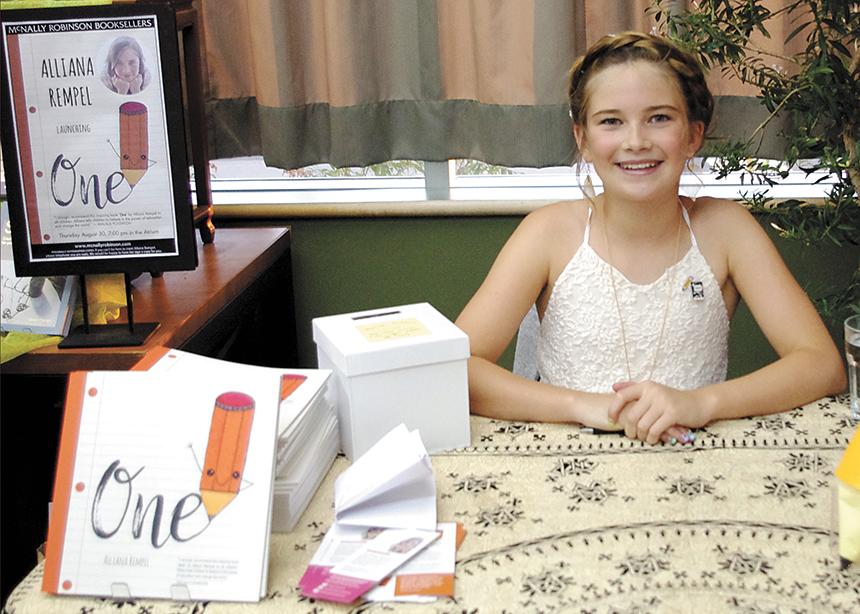 Alliana Rempel wrote and illustrated her book One when she was just 10 years old. (Photo by Nicolien Klassen-Wiebe)

Alliana Rempel has raised thousands of dollars to support inner-city shelters in Winnipeg, the Children’s Hospital and the Malala fund. Most recently, she published her first book, the proceeds of which will support education around the world.

Her book One, which she illustrated and wrote, is about a young girl in a war-torn country and her magic school supplies that come to the rescue when her school is shut down by terrorists. She was inspired to write it after she read I Am Malala when she was 8. The author, Malala Yousafzai, is a Nobel Peace Prize recipient who was shot by the Taliban in Pakistan in 2012 for her activism around girls’ education.

“What inspired me to do the book was Malala’s quote, ‘One book, one pen, one teacher and one child can change the world,’ ” Alliana says.

She discovered the book when her mom, Carissa Rempel, read it after hearing Ziauddin Yousafzai, Malala’s father, speak at the Mennonite Economic Development Association (MEDA) conference in Winnipeg in 2014. Alliana started Battle the Bad with Beauty, a project to sell her artwork online and raise money for the Malala fund.

When Carissa saw all the ambitious projects her daughter wanted to take on, she says at first that she felt compelled to protect Alliana from disappointment. As an adult, Carissa saw how much work there would be, and sometimes it was hard to prevent her realism from making Alliana doubtful. Something Yousafzai said when asked how he supported his daughter stuck with her, though. “When he was asked about Malala, he just said, ‘I just didn’t clip her wings,’ ” says Carissa. So she let go and accepted that her daughter’s projects would be important life experience regardless of the results.

Within six months of starting Battle the Bad with Beauty, Alliana had reached her goal of $2,000.

Perhaps her experience in philanthropy work helped her with this. She was just five years old when she started selling her art to fundraise for various causes. While most children her age were watching TV or shooting hoops, at age nine Alliana was joining the Canadian Refugee Association and teaching English to the young newcomers her church sponsored. The Rempels attend The ConneXion, an Evangelical Mennonite Conference church in Arborg.

She’s even spoken at a MEDA conference in San Antonio, Texas, and recently won the Young Humanitarian of the Year Award given by the Manitoba Teacher’s Society.

“Honestly, she just blows me away all the time,” says Carissa. “You have so many negative thoughts as an adult, you always think of all the obstacles, right? And she never does, she never sees those barriers.”

The ideas behind One had been percolating for a while, but when her class at Arborg Early Middle Years School started working on stories, the project came to life.

“Ali is a go-getter,” says Tanya Harding, her fifth and sixth grade teacher. “She is very sweet, very considerate of others, but a perfectionist in herself. . . .[The book] was just supposed to be a classroom project, but it wouldn’t have mattered to her, she always has to give 110 percent.”

When Harding read Alliana’s draft of One, she applauded the story and told her it should be published. To her delight, when Alliana returned to school in the fall, she excitedly told her teacher that her book was indeed going to a publisher! What Harding loves the most is seeing how inspiring Alliana and her book are to the new students entering her Grade 5 class, showing them they can actually be authors and make a real difference. “I’m very very proud of her.”

Alliana launched One at McNally Robinson Booksellers in Winnipeg on Aug. 30 to an audience of more than 60 people. The book cover includes an endorsement from Malala herself and additional praises from her father and Jahan Zeb, co-founder of Global Peace Centre Canada. “I strongly recommend this inspiring book. . . . Alliana tells children to believe in the power of education and change the world,” writes Malala.

After addressing the audience and reading her book, Alliana encouraged those gathered to find what they like to do and use it to help others. And to other young people wanting to make a difference, she has an empowering message: “I think everyone can make a difference no matter how young they are or wherever they come from, and that everyone has something unique to offer, just like the characters in One.”

One by Alliana Rempel of Arborg, Man., can be purchased online at chapters.indigo.ca. Proceeds will go towards building a school in Nicaragua with WE Villages. 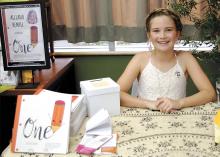 Alliana Rempel wrote and illustrated her book One when she was just 10 years old. (Photo by Nicolien Klassen-Wiebe)