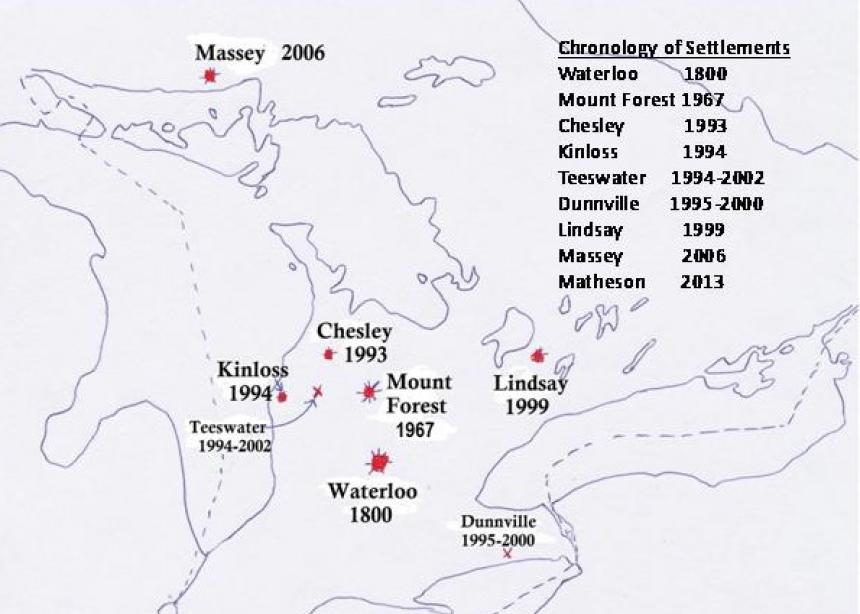 There has been remarkable growth in the number of Old Order Mennonite meetinghouses in Ontario in the last 50 years. They have been spreading farther afield, especially in the last 20 years. Amsey Martin, an Old Order deacon and schoolteacher, and Clare Frey, a minister from the Markham-Waterloo Mennonite group, talked about this growth at a meeting of the Mennonite Historical Society of Ontario, held at Floradale Mennonite Church on October 24, 2015.

Old Order Mennonites are traditionalists who resist adopting modern expressions of faith and culture. Most of them are small farmers. Generally “Old Order” means they use horse-and-buggy transportation, although this article considers the Markham-Waterloo Mennonites as a kind of Old Order group.

Martin put together a chart showing that between 1901 and 1955 there were no new meetinghouses built. Until the 1970s, they were all in the northern part of Waterloo Region or just across the boundary in Wellington County. Beginning in the 1970s, a new community began in the Mount Forest area, about 60 kms north, and the Waterloo community has been spreading north and west into Wellington and Perth Counties. Since 1998 several other new settlements at further distances have resulted in many more meetinghouses.

Frey, who enjoys collecting information about other plain Mennonite groups, reflected that this growth and spread is happening in other Old Order communities in the U.S. as well. He also explained that in the 1800s, Mennonites were spreading throughout southern Ontario, but in the end, many of the small outlying churches didn’t survive.

He described one failed settlement of the 1880s, when a group who moved to Iowa was zealous about having a plain, traditional and “pure” Mennonite Church. The Iowa settlement collapsed in less than 20 years and the people moved back to established Mennonite centres. Frey said that descendants of the Iowa migration who returned to Waterloo County were very negative about new settlements.

When the Ontario Old Order Mennonites split from the mainstream Mennonite Church in 1889, they had 15 places of meeting: four in Waterloo County; four in the Markham area; two in Vineland; two in Cayuga; two in the Zurich area; and one in New York state. In the next 50 years, most of those meeting places became extinct. The impact of all these closures was the mentality that you stay close to home, you don’t venture out to new places, said Frey.

The first half of the twentieth century was a time of contraction for the Ontario Old Order Mennonite group. Both Frey and Martin pointed to the following reasons for this lack of growth. In the 1910s a stricter group (known as the David Martins) broke away. In the 1930s a Bible Chapel began in Hawkesville, made up of former Old Order Mennonites, and through the ‘20s and ‘30s a number of families joined Mennonite Conference of Ontario churches such as St. Jacobs, Elmira and Floradale.

Martin also reflected on why the Old Order church was expanding by the 1950s and ‘60s with fewer families choosing to leave the church. Martin believes that the leaders in the latter part of the twentieth century were better able to articulate a sense of what it means to be Mennonite/Anabaptist and the rationale for being plain and separate from the world. Perhaps earlier leaders were reacting to the 1889 split and were careful not to sound like the “other” Mennonites. By the 1960s, leaders were clearly teaching New Testament principles, explaining salvation and encouraging scripture reading.

In 1964, Pathway Publishers began printing magazines from an Old Order perspective, and Martin believes this had a large impact on the broader Old Order community. Many Old Order families received the Family Life, the Young Companion and the Blackboard Bulletin on a monthly basis and were influenced by the articles explaining the need for separation from the world and the stories showing people living simply and biblically.

Martin also pointed to Mennonite historian Sam Steiner’s observation that the Old Order church grew after they began organizing their own parochial schools. Martin said he didn’t believe it at first, but on reflection it began to make sense.

“As an educator myself, I find that fascinating, but I shake in my shoes at the huge responsibility of us parents and teachers,” he remarked. He followed that with a prayerful quote from the hymn, “O God, our help in ages past, our hope for years to come.”

Both the Markham-Waterloo and Old Order Mennonites began building new meetinghouses in the 1950s and have spread mostly north and west from their original home in Woolwich Township, Waterloo Region. The town of Elmira is still in the heart of the settlement, but today many of these traditionalist Mennonites do their shopping in towns like Listowel, Harriston or Mount Forest.

The Markham-Waterloo Mennonites have begun two outlying settlements, one in Beachburg in the Ottawa valley, begun in 1980. The congregation of North Haven was organized in 2009 in a new settlement near New Liskeard in northern Ontario. A church building was erected in 2010.

At an even greater distance are communities in Massey, west of Sudbury, and Matheson, east of Timmins. Today Massey has two meetinghouses: White Pine (2009); and Lee Valley (2010). A meetinghouse was built in Matheson in 2014.

Both Frey and Martin indicated that new settlements are started by lay people, not church leaders. When enough families have settled in an area to organize a congregation, then the church leaders get involved. Two Old Order settlements that never got off the ground were Teeswater (1994-2000) and Dunnville (1995-2000). In these cases, not enough families moved to the new settlement to begin a congregation and eventually it folded.

Related stories:
10 things to know about Mennonites in Canada
Books show Old Order Mennonite culture from the inside
Poetry, paintings bring Old Orders to life
Pennsylvania Dutch a language with merit
History surprises
Meet me at the Grand! 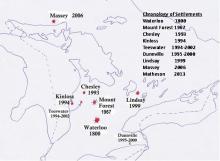 Maybe you counted the Gorrie area settlement in the Kinloss or Teeswater settlement, but they would consider it a separate entity. If you look at the maps available at the Wallenstein general store, they have one for Kinloss and a separate one for Gorrie that has close to 100 families listed. They often shop in Wingham that has long had hitching rails but now also has a covered shed their the horses while shopping is done. And perhaps there are too few to count, but there is a new settlement of "Orthodox Mennonites" near Douglas (north of Renfrew). Five families moved in 2014 from the Gorrie area and several more have plans to do so. The man who started Gorrie Line Produce has now helped his family start a similar business on Hwy 60 north of Douglas and another family also has a produce stand and they are building trusses. Their oldest son is the school teacher for their school. It's amazing to see what they've done with farms that have not been worked in the previous 50 years. The community readily installed hitching posts to accommodate their new residents.

I hope to cover some of this history in Youth Sunday School. I'm wondering if there are similar or different growth patterns of settlements by other anabaptist groups such as the Amish, the David Martins, Old Colony, for example.

At our Mennonite Historical Society of Ontario event on Oct. 24, we had speakers from the main Old Order group (Amsey Martin) and the Markham-Waterloo Mennonite Conference (Clare Frey) so I limited this article to what is happening those particular groups. Yes, the other groups (Amish, David Martins) are also growing and moving to new settlements. Linda Garland commented on the "Gorrie" group, a horse-and-buggy group also known as Orthodox Mennonites. According to Clare Frey, they began a new settlement near Douglas, Ont., within the last couple years and also have a settlement near Sault Ste. Marie. The Old Colony Mennonites are also increasing their number of churches in Ontario, but I don't believe they are as apt to move into specific settlements the way the other groups do.

You are right, Brenda. We have made the correction. Thank you.