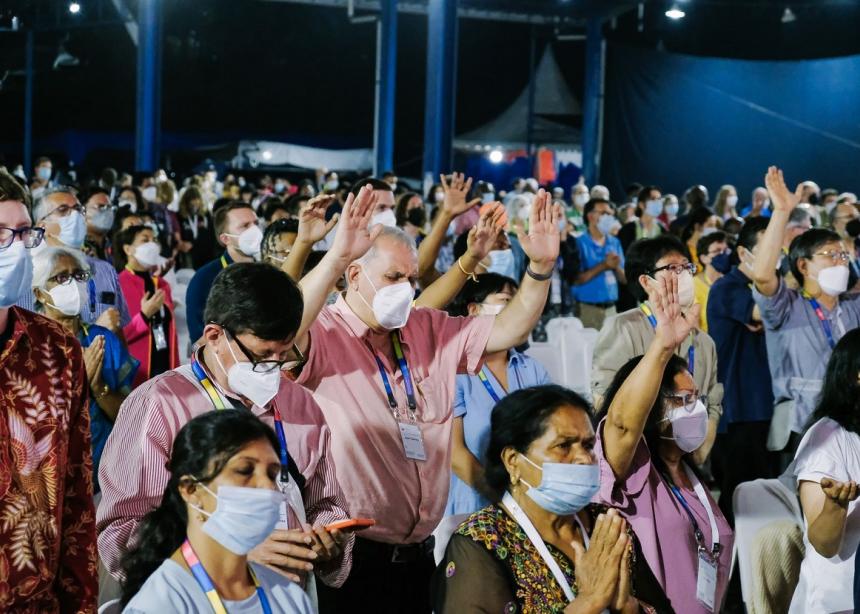 In early July, I was in Indonesia—virtually. Like approximately 800 other Anabaptists around the world, I registered as an online participant of Indonesia 2022, the 17th assembly of Mennonite World Conference (MWC).

You’ll find coverage of that significant event on pages 4 to 7 and 13 to 23 of this issue, including reporting on the Global Youth Summit, which was also held in Indonesia.

Traditionally these events happen every six years and gather Mennonite-Anabaptists from around the world for times of worship, learning, inspiration and friendship-building. This assembly was originally scheduled for 2021, but the COVID-19 pandemic delayed it by one year and forced organizers to create options for digital attendance, for those who would join from afar.

This was my fourth MWC assembly but the first one accessed via the computer screen. Every day I logged into the “hub,” where a variety of options presented themselves including pre-recorded videos and links to upcoming events.

The theme of the assembly, “Following Jesus together across barriers,” seemed especially relevant. There were the usual challenges for international events, such as language and cultural differences. For those “on the ground,” there were mandatory masks and other pandemic restrictions. As a virtual attendee, I dealt with the 11-hour time difference. I did “attend” some live events, but it was hard to give full attention to sessions that happened during the late hours of Ontario evenings.

Seven years ago, as we were gathering in Pennsylvania for Assembly 16, few of us could have imagined that technology could carry off a hybrid event of this scope. Sitting in front of my laptop in 2022, I found that many times the technology worked; sometimes it didn’t. I cheer the planners and technical team for their complex work in coordinating people, visuals, sound and interpretation, both for the in-person attendees and for those of us taking part from a distance. Thank you!

Following are some initial observations from this virtual participant.

We love to sing together. The portions of each major session that were devoted to music showed a dedication to worshipping God through each other’s music. The songbook (which I received as a PDF document) includes 39 songs from the various continents, with lyrics in original languages and in translation. The international music ensemble led the assembly with passion and respect for the diversity of languages and musical styles. One word to unite us: Halleluia, Hallelujah, Haleluja, Alléluia!

We seek to live out the gospel of peace. Song no. 36 echoes the words of Menno Simons: “True Evangelical Faith.” Written by Larry Nickel of the United States, the song paraphrases a famous quotation of our denomination’s ancestor, spelling out the practical ways our faith “cannot lie sleeping” but must give assistance to those in need and “overcome evil with good / return someone’s hatred with love.”

The theme of active peacebuilding emerged frequently in the keynote addresses by speakers from several dozen countries. They told of challenges in living out Jesus’ message in their own contexts, along with their commitment to help make peace happen. Peace was a dominant theme also in the workshops offered, both in person and online, along with stories about social justice and the ministry of caring for others. There were testimonies of interfaith and intercultural dialogue, with a goal to learn from and respect those who are different from us.

As a participant from afar, I missed out on the hospitality of the Indonesian hosts, the beautiful scenery and delectable-looking food (thanks, Facebook friends!), and the making of new friends. But I am glad I “went” to Indonesia 2022.

Canadian Mennonite continues with the summer practice of offering monthly digital-only issues of the magazine. In early August, subscribers can watch for the August 8 issue to arrive in their email inboxes. There will be no corresponding print version, but we will be working behind the scenes preparing reports on the Mennonite Church Canada Gathering scheduled for July 30 to August 1. Watch for reports on that event in the next print issue, dated August 22. Your subscription includes both print and digital delivery for the same cost. If you don’t want to miss the digital-only content, you can update your delivery preferences at canadianmennonite.org/subscribe/digital, or send your request to office@canadianmennonite.org.