'If you’re not hungry, your neighbour shouldn’t be hungry' 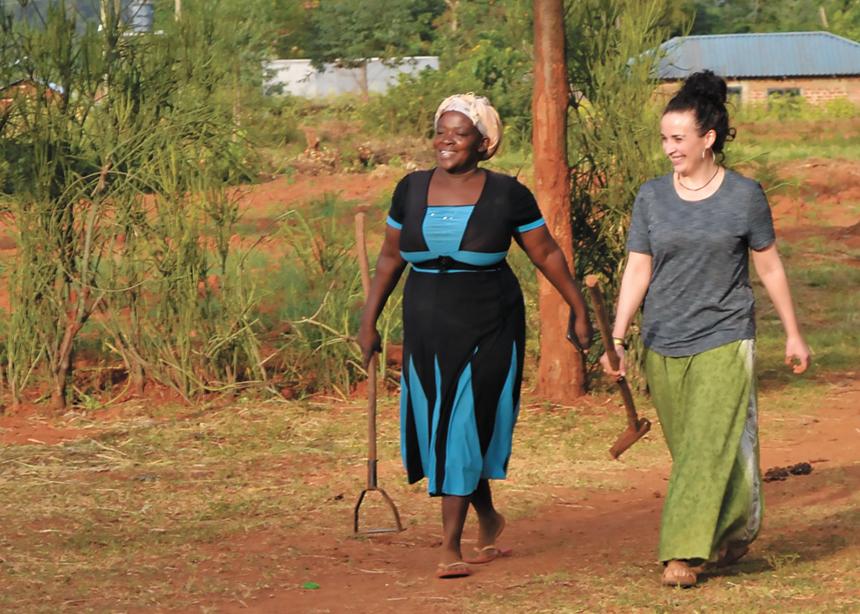 Colleen Dyck of Niverville, Man., right, visited and worked with Lucy Anyango on her farm in Busia, Kenya. ‘[Lucy] is a role model not just to her community, but to me,’ says Dyck. (Photo by Meagan Silencieux)

A full house of more than 200 people gathered at the Park Theatre in Winnipeg on Oct. 15, a day before the United Nations-designated World Food Day, for the release of a new documentary by the Canadian Foodgrains Bank.

The 23-minute film, Common Strength, documents the cross-continental meeting of two female farmers and highlights the vital role women share in ending hunger around the globe. The premiere featured a screening of the film, live music and a panel discussion with film subjects and Foodgrains Bank staff.

Almost half of the world’s farmers are women, and Colleen Dyck and Lucy Anyango are two of them. Dyck, of Niverville, Man., visited Anyango at her farm in Busia, Kenya, for seven days last March. While the video crew followed them around, the two women worked in the dirt, went to the market and got to know each other.

Dyck and her husband Grant farm the 5,700 hectares of grain and oilseed that is Artel Farms Ltd. She is also the CEO of her own business, GORP (Good Old Raisins and Peanuts) Clean Energy Bar, and has four children. Artel Farms has been supporting the Foodgrains Bank for more than two decades. In 2015, the family started Grow Hope, an initiative with the Foodgrains Bank and Mennonite Central Committee that farms up to 120 hectares acres of sponsored land and donates the proceeds earned from the harvest. It has been running every year since then.

Anyango is a community health worker and farmer who grows crops on just under a hectare of land. She and her husband have five children. Through a Foodgrains Bank-supported project, she has learned conservation agriculture practices that have increased her crop size and resilience, helping her to feed her family and sell the surplus. She is now a conservation agriculture trainer, and teaches these techniques to people in her community.

Dyck had no idea what to expect when she got off the plane and stepped onto a continent that she had never been to before. But she quickly realized that there were core similarities between herself and Anyango.

“We are both mothers,” she says. “[Lucy] works the land, she is a farmer, and we both depend on the weather for our livelihoods.”

There were plenty of differences, too, which led to eye-opening experiences. Scenes of Dyck shrieking as she killed a chicken for the first time, and struggling to carry a water jug on her head while Kenyan women easily balanced theirs without using their hands, elicited laughter from the audience.

A difference Dyck didn’t expect was the barriers that Kenyan women in agriculture face. Women are often restricted from owning land or making decisions about what to do with it. “Often women will go to seminars and learn about better farming practices, but then they find it difficult to implement new practices because, as a woman, they don’t have a lot of say in those matters,” she says.

Research done by the Food and Agriculture Organization of the United Nations says that, if women farmers had access to the same resources that men do, their yields would increase by as much as 30 percent, and global hunger would decrease by up to 17 percent.

Despite challenges, Anyango is resilient and strong, working tirelessly to improve life for her family and community. “She is a role model not just to her community, but to me,” says Dyck.

The Canadian film crew felt lucky to have been welcomed so warmly by the Kenyan community, says Meagan Silencieux, the Foodgrains Bank’s public engagement officer. They worked with a team of local filmmakers, whose knowledge of the language, culture and country was invaluable for the filmmaking process.

Dyck, too, was impacted by the radical hospitality shown to her by Anyango and her community. “It’s made me take pause and consider how I welcome visitors in my own community,” she says. It has inspired her to turn off the radio, put down her phone and get to know her neighbours.

Gordon Janzen, the Foodgrains Bank’s Manitoba and northwestern Ontario regional representative, encourages churches and small groups to watch the documentary and allow it to open up discussions.

Food justice is an issue of faith because “food is distributed unequally around the world, and, while hunger is present in Canada, there is a disproportionate number of hungry people in other parts of the world,” he says. “I think it takes eyes of faith to see that hunger rather than ignore it. Faith propels us into action.”

“We’ve all been created equally in the eyes of God and he loves us all the same,” says Dyck. “The greatest command is to love your neighbour as yourself. If you’re not hungry, your neighbour shouldn’t be hungry.”

Common Strength is available for people to host viewings across Canada. For further information on hosting a screening, email foodjustice@foodgrainsbank.ca. 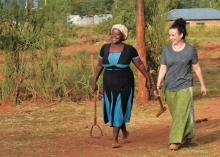 Colleen Dyck of Niverville, Man., right, visited and worked with Lucy Anyango on her farm in Busia, Kenya. ‘[Lucy] is a role model not just to her community, but to me,’ says Dyck. (Photo by Meagan Silencieux) 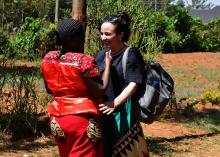 Colleen Dyck of Niverville, Man., right, visited and worked with Lucy Anyango on her farm in Busia, Kenya. (Photo by Meagan Silencieux)