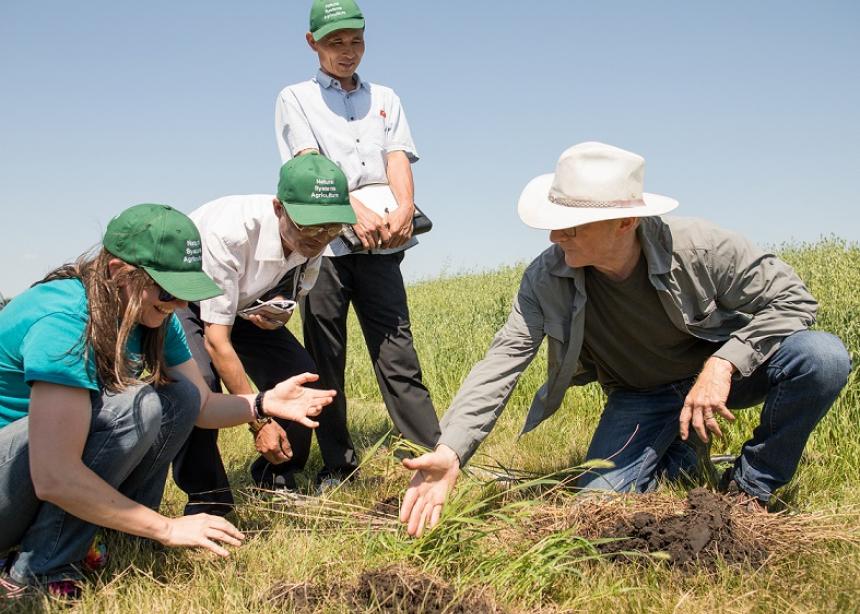 In those first few minutes after arriving at Syl’s Restaurant in Carman, members of a delegation from North Korea sit at the edge of the outdoor eating area, where they see local resident Rene McFarlane at a picnic table with her son Lane. The visitors move toward McFarlane and, with the help of a translator, a conversation about families in both countries begins.

Chris Rice, a Mennonite Central Committee (MCC) representative for Northeast Asia, calls this opportunity to build relationships person-to-person “a gift on the pathway to peace.”

“It may be the only place in the world that day where a Canadian and a North Korean engaged one another in this way, talking family to family,” he says. “In this way, small but powerful seeds of hope are planted.”

The delegation was one of two that came to Manitoba in the summer of 2018. Hosted by MCC, they focussed on learning about agricultural research and farm practices in the province.

In June, officials from the Korean Canadian Cooperation Agency visited a University of Manitoba agricultural research station and a local farm.

Ambassador Ri Yong Phil of the North Korean Mission to the UN in New York was part of the delegation. He says there are similarities in climate between Manitoba and North Korea, but there are also significant differences. “We have limited arable land and we cannot leave it vacant. We have no option but to plant corn and rice,” he says. “So we can learn about conservation agriculture in Canada and about ways of co-operating between countries.”

The second delegation of mostly agricultural scientists arrived in July, led by Kim Sang Il, who specializes in genetics, crop breeding and crop management. Members spent time with several Canadian agricultural scientists and visited a large organic commercial farm. Kim says North Korea and Manitoba have some common farming practices, but the age of their soils is very different.

“Manitoba has younger soil, more humus content. It hasn’t been in production as long,” he says. “In [North Korea] we have farmed for several thousand years and our soil is degraded. We are very much concerned with this.”

Kim say that’s why North Korean scientists are interested in how Manitobans restore and nourish farmland. “Science is our common language, a universal language,” he says.  “After we go back to [North Korea], we will work out a plan and implement it. And now that we know Canadian scientists, we can talk to them about it.”

“Regardless of the politics of the situation, there’s a common mission, a moral imperative of compassion for the vulnerable,” Rice says.

After 70 years of isolation and historical tension between North Korea and the United States, Rice says Americans and North Koreans are “profoundly misinformed about each other.”

MCC hopes to change that by giving people the space to build relationships person-to-person. While that’s not currently possible in the States, it can happen in Canada.

“It’s seeking change through contact,” Rice says. “In exposing multiple stories about North Koreans, and in North Koreans relating to others, we can imagine that the way things are right now is not the way it has to be in the future.” 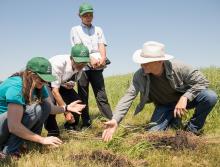 Donna Rice, MCC representative for Northeast Asia, and Ambassador Ri Yong of the North Korean Mission to the United Nations, and others share a meal at the home of Charlotte and Ernie Wiens in La Salle, Man. (MCC photo by Matthew Sawatzky)