Pastor brings eyeglasses to communities around the world 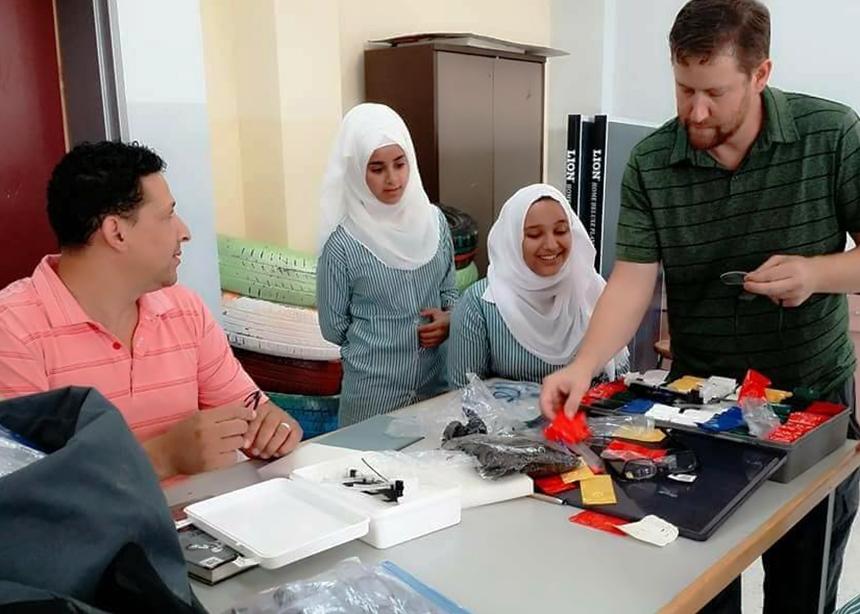 Greg Wiens assembles glasses on a trip to the West Bank with MCC in 2018. (Photo courtesy of Global Vision 2020 and Multiply)

Adjust the dial. Pick a colour. Pop, snap. A new pair of glasses is ready to wear in five minutes.

This is the project of Global Vision 2020 (GV2020), an organization based in the United States, that works internationally to screen vision and distribute prescriptive eyeglasses to the 2.5 billion people who need them but don’t have access to an optometrist.

Greg Wiens of Winnipeg is GV2020’s faith-based outreach coordinator. He reaches out to faith-based organizations and churches, providing the necessary supplies and training to help them bring glasses to a GV2020 project or a project of their own.

Together with more than 20 organizations like Mennonite Central Committee (MCC), World Vision, Operation Mobilization and many individual churches, GV2020 has reached 38 countries so far. In 2019 alone, the organization delivered 50,000 pairs of glasses. It has been awarded the Inventors Guild of America Award for Best New Innovation in Social Justice, the European Union’s Aid Exhibition Innovation of the Year Award and the million-dollar WeWork Creator Award.

Wiens grew up at Glenlea (Man.) Mennonite Church. He has spent the last 20 years as a Mennonite Brethren pastor in Manitoba and Saskatchewan. In addition to GV2020, he now works as a missions mobilizer for Multiply (formerly MB Mission).

He became involved with GV2020 in 2009, when he read about the organization in a magazine and later had a persistent dream that in the future the idea had died because nobody promoted it. He believed God was directly calling him to take part in this work.

Wiens got in touch with Kevin White, founder and executive director of GV2020 and a retired U.S. Marine and Naval Academy graduate. White began tackling the issue of poor vision and eye care in 2005, when he was director of humanitarian and civic assistance while on active duty. The two soon became good friends and colleagues. “He is a brilliant man, who God has used in such a significant way,” says Wiens of White. “He’s an exceptional man of peace.”

Wiens says a lot of Mennonites he’s talked to about the organization have expressed their discomfort with White’s involvement in the military. “But God chooses who he chooses to use, God works in a way that he chooses to work,” says Wiens.

White invented the USee device, a pair of glasses with adjustable dials and colour-coded numbers, that has made fitting glasses a simple process that takes only a few minutes. Wearers put on the USee, look at an eye chart and turn the dial, changing the prescription until they can see clearly. The glasses technician then takes pre-cut lenses that correspond with the colour and number on the USee and snaps them into the frame of the wearer’s choice. The glasses are durable, stylish and cost only about $3 per pair.

In the last decade, Wiens has travelled all around the world setting up these eye-care stations, including in Cambodia, the Philippines, Palestine and Malawi. He has seen first-hand the effects of the organization and God at work.

Just a few months ago in Zimbabwe, Wiens helped a legally blind man get glasses, and with a negative six prescription, he walked away seeing well enough to pass a North American drivers eye exam. The man had been working in construction for only five weeks when he let Wiens know that he wanted to start his own furniture-building business. Those glasses enabled him to work and literally changed his life, says Wiens. “That trip was worth getting him alone some glasses.”

GV2020’s work in Zimbabwe and Zambia is through joint projects between MCC and Multiply. They also run peace clubs for youth and leadership, and Wiens says they are exploring agriculture projects for 2020.

Wiens’s first collaboration with MCC was to Palestine last year. Distributing glasses standing in the same place where Jesus walked and went on trial was a surreal experience, he says.

GV2020 trains local people how to test vision and make the glasses, so they can run the program on their own. In Malawi, refugees have used the money they are making from the glasses centre to make down payments on farmland. Working with MCC and Multiply’s joint agriculture project, they have planted more than 10,000 trees, many of them fruit-bearing, and test plots for five different drought-resistant crops, to adapt to the effects of climate change.

Wiens visited Malawi in November, along with six farmers from Mennonite Church Canada, MB and Bergthaler churches, all coming together to bring agricultural education and assistance.

“All of this is done in the name of building the local church,” he says. The MB church in Malawi started with four people and, in its 12 years of existence, has grown to 19,000. The church works holistically, preaching the gospel, educating on trauma care and counselling, starting agriculture projects and providing eyecare.

In Zambia and Zimbabwe, Mennonites from all different denominations and people with no Mennonite background at all have come together to form a huge church community. People see that “God is moving here in a mighty way,” Wiens says. 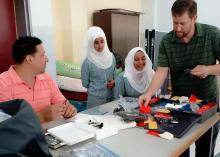 Greg Wiens assembles glasses on a trip to the West Bank with MCC in 2018. (Photo courtesy of Global Vision 2020 and Multiply) 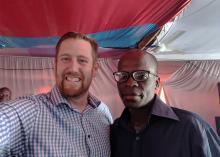 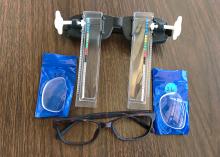 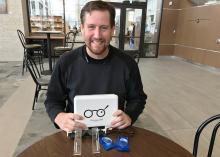 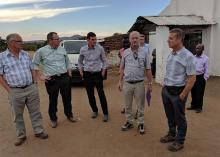 Mennonite farmers travel to Malawi with Greg Wiens as part of the joint project between MCC and Multiply. (Photo courtesy of Global Vision 2020 and Multiply) 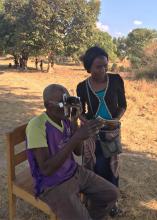 Refugees in Malawi who are trained and certified to be eyeglasses distributors carry out vision tests. (Photo courtesy of Global Vision 2020 and Multiply)