‘In pursuit of God’s peaceable kingdom’ 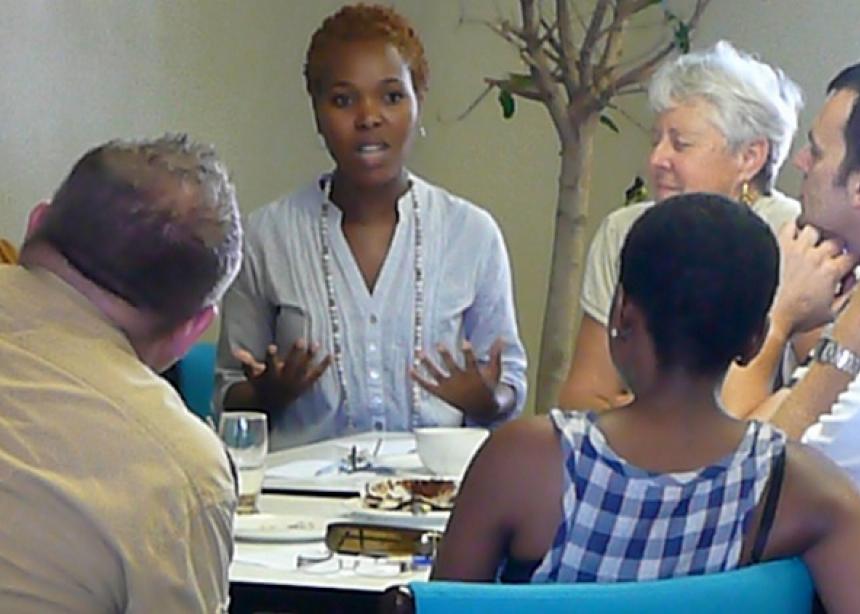 People converse at a dialogue organized by the Anabaptist Network in South Africa in Cape Town. (Photo by Andrew Suderman)

Mennonite World Conference (MWC) member churches around the world act out of the belief that the Spirit of Jesus empowers them to become peacemakers who renounce violence, love their enemies, seek justice and share their possessions with those in need through local congregations, national churches and related ministries.

“Finding ways to connect, encourage and have these Anabaptist peace organizations be in solidarity with one another in our common work towards peace has given rise to the emergence of a Global Anabaptist Peace Network.”

Two multi-year grants are providing seed money for this emerging network. The Kindred Charitable Fund from Kindred Credit Union, based in Kitchener, Ont., awarded $7,500 in 2017, $5,000 in 2018 and $2,500 in 2019 for the new network. The Anabaptist-rooted United Service Foundation also awarded a significant three-year disbursement to support the network’s establishment.

• Appointing Andrés Pacheco-Lozano, a Colombian peace worker currently studying in the Netherlands, as network coordinator in October 2017; and
• Facilitating the first face-to-face meeting of the newly formed network steering committee at the MWC General Council meetings taking place in Kenya in April 2018.
• The MWC Peace Commission hopes to formally launch the network at the Global Mennonite Peacebuilding Conference and Festival in Amsterdam in 2019.

A 2016 proposal identified four potential tasks for the network:

• Sharing prayer and advocacy requests;
• Sharing news/information/stories about peace work;
• Developing a member directory; and
• Creating space, both electronic and physical, “where those who are part of the network can meet, connect and build mutually transformative relationships,” says Suderman.

“To see the [network] become something that is truly global in nature takes patience and investment,” says Arli Klassen, MWC’s chief development officer. “We are grateful for donors—individuals, organizations like Kindred, and the family foundation, who gave a multi-year grant—who share that vision.”

The new network will relate with MWC’s structure through the global church’s Peace Commission. “While the Peace Commission focusses on supporting our MWC member churches,” says Suderman, “the [network] will seek to connect those churches’ peace-related organizations, programs and workers. In this way, we continue to walk with and support one another in the pursuit of God’s peaceable kingdom.”

People converse at a dialogue organized by the Anabaptist Network in South Africa in Cape Town. (Photo by Andrew Suderman)