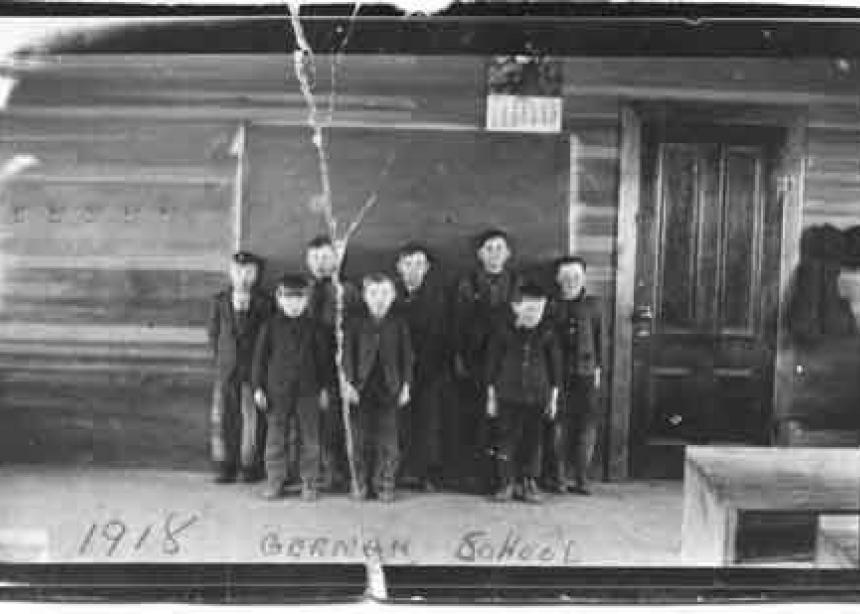 This is a photo of the privately run Mennonite school in Neu Kronsthal, Man. John Kroeker (1910-82) is front row far right, and his brother Klaas Kroeker (1907-92) stands behind him. Mennonites coming from Russia in the 1870s were promised freedom of education as well as freedom of religion, believing it was the role of the church and family to educate children, not the state. Government tolerance for these schools soon dried up. Some Mennonite parents in Manitoba and Saskatchewan who did not send their children to public English schools were fined and had property confiscated, while others served jail time. By 1918, there were 50 prosecutions in Saskatchewan. Manitoba Premier Rodmond Roblin stated in 1906 that the immigrant “who objects to perpetuating the glories of our flag and declines to have his children infused with British patriotism, is a man that is undesirable.”

Hi, I'm seeking information on Klass Kroeker. I know that he was an ordained pastor and was part-time pastor of the Horse Lake Mennonite Church at Duck Lake, Saskatchewan, from early 1940's until 1955, when he moved away to British Columbia. I'm having trouble tracing him back as I don't know when or where he was born and who his parents were.
I'm wondering if the Klaas in this photo is also the Klaas that was the pastor as mentioned above. My interest in him is because he is my cousin's great-grandfather, and I am trying to trace his family tree for him along with any historical details/stories. Any help that can be given would be very much appreciated. Many thanks in advance, Juliette