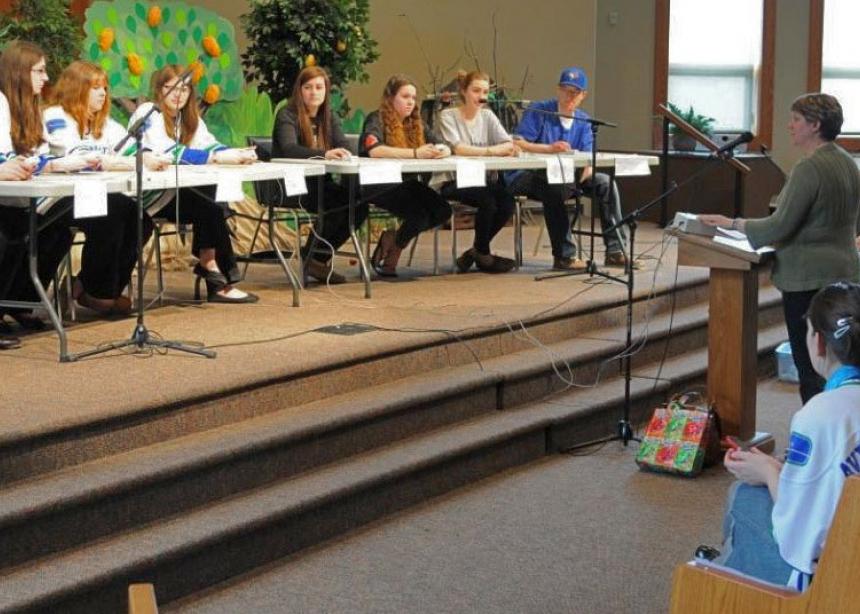 For about 30 years, youth from several Mennonite Church Eastern Canada congregations in Ontario have looked forward to their annual Bible quizzing event. It’s centred around friendly competition, memorization of minute biblical details and application of biblical principles to everyday life.

Competing in pairs until a winner is chosen, Bible quizzing teams are asked 23 questions on a particular book of the Bible. The first team to hit the buzzer and answer correctly gets the point. In the middle of the match, the teams work on two long-answer questions; after discussion among themselves, a representative from each team is elected to present the answer. The team gets points for accuracy and applicability to everyday life.

The winning team gets bragging rights, while a special contestant who demonstrates particular skill gets a $500 scholarship to either Canadian Mennonite University (CMU) in Winnipeg or Conrad Grebel University College in Waterloo, Ont.

Studying, competition are lots of fun

Liv Cento is participating in this year’s quizzing tournament, to be held at Rouge Valley Mennonite Church, Markham, on April 11. The 17-year-old attends Hawkesville Mennonite Church, whose team won last year’s event, and she took home the scholarship. Cento isn’t certain what her plans are after high school, but says she may use the scholarship to take classes at Grebel.

Cento says she’s really looking forward to the upcoming event. It will be her fourth year and each year she really enjoys studying the Bible with the others on her team.

“We put in about three or four months of preparation,” she says. “We look into the book [of the Bible] more deeply than you’d normally look at texts.”

Rebecca Steiner was a Bible quizzing contestant from 2005-07 when she lived in Stouffville, and she helped organize the 2009 competition. Steiner says it’s a little nerdy, but her youth group always had lots of fun studying for, and competing in, the competition.

“It brought our youth group closer together,” she says. “We hung out and were in an intensive manner for those months leading up to it.”

Jeramie Raimbault competed as a youth, too, but is now a volunteer on the Youth Bible Quizzing Task Group. He says he sees the value of the competition first-hand. “It provides motivation for people to intensively study a book and know minute facts,” he says. “It’s great to meet people from other congregations to get to know more youth from around your area. It’s something that combines competitive spirit and spiritual learning, which I feel don’t get combined very often.”

Raimbault says the competitive spirit promotes an interest in the Bible and biblical teachings, at least for him.

“When I was competing with Hawkesville, we always had a big rivalry with Markham,” he says. “It drove us to try harder, memorize more. We know we need to study the Bible, it’s a great resource. But sometimes reading for the sake of reading . . . it can be a bit dry. The competition motivates us to read more, and that’s a good thing.”

But Bible quizzing seems to do more than just promote an interest in reading Scripture.

Steiner says she now knows Matthew, Acts and Joshua in great detail, thanks to her time participating in Bible quizzing. But it also helped her recognize her pastoral leadership skills.

“One time when I was Bible quizzing, an elderly man came up to me after I presented our long answer and asked, ‘Have you ever considered being a pastor?’ I think seeds were planted that pastoral leadership was something I could do,” Steiner recalls.

Until recently, Steiner worked as the enrichment coordinator at Community Mennonite Church in Stouffville, where she was involved in worship planning and leadership.

Cento says her public speaking skills have improved since participating in Bible quizzing. “The whole experience is a confidence booster for leadership,” she says. “You’re helping the team to prepare, and everyone encouraging each other. The questions where you have to present, those are hard at first because everyone’s watching and you kind of have to make up some of it on the spot. But it helps to show that I can do those kinds of things.”

Cento is very excited to compete in the upcoming event, which will focus on the Gospel of John, saying her team has logged “a lot of hours” studying John.