My cousin couldn’t manage the pain 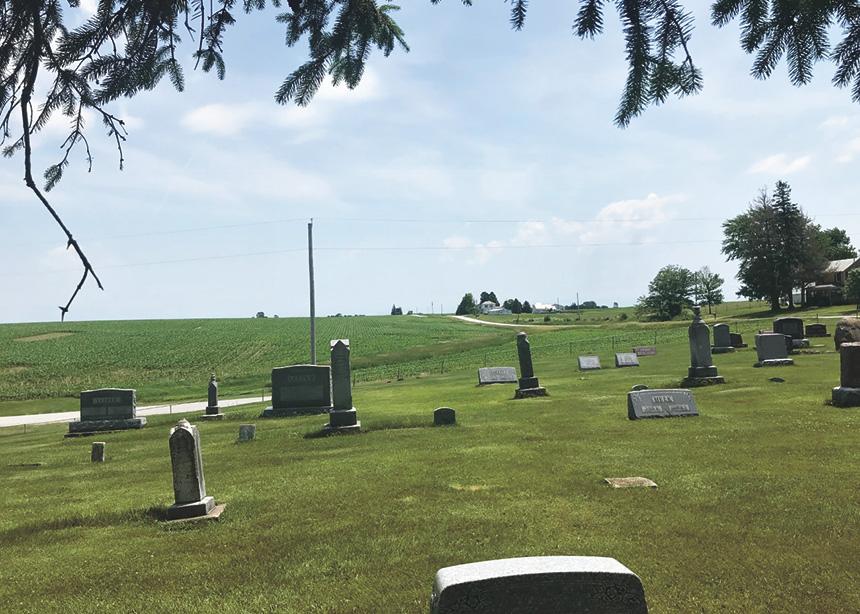 The family buried Richard’s ashes on Easter weekend. Richard had purchased his headstone years earlier, his quirky sense of humour coming through with ‘Hello world’ preceding his birthdate inscription and ‘Goodbye world’ ready for the addition of his date of death. (Photo by Amy Rinner Waddell)

Note: This reflection deals with the subject of suicide.

On Nov. 27, a Saturday, I received a long text message from my cousin Richard (I’m using only his middle name here, for privacy), also sent to other extended family members. “I hope none of you ever have to go to a pain-management clinic,” he began. “They are a joke and out for money.”

Richard, who had been battling cancer and severe back pain for several years, went on to reflect about the inadequacies of the health-care system for managing pain, starting with the patient being steered to a psychologist to talk about pain instead of getting a prescription for medication because of the danger of addiction.

“If you are in pain for a long time, you will start to think, ‘How can I escape the grip this pain has on me?’ If you are in severe pain, you don’t smile, and depression sets in.” His last line was, “God forbid, I hope none of you ever have to be told to go to a pain-management clinic.”

Richard was a fun cousin who gave me my first motorcycle ride. He had an extensive music collection and sometimes sent me CDs he’d made of music he thought I’d like. Richard did not text often, but I always appreciated hearing from him. “I really must call or text him soon,” I told myself.

I never got the chance. The next day, minutes before walking in to the Sunday morning church service, I happened to check my phone and found a message from his sister that Richard had taken his life the previous evening.

I remember everything around me moving in slow motion as I tried to absorb the shock of losing my cousin in such a horrific way. This was the first Sunday in Advent and the theme, ironically, was “hope.”

All I could think about was Richard, who had so little hope of alleviating the pain in his body that he chose this way out. He left no other note; his message to all of us was obviously his way of explaining the reason for the act he planned later that day.

A hole was left in the family with no chance to say goodbye to Richard. We were left in shock as we contemplated the thoughts that must have beset him to do what he did to escape his pain, and we wondered if anyone could have prevented it.

The family buried Richard’s ashes on Easter weekend. Richard had purchased his headstone years earlier, his quirky sense of humour coming through with “Hello world” preceding his birthdate inscription and “Goodbye world” ready for the addition of his date of death.

It was reassuring to realize that the cloud that hung over Richard at the end did not characterize his whole life.

A longtime friend, Jim, spoke at the graveside service about how the two had met at work more than 40 years ago: “Richard had a joy of living, a peace about him. So I asked, what made him tick? He told me he was a Christian. That wasn’t what I wanted to hear!” Jim was a recovering alcoholic who had renounced God earlier in his life. He said that Richard gave him Christian tracts and a Bible to read, but never once pressured him to do anything different. Eventually, Richard’s witness opened the door for Jim to question and change his own life. Richard invited Jim to a Christian motorcycle rally, where Jim received Jesus Christ as his Saviour and Lord.

“Richard was the man that God put in my life at just the right time, so that I could walk in freedom from addiction by the power of Jesus Christ,” said Jim, who went on to become active in his church and ministered to prisoners in the local jail. He said he was eternally grateful to Richard for his positive influence that changed his life.

We will never understand the dark place in Richard’s mind that caused him to end it all. The end of his life was marked by depression, but it was comforting to hear how the rest of his life was a force for good in a way he probably never fully comprehended.

Amy Rinner Waddell is CM’s B.C. correspondent. Do you have a story idea about Mennonites in B.C.? Send it to bc@canadianmennonite.org. 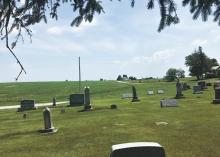 The family buried Richard’s ashes on Easter weekend. Richard had purchased his headstone years earlier, his quirky sense of humour coming through with ‘Hello world’ preceding his birthdate inscription and ‘Goodbye world’ ready for the addition of his date of death. (Photo by Amy Rinner Waddell)