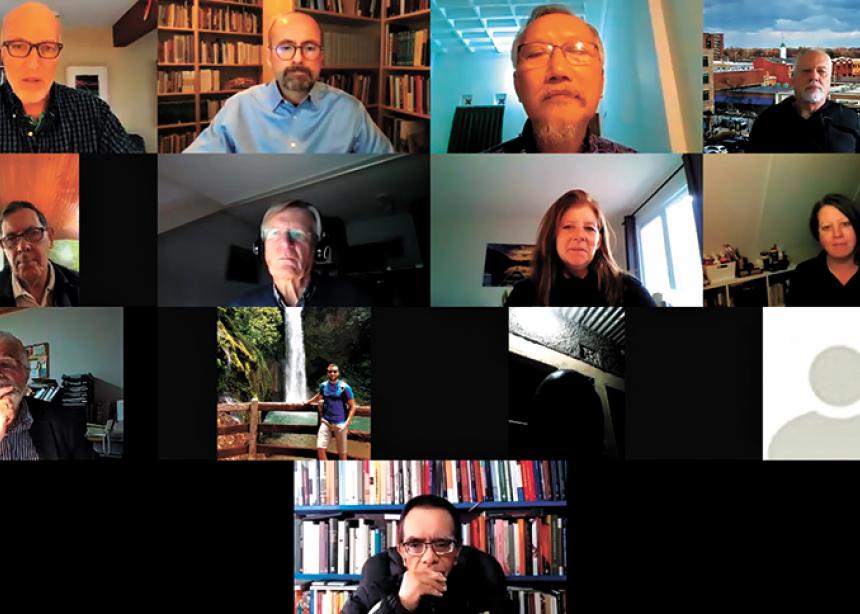 Deliberation of the proposal to accept new emerging networks into MWC’s structure occupied much of the meetings. The peace, health and education networks would expand MWC by creating an official relationship with their member organizations.

“The idea of networks is coherent with our vision cast in 2009 to be a global communion,” said César García, MWC’s general secretary. “Networks draw together Anabaptist agencies to exchange experiences and resources to improve their own work.”

In 2009, the General Council created four commissions­—Deacons, Faith and Life, Mission, and Peace—to enrich the church. It projected future expansion to include networks that connect Anabaptist specialists in fields like education and health.

Although the networks’ operating funds flow through MWC, the networks would be responsible for their own fundraising through membership fees or grant applications. Each network would have a part-time staff coordinator and representation on a commission.

Two networks are already part of MWC’s structure, through the Mission Commission. The Global Mission Fellowship has 71 members from Anabaptist church agencies involved in evangelistic, disciple-making and humanitarian/social activities. The Global Anabaptist Service Network has 57 members from church agencies and organizations committed to the holistic gospel of Jesus Christ and the mission of the church through service ministries.

“This proposal is in line with how MWC works—from the bottom up,” said Carlos Martínez-García, a Latin American representative. “This is a way for the experts in these agencies to share their gifts with the global family.”

“It gives us more capacity,” said Lisa Carr-Pries, although she cautions setting up leaders for a task that is too large.

“There are risks to increasing the size and complexity of MWC’s structure,” said J. Nelson Kraybill, president of the Mennonite World Conference. “However, these networks are already going. We are delighted to take the opportunity to have them collaborate with MWC.”

“‘God has anointed us to bring good news to the broken-hearted . . . and proclaim the year of God’s favour,’” said Kraybill, quoting Isaiah 61:1-4. “The past 10 months of COVID-19 have been disorienting,” he said but noted how the narrative of the Old Testament shows God’s faithfulness to his people despite great hardship.

In many of MWC’s national member churches, there are unemployment and hunger from shortages of food and income. This has led to contributions from member churches that are below budget, Len Rempel, MWC’s chief operating officer, reported. “We’ve been encouraged that, despite their difficulties, churches have responded saying, ‘We are struggling but still want to do what we can to participate in the global church.’”

MWC’s income level is behind previous years, however, due to the cancellation of all travel since March; spending is also lower than in the past. Up to 40 percent of MWC’s annual donations are usually received in November and December.

The postponement of the international assembly to 2022 results in an additional year of expenses. Without making adjustments, Rempel projected a $150,000 deficit for the assembly.

The COVID-19 response fund—an extra-budget project in 2020—raised some $400,000 in collaboration with a dozen Anabaptist mission and service agencies. Member church projects brought emergency relief to their communities in need of food and hygiene supplies due to the pandemic.

The Executive Committee recommended further revision to a document the Peace Commission created on conscientious objection. This statement will go to the General Council for approval in 2022.

MWC has three kinds of official documents—statements, teaching resources and guidelines—all of which are located in the Reference Notebook, a resource for General Council and Executive Committee leaders.

The Executive Committee approved revisions to the policy document on appointing specialists to MWC commissions.