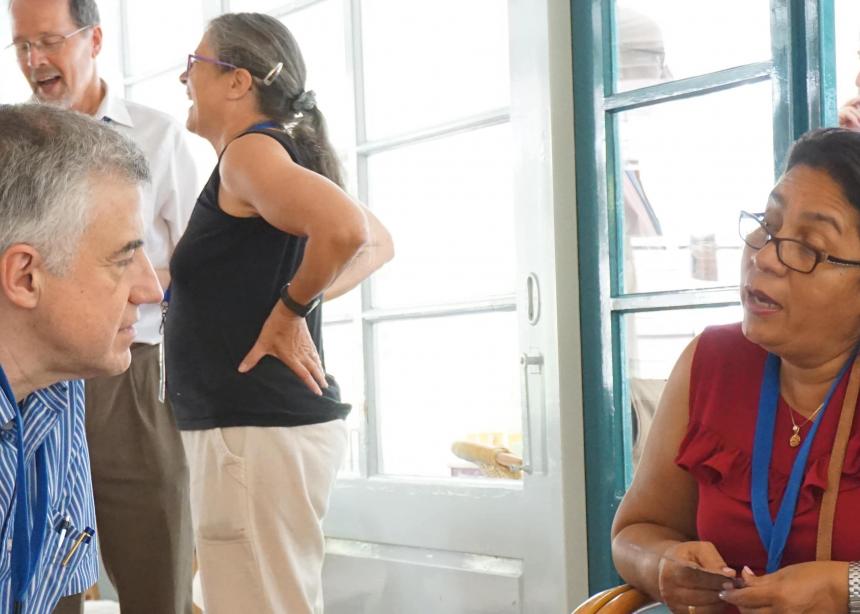 Approximately 40 leaders and members of the four Mennonite World Conference (MWC) commissions met together in the Netherlands for three days in late June for a time of face-to-face discussion, reflection, worship and strategic planning to advance the mission of MWC.

They met at the Mennonite Conference Centre in Dopersduin, one of three retreat centres run by the Dutch Mennonite Church.

Commission members are volunteers from around the world who represent the MWC General Council or bring expertise in caring, service, theology and peace work.

“Faith and Life Commission is helping MWC as a brain, as a theological commission to maintain our identity and practise what we believe,” says Tewodros Beyene of Ethiopia.

Larry Miller of France, the secretary of the Mennonite delegation for the Trilateral Dialogue with Lutheran and Catholic churches about baptism, reported to the commission on the document arising from the five-year dialogue concluded in 2017.

“Catholics, Lutherans and Mennonites express themselves differently in different parts of the world,” said Rebeca Gonzalez Torres of Mexico. “The faith lives and experiences of each group are permeated by the local culture and history. Even so, through education processes that take that into account, they can incorporate new ideas. It has not been easy to talk about three historic baptism traditions associated with the Catholics, Lutherans and Mennonites, not now or in the past. We value and are grateful for all the work and the process that have led to this document.”

The commission recommended creating spaces where MWC member churches might learn from each other’s understanding and practice of baptism in their local settings, presenting the Trilateral Dialogue on Baptism’s official report to the General Council and producing a study guide for churches to accompany the report.

The Faith and Life Commission also discussed a document about the doctrine of justification and continued working on the possibility of a name change to better reflect all members of MWC, not just Mennonites.

The Mission Commission reported on the progress of translation on God’s People in Mission: An Anabaptist Perspective, forthcoming in Spanish this year and in French next year; assigned Missional Frontiers profiles from 2019 to 2021; and began planning the 2021 global consultation of the Global Anabaptist Service Network and the Global Mission Fellowship, both comprised of Anabaptist agencies serving the church and the spread of the gospel around the world.

“We need each other’s strength and gifts in order to serve together,” said Andi Santoso of Indonesia. “One of the most challenging things that we discussed during our meeting was about the need for sharing our resources to others who are in need.”

“We want to keep our family united with things that are going on,” said José Arrais of Portugal, coordinator of both the service network and mission fellowship, as different concerns stem from the specifics of local situations. “It’s important to have feedback so we can interconnect.”

“As we work through these agencies, they are involved in various ministries of justice,” said Nelson Okanya of the United States.

“As a member of Deacons Commission, I was invited to walk with them in this joyous moment and experience the joy of sharing with our Anabaptist brothers and sisters around the world,” said Rao.

A church building was a dream come true for Antakya (Antioch) Mennonite Church, part of Bhartiya General Conference Mennonite Church, whose farmer and labourer members were not able to save enough to construct their own meeting place.

The Peace Commission worked on documents for approval by the General Council, including a statement on conscientious objection, prepared for the launch of the Global Anabaptist Peace Network, and considered next steps on the Children on the Move initiative.

“Our agenda sought to focus us on real issues facing us in the church,” said Wendy Kroeker of Canada. “The work of the Peace Commission seeks to articulate theological foundations—and create meaningful discussion—for Anabaptists/Mennonites on issues facing us in society and within our own church communities.”

“Our work grows out of direct places where the church around the world is experiencing difficulty in living their faith as we understand it,” said Ken Hoke of the United States. “It is good to be able to come alongside with sisters and brothers.”