‘May God sustain us together’ 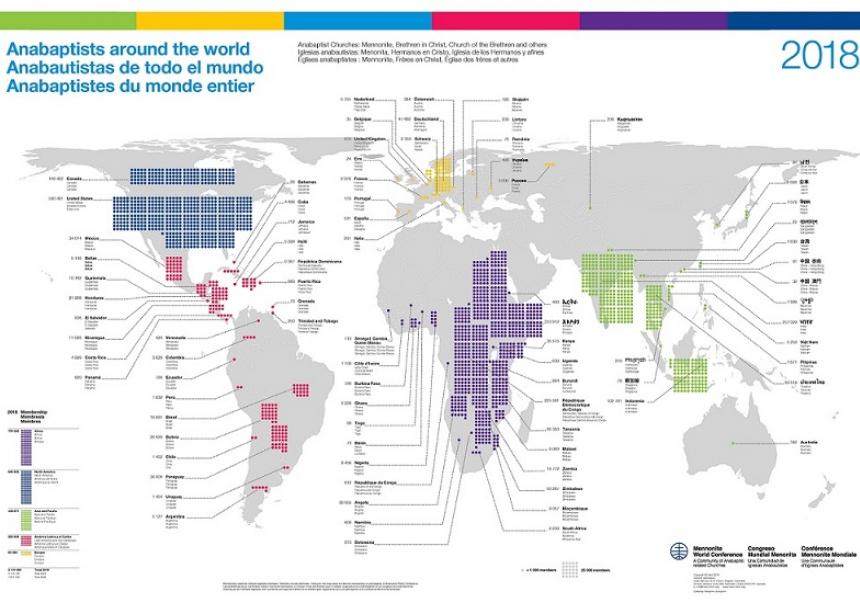 Every three years, MWC collects information from its members, showing the growth—or decline—of national churches around the world in member churches and those who are not members or are on the path, like Uganda Mennonite.

Overall, Anabaptism worldwide has grown by 1 percent, to 2.13 million baptized members in 86 countries, while MWC member churches have grown by 2 percent.

Much of the growth in Anabaptist-Mennonite congregations can be seen in the Global South, in national churches like Uganda that are springing up in the hinterlands outside cities. Growing greatly in number, Uganda Mennonite Church congregations face many challenges: buildings with no windows, barely covered by a roof; lack of chairs for church members to sit on during services; pastors who have no formal training and sometimes no paycheque.

Asia and the Pacific saw a 2 percent growth in baptized members, although the number of baptized MWC members decreased slightly. Greater precision in reporting accounts for some of the decreases reported in countries such as Indonesia and Vietnam. Bharatiya Jukta Christa Prachar Mandli, an Anabaptist church based in Kolkata, India, shows the greatest increase: 36 percent growth, from 2015’s 2,725 baptized members to 4,260 in 2018.

In Venezuela, where economic collapse has made daily life difficult, MWC associate member church Casa de Restauracion y Vida Shalom saw its members fall by more than half, from 250 in 2015 to 120 in 2018.

Europe, cradle to Anabaptist faith, incurred losses in historic areas, like the Netherlands, where the Algemene Doopsgezind Sociëteit fell from 7,650 members in 2015 to 5,725 in 2018. However, new expressions of Anabaptism are growing in Albania and Spain. The former grew exponentially, from 30 baptized members in 2015 to 120 in 2018, while Anabautistas, Menonitas y Hermanos en Cristo in Spain increased from 376 to 501, aided by mission work from Amor Viviente of Honduras.

In North America, Mennonite Church U.S.A. reports a 33 percent decrease in baptized members, as Lancaster Mennonite Conference left the alliance to form a separate conference. Several other national churches report slight decreases overall, while the Conservative Mennonite Conference in the United States showed 2 percent growth. The Be in Christ Church of Canada (formerly Brethren in Christ) is growing steadily, with approximately 17,000 attendees in 2018.

“The Mennonite Church Uganda is quite happy and honoured to be member of the global family of the MWC,” says Okoth. “May God sustain us together.”

The MWR report identified the same statistics regarding worldwide growth, with a corresponding decline in Europe and North America. The optimistic title of the article is based in fact for the Anabaptist communion outside of NA and Europe, and considerably less so for the conferences in North America. Does the Canadian Mennonite care to explore that fact?

This report was submitted by Mennonite World Conference and includes data on the declines in Europe and N. America. Canadian Mennonite continues to pay attention to the numbers and trends. For more on the decline of N. American churches, see the research of Reginald Bibby and Joel Thiessen. You can read a CM review here: “Future of the church appears grim.”—Executive Editor

Thank you for referencing Mr. Bibby and Mr. Thiessen's work. I would observe that no commentator within the circle of Canadian Mennonite contributors has sought to apply these insights, or ponder their consequences for MC Canada. I submit that observing and pondering these questions would serve the MC Canada constituency.