Mukawa calls for reconciliation with God, others 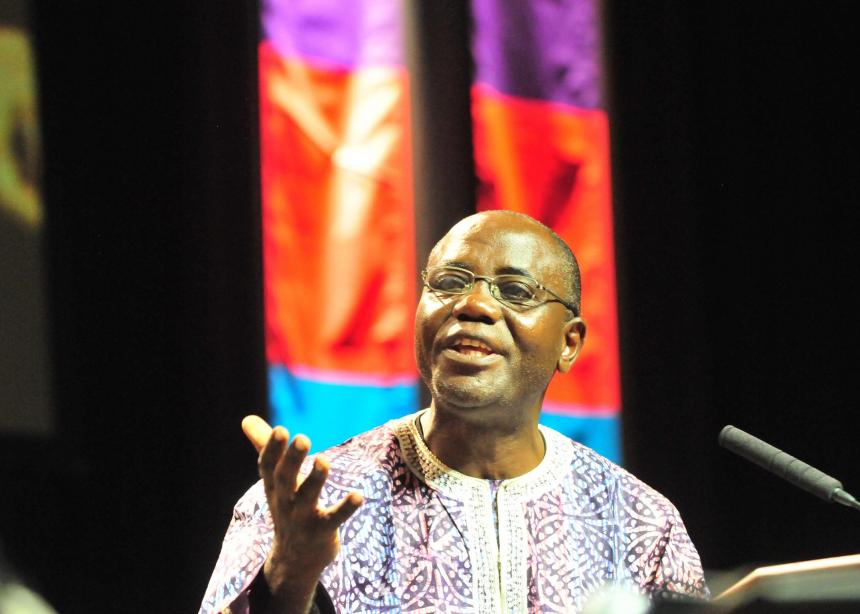 <p>Nzuzi Mukawa, a Congolese Mennonite Brethren pastor and educator, preached on walking with conflict and reconciliation. He highlighted the biblical character Abigail as an example of faithful peacemaking. (Photo by Dale D. Gehman)</p>

Nzuzi Mukawa, a Congolese Mennonite Brethren pastor and educator and the MB Mission team leader for Sub Sahara Africa, challenged his audience Thursday evening to leave Mennonite World Conference Assembly as men and women who are reconciled with God and with others.

Mukawa’s text was I Samuel 25:1-35, the story of David, Nabal and Abigail. The conflict in this text, said Mukawa, begins with one person—Nabal, a rich but insensitive man who had a bad heart. When Nabal rejects David’s request for help, David decides to seek revenge. The resolution to this conflict also begins with one person—Abigail, a beautiful woman with a good heart. When David accepts her gift of reconciliation, the conflict is resolved.

“Why is there so much conflict in the world?” asked Mukawa. “I realize that it is because people are accepting the ideas of Nabal.”

When people take advantage of wealth, education and power, the result is conflict—in families, among countries, and even in the church. We need to be careful of this attitude, said Mukawa.

“We need men and women who will adopt the attitude of Abigail—to go toward the other,” said Mukawa. “What attitude will we take when we leave this place?”

Reconciliation is the work of God, said Mukawa, referring to 2 Corinthians 5:17-20. “In the moment when we were God’s enemies, God came toward us. God has reconciled us in Christ Jesus.”

Mukawa encouraged those that filled the large arena to confess Christ. “Only one name has been given by which we can be saved,” he said. “And that is Jesus. Are you in agreement with me?”

The crowd’s repeated applause indicated they were.

Why are we Mennonites and Anabaptists such a diverse group? asked Mukawa.  Because the first Anabaptists went into the world with this good news, and Mukawa is happy that his ancestors are among those who accepted Jesus Christ because of this witness.

God calls his disciples to proclaim the cross and to work for the resolution of conflict. Citing current examples from around the world, Mukawa called for a resolution to ethnic, tribal and racial conflict. “I need you to know that within races is a great diversity that is a gift of God that we should be celebrating.”

The MWC Assembly represents the great diversity that we will enjoy in heaven when we stand before the Lamb of God, said Mukawa. “I am happy for that day.”

In closing, Mukawa returned to the day’s theme—walking with God in conflict and reconciliation. He encouraged his listeners to follow Abigail’s example and to walk toward reconciliation.

The Anabaptist commitment to peace and reconciliation was highlighted in the ecumenical greetings given earlier in the worship service by representatives from the World Council of Churches, Lutheran World Federation, and General Conference of Seventh Day Adventist. The audience affirmed with extended applause the appreciation expressed by Martin Junge of Lutheran World Federation for the reconciliation between Anabaptists and Lutherans in 2010.

Music during the evening service highlighted Africa. The singing was enthusiastic and energetic and included performances by two African choirs. While Brethren Choral Sounds Choir from Zimbabwe numbered about 40 singers, only five singers represented Eastleigh Fellowship Choir from Kenya; the other 25 were denied visas.

This was not the only group to experience the heartbreak of not being able to attend this global event. Worship leader Don McNiven led the audience in a moment of silent prayer for those who were missing the Assembly because their visas were denied.

Connie Faber is editor of Christian Leader. This article was written for Meetinghouse, a group of Mennonite publications.

Nzuzi Mukawa, a Congolese Mennonite Brethren pastor and educator, preached on walking with conflict and reconciliation. He highlighted the biblical character Abigail as an example of faithful peacemaking. (Photo by Dale D. Gehman)

Only five singers represented Eastleigh Fellowship Choir from Kenya; the other 25 were denied visas. (Photo by Dale D. Gehman)

The music ensemble led attendees in spirited singing, with a focus on songs from Africa. (Photo by Dale D. Gehman)