A most excellent Christmas 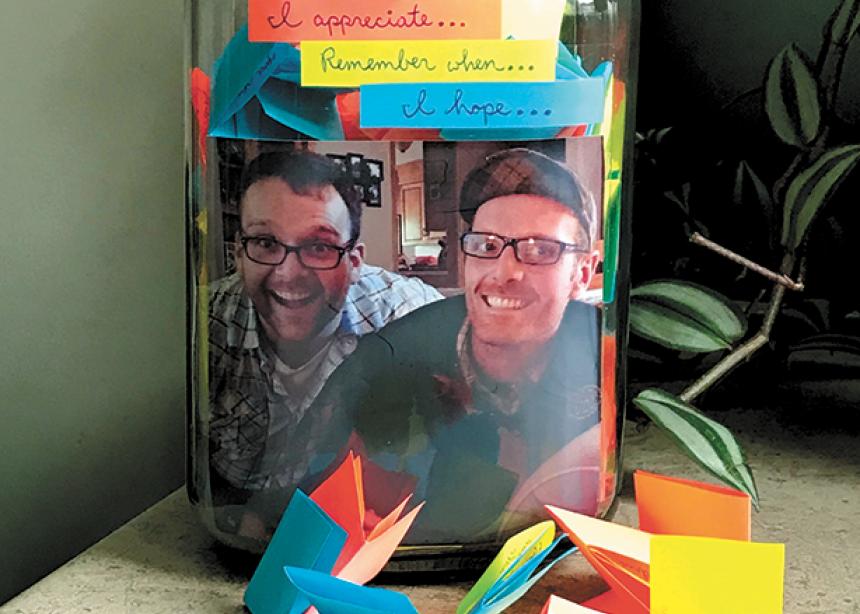 Remembering a Christmas homemade gift exchange: ‘I presented my brother Thomas with a jar filled with 150 encouraging notes.’ (Photo by Aaron Epp)

I love Christmas. The tree, the lights, the music, the food, gathering with family and friends, special church services. I look forward to all of it.

I still go with my siblings to the mall so that we can have our picture taken with Santa, and I’ve even dressed up as the jolly old elf a time or two (or three) myself.

Another thing I enjoy about Christmas is the presents. I get a kick out of choosing just the right gifts for loved ones, and I enjoy receiving gifts, too.

That said, like many other people, I’m not completely comfortable with the consumerism of Christmas.

According to Statistics Canada, the value of toys, games and hobby supplies, including electronic games, purchased at large retailers in Canada in December 2016 was $417.8 million. The value of televisions and audio and video equipment purchased was $459.9 million, and the value of food and beverages purchased was $5.1 billion.

Last year, many Canadians responding to a CIBC survey believed their holiday spending was out of control, with more than half saying they would spend more than they budgeted.

According to a CBC report, survey respondents complained about the craziness of holiday shopping, the time crunch and feeling pressure to give gifts.

“People are spending more over the holidays than they have in the past and they’re telling us they can’t really afford it,” David Nicholson, vice-president of CIBC Imperial Service, told the CBC.

Coming from a people who have traditionally prided themselves on doing “more with less”—and whose confession of faith states that God “calls us as the church to live as faithful stewards of all that God has entrusted to us”—I wonder what to do with these reports of overconsumption.

As I ponder the statistics, I think about my family’s gift exchange last year. Typically, I, along with my parents, brothers and our partners, pick names and buy a gift for one person in the family. Last year, instead of deciding on a spending limit we would each adhere to and then hitting the malls, we chose to make a gift for the person whose name we picked.

My father, a life-long music fanatic, made my wife Mandy, a film scholar, a mix CD comprised of famous theme songs from cinematic history. Mandy knit my brother Daniel a pair of mittens.

Daniel gave me a pillow inspired by my all-time favourite movie, Ghostbusters, that he sewed himself.

I presented my brother Thomas, who was going through a rough patch at the time, with a jar filled with 150 notes I had written to him. They included 50 memories of good times we’d shared, 50 things I appreciated about him and 50 things that I hoped for his future. The idea was that he could pick a note or two out of the jar each day, read it and be encouraged.

Thomas, a cribbage enthusiast, cut, drilled, sanded and stained a cribbage board for my father.

My mother gave my sister-in-law, Anna-Marie, a dish from a local pottery shop that she had decorated herself.

Anna-Marie presented my mother with a framed picture she had cross-stitched bearing the words “Most excellent,” a phrase my mother is famous in our family for using when she approves of something.

My family has always had a lot of fun opening gifts at Christmas, but we were especially ecstatic as we gave our handmade gifts to one another that morning.

Making gifts for one another caused us to be more thoughtful in our gift-giving than we might otherwise have been. Significant time was spent on the gifts and, in some cases, people stepped outside of their comfort zone while creating them.

My mother, for example, doesn’t consider herself artistic and had never painted a plate before. The pillow Daniel gave me, meanwhile, was his first-ever sewing project.

I’m sure that, for some people, making gifts at Christmas time would only contribute to the time crunch and pressure they feel during the holidays. Buying something in a store is easier, and I’m not knocking it. I was still happy to receive my share of books, CDs, movies and gift certificates last year.

At the same time, my family’s experiment with a homemade gift exchange was a reminder that I don’t have to spend more than I can afford.

It also reminded me that stepping out of my comfort zone to make something with my own two hands can result in a pretty great gift. 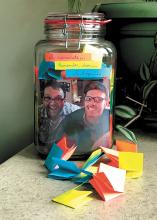 Remembering a Christmas homemade gift exchange: ‘I presented my brother Thomas with a jar filled with 150 encouraging notes.’ (Photo by Aaron Epp) 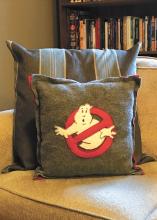 ‘My brother gave me a pillow inspired by my favourite movie, Ghostbusters, that he sewed himself.’ (Photo by Aaron Epp) 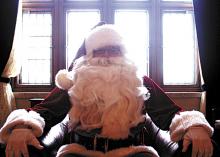 The author, dressed as Santa Claus in 2006. (Photo by Timothy Dyck)