‘More significant than my age’ 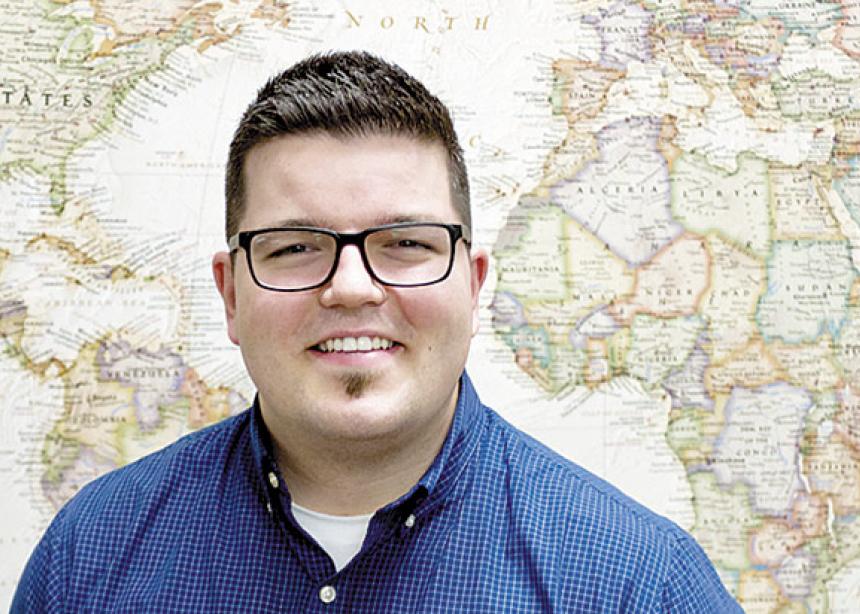 “I’ve been told multiple times, ‘Be yourself in this role,’ so that’s what I’m trying to do,” he said via Skype from his office in Calgary last month, three weeks after starting the job. “I’m bringing my skills and abilities to the table to help MCC grow into the future, in Alberta and beyond.”

Coldwell replaced Abe Janzen as executive director on Dec. 1, 2017. Prior to that, he spent two years working as the peace programs coordinator at MCC Alberta.

Originally from the Annapolis Valley in Nova Scotia, where he grew up attending Congregational Christian and Baptist churches, Coldwell learned about Mennonites from Sam Reimer, one of his sociology professors at Crandall University in Moncton, N.B.

Reimer was one of Coldwell’s main professors and his thesis advisor, and the two spoke frequently about sociology, social justice and faith. Reimer led a regular small group for students at the university called Living Justly or Just Living that helped frame Coldwell’s Anabaptist faith understanding.

When Coldwell moved to Ottawa in 2013 for graduate studies, he started attending a Mennonite church. Reimer encouraged him to go to the annual MCC Ottawa Office Student Seminar, so he did.

There, he met Megan Enns, MCC Alberta’s peace programs coordinator at the time. Enns told him about Uprooted, an MCC Alberta learning tour to Mexico for students. Because his graduate research focussed on Mexico, he went on the tour in 2014. He returned the following year as a leader on the tour.

Just as Coldwell was finishing his master of arts degree in globalization and international development, Enns left the position at MCC. He applied for the job and got it.

The role involved coordinating local and international service and learning programs for youth and young adults, and inter-provincial work with MCC’s advocacy network. Coldwell was also involved in community engagement, speaking in churches and schools, and supporting fundraising activities in Alberta.

The son of a carpenter father and homemaker mother, Coldwell grew up with his three siblings on a hobby farm in Victoria Vale, N.S., near the Bay of Fundy. His parents instilled in him a strong work ethic and placed great importance on getting an education.

His passion for social justice was sparked during a two-week trip to Kenya with Canadian Baptist Ministries shortly after he graduated from high school. “It started to open the door to me that I’m part of a bigger world and that the things I do here in Canada have some sort of ripple effect elsewhere,” he said.

Coldwell has gravitated toward leadership roles throughout his life, spending seven summers working at a Bible camp, and serving as a resident assistant at Crandall.

He hopes that his relatively young age will help guide MCC into the future, especially when inviting younger generations to become involved with the work it does.

“Kindness, listening, being part of the community and being thoughtful about this work all go a long way,” he said, adding that he has the ability to work collaboratively with MCC staff, its board of directors and its supporters, to further the work of MCC. “I hope that’s more significant than my age.”

Coldwell and his wife Jen have lived in Calgary for more than two years. He attends Foothills Mennonite Church.

He noted that MCC will celebrate its centennial in 2020. He thinks about how it will enter into the next 100 years. “My broader goal is to help MCC go into the future in a way that is inviting, thoughtful and welcoming to people,” he said. “We want to be thoughtful in the way we do our work and the way we adapt into the contexts we’re moving toward.”

Part of what will help MCC do that, he added, is keeping an eye on what’s worked well over the last 100 years.

He recalled a visit last July to a school in Uganda that MCC partners with. The school’s headmistress, Sister Sophia, told Coldwell that what she likes about Mennonites is that they are all over the world serving others because of their heart for God and their heart for humanity.

“It was just a nice reminder—an encouragement from Sister Sophia in Uganda—to continue to be true to why this thing called MCC began, which is to love God and to love our local and international neighbours,” Coldwell said. “For me, that’s what this is about. This is about the greatest commandment.” 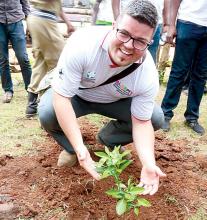 Thomas Coldwell, pictured in Kampala, Uganda, this past July, learned about the Anabaptist faith as an undergraduate. (Photo by Leah Ettarh) 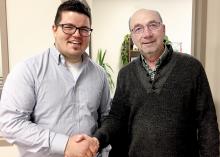 ‘We want to be thoughtful in the way we do our work,’ says Thomas Coldwell, pictured talking with Cecile Sanou. Sanou volunteered with an MCC partner in Soroti, Uganda, during 2016-17. (Photo by Leah Ettarh)