More-with-Less cookbook gets a new look 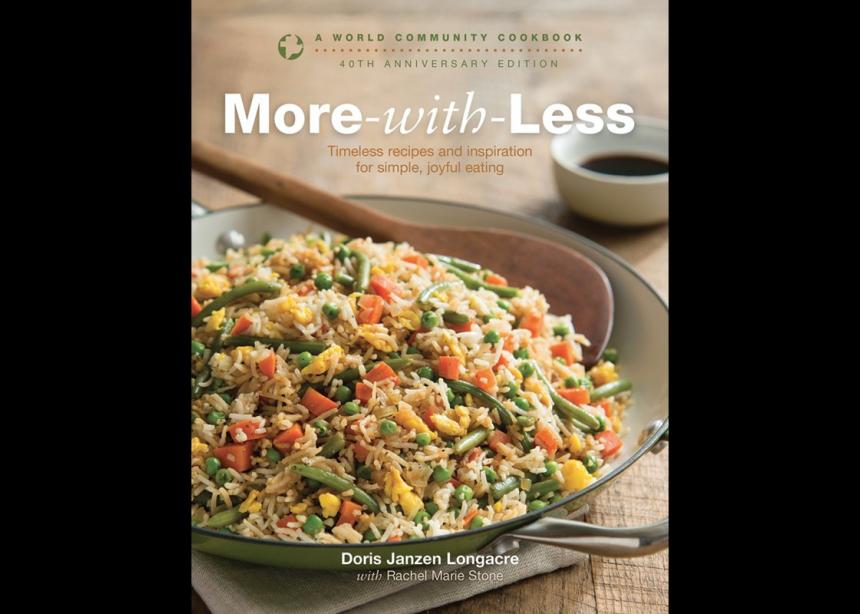 The 40th-anniversary edition of the More-with-Less cookbook, with its many full-page photographs, has an updated and more sophisticated look. Rather than simple black-and-white pages, it has moved to a full-colour format, designed to appeal to the eye. Although most of the recipes are the same, the layout has been reorganized, and the tips for eating in a healthy and eco-friendly way have been shortened and streamlined. I wonder how much our homes and churches have also moved from basic and practical to more decorative in the last 40 years.

Flipping through this new edition, one of the first things you notice is that the contributors are no longer listed on the recipe pages, and the little anecdotes and suggestions that are sprinkled throughout the original 1976 version and the 25th-anniversary edition are no longer there. The contributors have been put into a list and moved to the back of the book. This makes sense if the new cookbook is designed to appeal to those outside traditional Mennonite communities. Back in the 1970s, cooks would have recognized some of the names, perhaps even those from abroad, such as Viola Dorsch of Tanzania (soda cracker recipe), or Herta Janzen of India (Indian dessert yogurt).

The order of the chapters has also changed. Rather than beginning with yeast breads, the new version has bread recipes toward the back, just before desserts. Meanwhile, salads and soups were moved up to the second and third spots, right after snacks and starters. Perhaps these changes reflect that homemade breads and muffins have moved from everyday to occasional fare, while hummus and other dips have moved in the other direction.

I found it interesting that all recipes calling for shortening or margarine have been revised, asking for butter instead. It’s amazing how things change. In the 1980s and ’90s, butter was regarded as dangerous, but today it is margarine and shortening that are in disfavour. Another change is that, rather than deep-fried french fries, the recipe calls for the potato strips to be roasted in a bit of oil.

It’s also interesting that recipes calling for flavoured gelatin have been scrapped. I wonder if this is because jellied salads have fallen out of favour, or to avoid pre-packaged ingredients. Other recipes that no longer appear are some of the many soybean dishes, instructions for a large-scale master baking mix, and homemade soap.

Several of the new recipes are vegetarian, including lentil burgers, baked tofu, hummus and falafel. A few names for things have been changed. Modern cooks might not know where to access dry-curd cottage cheese, so the revised recipe calls for farmer cheese or queso blanco. I was interested to learn that another name for ground wheat is bulgur.

A few of the recipe titles have been changed. For example, poor man’s soup was changed to beef and bean soup, and Grandmother’s Russian pancakes to Russian crepes. Meanwhile, baked fish has been labelled baked fish béchamel. I was glad to see that the folksy title “Martin stew” remained, along with the explanation of how it got that name.

The More-with-Less cookbook remains a classic, with healthy recipes that call for basic ingredients. It is a trusted go-to book for everyday fare that can be made economically with world justice in mind. The improvement I appreciate most in this new edition is that chapter headings are printed on each page so that I can quickly find recipes without using the index.

My original More-with-Less cookbook is extremely worn and spattered because I have used it so often. Hopefully, a new generation will find the 40th-anniversary version equally appealing and useful.

One of my most beloved cookbooks is "More-with-Less," and I have all the follow-ups too (including the 25th anniversary). I won't bore you with why I landed on this page, where I read that the anecdotes and suggestions from the original cookbook were removed for its 40th anniversary edition (which I haven't seen). I don't know who any of the people were who put their recipes and advice in the cookbook, but I treasure their voices, their simply being there with the food and the stories and the love. I wonder how many comments the publisher received saying, with sadness, that they probably erred in doing this? Ah well, I hope it was a good seller and raised some funds.

"More-with-Less" connected people to food and food to people using recipes. Editing out the comments... sorry to hear that. It was a charm of the book that was based in our valuing all voices for the contribution they made.