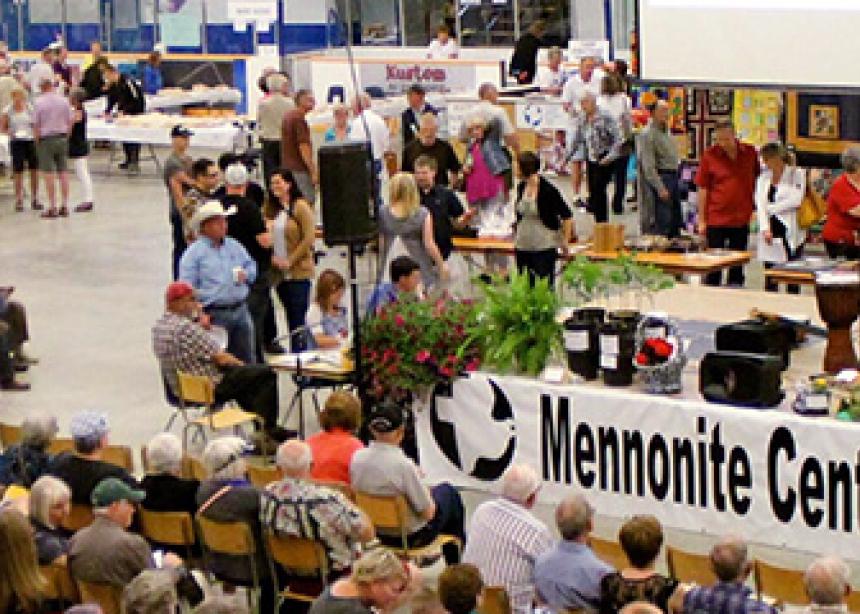 The auction began. Among the crowds in Coaldale for the annual Mennonite Central Committee (MCC) Alberta Relief Sale on June 10 and 11, stood two Syrian men whose families had recently been assisted by MCC and sponsored by Mennonite churches to resettle in Canada. To their surprise, a loaf of bread was auctioned off for $200!

A sapling oak tree was next to go. The price climbed and climbed. Enthusiasm filled the room. As the two Syrian men watched the bids rise, they began laughing and hugging each other. Now they were beginning to understand some of the unique ways MCC gathers funds so people like them have been able to receive vital support during difficult times. This small tree sold for $2,500. And so did the next one.

Three more trees sold, each bringing in between $2,200 and $2,500. All of these trees were grown from acorns that fell from the giant old oak tree in the Chortitza area of Ukraine, that is famous in Mennonite historical memory.

Rowis, a participant from Egypt in the International Volunteer Exchange Program, ran for an hour and 45 minutes on a treadmill, while calling out to passersby, “You donate! I’ll run for you!” The donation basket was full after his run was complete.

As part of the My Coins Count effort, young children pulled a small wagon with a yellow cardboard school bus mounted on top. As they journeyed through the venue with lights flashing on the bus, people dropped coins into the wagon to support Edupaz, an education project in Colombia. My Coins Count raised more than $23,000.

Some favourite Mennonite dishes were enjoyed by long lines of hungry people, with all food prepared and served by volunteers.

Many beautiful quilts were auctioned off, in all shapes, sizes and colours.

The effort and energy that goes into a relief sale is huge. The dividends are huge, too. More than $218,000 was raised to support MCC’s ongoing international ministries. In the end, volunteers and those who attend support a cause that reaches beyond their own families, countries and faith groups, as Christ’s followers working for God’s kingdom.