Format and versatility appeal to users across cultures and Christian traditions 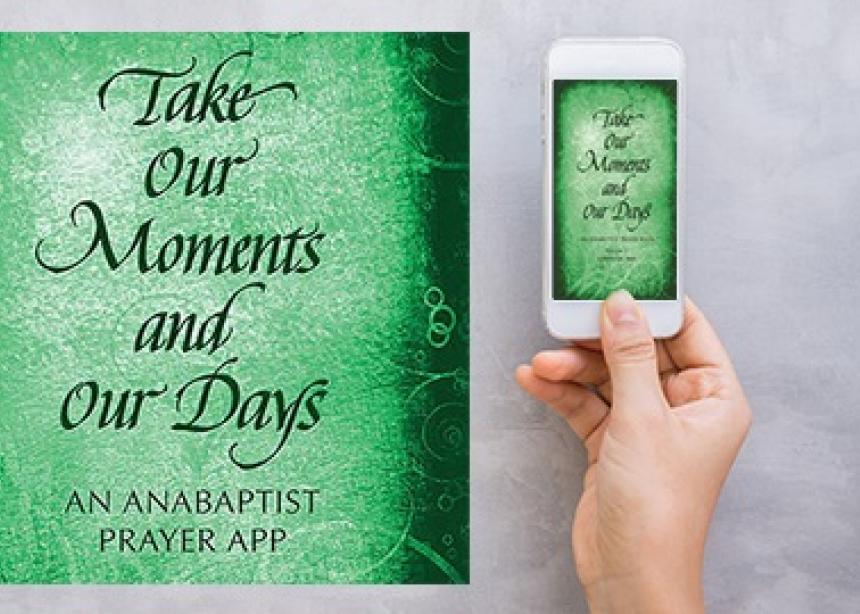 The Anabaptist prayer book, Take Our Moments and Our Days, is now available as a mobile app.

Users in 15 countries across six continents have downloaded a new free mobile app version of Take Our Moments and Our Days: An Anabaptist Prayer Book in the four weeks since its launch on Oct. 23, 2017.

The app contains the entire text of both print volumes of the prayer book—Ordinary Time and Advent through Pentecost—which were published in 2007 and 2010 by Herald Press in collaboration with the Institute of Mennonite Studies (IMS), the research agency of Anabaptist Mennonite Biblical Seminary (AMBS) in Elkhart, Indiana.

“In its new electronic guise, Take Our Moments is a resource for people on the go and for ad hoc groups,” said Eleanor Kreider, an author and former long-term mission worker in the United Kingdom who was part of the editorial group that developed the prayer books at AMBS over a period of seven years. “Being able to offer the content via a free app also removes barriers of cost and shipping.”

Appeal of daily prayers
Kreider noted that the morning and evening prayer services have appealed to users across various cultures, languages and Christian traditions. The Anabaptist “flavor” of the services is conveyed through the predominance of Jesus’ voice, space for communal reflection on Scripture, and the choices of Bible readings.

She recalled a time when she and her late husband, Alan Kreider, were asked to lead morning prayers for an ecumenical workshop and chose to use the prayer book.

“We were astonished at the universal delight in Take Our Moments,” she said. “The Anglicans recognized the overall structure of the Daily Office, the Baptists liked the emphasis on biblical words, the Pentecostals felt at home with the free prayers and the Mennonites loved to pray through the songs.”

The Ordinary Time volume, which contains a four-week cycle of prayers based on the Lord’s Prayer, the Beatitudes, Jesus’ parables and Jesus’ miracles, has been published in French and Korean. Kreider is aware of German, Spanish, Lithuanian and Japanese Christians who are using the services, too.

She said she has heard many reports of both individual and corporate uses of the prayer services, from committee meeting devotions, morning worship for small congregations and pastoral prayers to personal and small-group prayer times.

“A married couple who had never prayed together because of differing pieties found they could now do so, using the prayer book, because it provided both prescribed biblical wordings and places for free prayers,” she said.

She added that families who have never held devotions have told her that the prayer book has enabled them to enjoy reading Scripture and praying together, with school-age children helping lead and younger ones offering their own prayers of thanks and petitions.

“Also, young people who are embarrassed to pray aloud in free fashion have responded positively to the format,” she said. “Several voices can lead, and the petitions can be filled in with simple words or silence.”

App features
IMS managing editor Barb Nelson Gingerich, who oversaw development of the app, said that users of the print volumes had been asking for a digital version. Gifts from several donors, including the Anabaptist Foundation in Vancouver, B.C. made it possible for IMS to contract with James Stuckey Weber to design it. It’s available for both Apple and Android devices.

The app’s settings enable users to select which version of a doxology, a scriptural canticle and the Lord’s Prayer they wish to use, Gingerich said. Both the books and the app identify songs of praise and response to the readings in each service. (The books include musical settings composed by James Clemens of repeated parts of the services.) Introductory materials and indexes are also included.

Gingerich said she finds it easy to use the app in orienting newcomers to the prayer practice. For more than a decade, she and her husband, James Nelson Gingerich, have hosted weekday morning prayer services in their Goshen, Ind., home using the prayer book.

“Usually we're helping newcomers find their way with ribbons, flipping pages, etc., all the way through, but the app is user friendly and easy to navigate,” she said. “Everything you need is in one place.”

Currently the app is only available in English, she noted.

“Right now, the app is pretty basic,” Gingerich said. “When it is used more widely, we’d like to get a sense of what people would value in terms of enhancements.”

Ron Ringenberg, AMBS vice president and CFO, is a prayer book user who said he was “a big proponent” of the digital version. He’s excited about the portability and accessibility of the app and said he plans to use it with his small group and also when traveling.

“The idea of making use of the intelligence of the smartphone for this purpose makes a whole lot of sense,” he said. “I’m thankful that there are individuals who thought it worthy to fund the development of the app.”

Marty Troyer, pastor of Houston Mennonite Church: The Church of the Sermon on the Mount, is another prayer book user who has welcomed the app version.

“Over the years the Anabaptist Prayer Book has shaped how I see myself as a Christ-follower, energized my public witness as a peacemaker and aligned me over and again with the God of love and shalom justice,” he said. “What is my identity in Christ? Who and how is God in the world? And how can I use my best gifts to join God in spreading that beautiful good news? The Anabaptist Prayer Book eases us from the stuck pattern of prayer as list to prayer as becoming.”

Suggestions for enhancements to “Take Our Moments and Our Days: An Anabaptist Prayer App” can be sent to Institute of Mennonite Studies (ims@ambs.edu). To learn more, see www.ambs.edu/prayerbook.

The Anabaptist prayer book, Take Our Moments and Our Days, is now available as a mobile app. 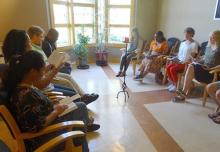 Members of the AMBS community gather in the Chapel of the Word for weekly prayers with Take Our Moments and Our Days, an Anabaptist prayer book published by Herald Press in collaboration with the Institute of Mennonite Studies. (Photo by Annette Brill Bergstresser) 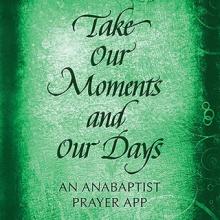 The Anabaptist prayer book, Take Our Moments and Our Days, published by Herald Press.