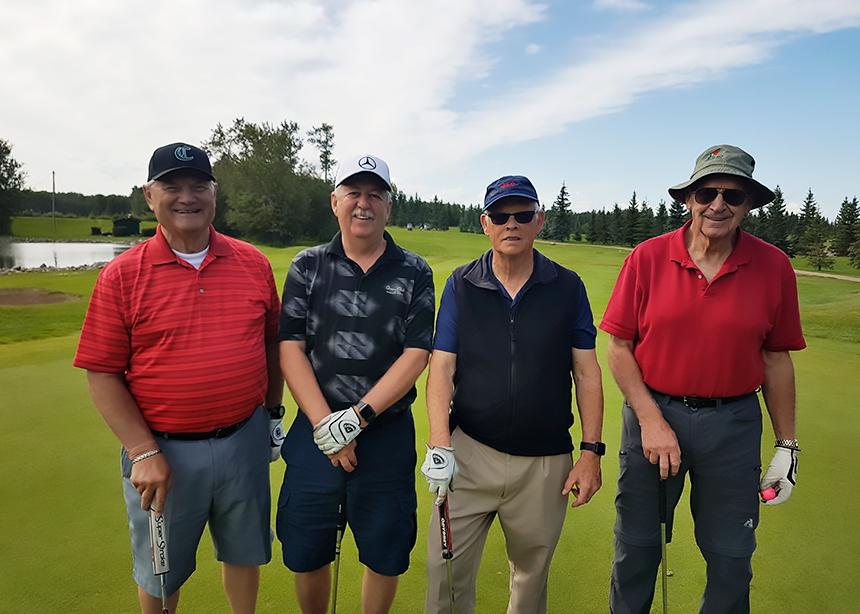 Pictured from left to right: Rudy Koop; Garth Wideman and Dave Lefever, both of Holyrood Mennonite, Edmonton; and Herman Neufeld of Edmonton First Mennonite, formed a team to raise money for the Edmonton Mennonite Guest Home at the first-ever MMI golf tournament in September. (Photo by Marguerite Jack)

Mennonite Mutual Insurance (MMI) in Alberta had its first-ever golf tournament fundraiser at the Eagle Rock Golf Course in Leduc County, just south of Edmonton, on Sept. 7. Chosen as its beneficiary was the Edmonton Mennonite Guest Home that provides short-term residential accommodation for patients and families of patients being treated in Edmonton’s medical facilities.

The Guest Home group, which has two properties in south Edmonton, is a wholly owned non-profit subsidiary of the Church of God in Christ, Mennonite (Holdeman), which has guest homes around the world. In Canada, it also has guest homes in London, Ont., and Halifax.

Marguerite Jack, MMI’s constituency relations representative and a member of Calgary First Mennonite Church, initially didn’t know much about the Church of God in Christ, Mennonite, but she was soon impressed with what it was doing and wanted to help. Hence, the golf tournament.

The Guest Home group purchased both houses in 2000, and they have been going strong ever since. According to Isaac Curtis, a Church of God volunteer, on average the houses are 90 percent full, serving about 200 guests a month, evenly split between patients and their family members.

This non-profit initiative is funded by church members, but fundraising was needed when one house on 117 Street, across from the Cross Cancer Institute, needed to be rebuilt.

When the Guest Home group first bought the homes, it approached the City of Edmonton, which supported the project since there was a big need at the time for affordable accommodation for medical patients and their families. Nothing was put in writing, though, and 16 years later a neighbour complained. The Guest Home group applied for rezoning of the property and its proposal was accepted, but a number of upgrades were required.

The group determined, though, that it was more cost-effective to rebuild the house, and, although church members were a little nostalgic and worried about the new building feeling like an institution instead of a home, they agreed to move forward. The layout offers eight guest rooms, each with its own bathroom. An elevator will make the new house more wheelchair accessible, and the new kitchen will meet all Alberta health standards.

The golf tournament, which included many Mennonites, raised $10,000 for the Edmonton Mennonite Guest Home. 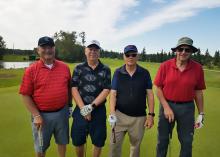 Pictured from left to right: Rudy Koop; Garth Wideman and Dave Lefever, both of Holyrood Mennonite, Edmonton; and Herman Neufeld of Edmonton First Mennonite, formed a team to raise money for the Edmonton Mennonite Guest Home at the first-ever MMI golf tournament in September. (Photo by Marguerite Jack) 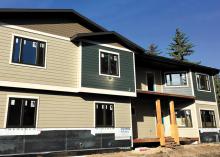 The Edmonton Mennonite Guest Home, a non-profit subsidiary of the Church of God in Christ, Mennonite, is rebuilding one of its two houses in south Edmonton. Completion is expected to be in the spring 2020. (Photo by Brian Ladd)