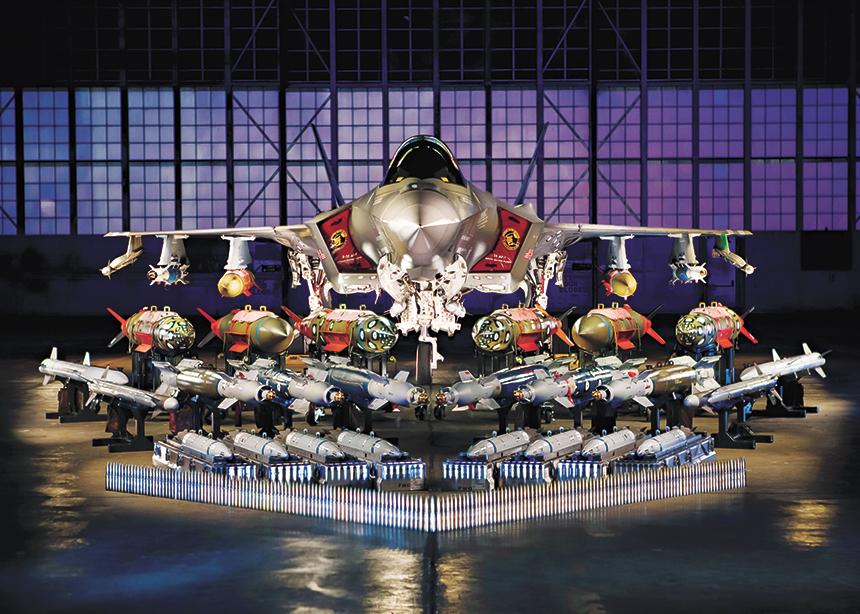 From Dirk Willems loving his enemy in 1569 to Colombian Mennonites building peace today, Anabaptists have offered a bold peace witness. But being a peace church is complicated.

Anabaptists got violent in Münster in the 1500s, they mounted armed self-defence units (Selbstschutz) in Ukraine in the early 1900s, many enlisted in World War II and some Mennonites are signing up to fight in Myanmar today. Our track record is mixed.

Today, in Canada, more and more of our tax dollars are spent on weapons. Mennonite response to our government’s recent lethal spending spree—$19 billion on fighter jets and $406-million on a missile defense system for Ukraine—has been pallid. Among the social media accounts of numerous Mennonite and ecumenical organizations and leaders we searched, we found but one tweet about the announced purchase of F-35 jets in January (from the Mennonite Central Committee (MCC) Canada Peace and Justice Office).

So we asked for comment. How should we, as people of peace, respond to the purchase of F-35s and the missile system?

Encouragement
We continue to encourage the Canadian government to invest more money in supporting peacebuilding and address the root causes of conflict, rather than increase military spending. Through our work, we see the vital and lifegiving examples of conflict prevention, community mediation . . . spaces of alternative justice that all contribute to a more peaceful world.
—Anna Vogt, co-director, MCC Canada’s Peace and Justice Office

Spending
I object to us spending billions of dollars on fighter jets when we have a housing crisis in Canada. . . . We have a health crisis, we have an education crisis. . . . [And] what is our responsibility outside our own country with creating equity?
—Geraldine Balzer, moderator, Mennonite Church Canada

Jesus
First, we need to be vocal about the injustice of prioritizing national defense over the much greater and more present needs of so many people, both within Canada and around the world.

Second, we need to seek out ways to back up our vocal resistance with active demonstrations of a different way of being.

What is the government hoping that these fighter jets will accomplish? What does financial support of Ukraine’s struggle against Russian invasion hope to change? And how might we, as Christians, accomplish similar goals, but in ways that embody the teaching of Jesus?
—Jesse Nickel, professor, Columbia Bible College

Killing
I think people who are committed to peace need to rise up, protest and do their best to stop this mass spending [on] war. The F-35s are an assault weapon. Their main goal is to get away with killing people in other countries.

But we also need to look at how they kill Canadians. Why is the government choosing to spend billions of dollars on an assault plane when our healthcare system is literally crumbling? Our education system is crumbling and record numbers of people across Canada are using foodbanks.”
—Rachelle Friesen, Canada coordinator, Community Peacemaker Teams

Rationality
I suspect numerous Mennonites think fighter jets and a missile system for Ukraine are grossly expensive yet rational investments, particularly as the spectre of an irrational Putin looms large. There is also a sense of attachment to communities where Mennonites once lived in Ukraine now experiencing war. This will influence some to look at military purchases more favourably.

The question you pose, however, suggests some Mennonites feel a nagging sense that our pacifist beliefs might have something to ask of us. We can begin by asking: Why does it seem like war is so rational, and even the right thing to do in Ukraine? Why might we not be questioning Canada’s military build-up?

I’d like to draw our attention to three powerful ideas that shape how we think about these things. First, in public commentary and everyday conversations, the war in Ukraine is often discussed in terms of being a war against an irrational leader. The threat of a megalomaniac Vladimir Putin is often invoked.

When we justify Canada’s support for war by focusing on a single, irrational leader, we follow a long-standing practice—also common in Europe’s colonial wars—that anyone who stands against our way of seeing things is irrational. This keeps our attention on someone—whom we think we know, but don’t actually—and their supposed psychological state, rather than looking at deeper causes of the war and its full costs on human life, the environment, etc.

A second common framing, which occurs in relation to war more generally today, is that war is necessary to provide humanitarian support. So-called “humanitarian war” offers a new take on just war.

In these cases, war is considered undesirable but necessary to achieve a greater good. Here our thinking is narrowed, and we forget there might be other ways to achieve good outcomes.

Finally, I think Mennonites in Canada might also have lingering ideas that Canada is a benign state and its military is primarily used for peacekeeping. When I returned to Canada in 2012 after living in the U.S. for numerous years I was quite surprised to find that students in my peace and conflict studies class were unfamiliar with the term counter-insurgency and unaware that Canada was engaged in counter-insurgency efforts in Afghanistan. I looked further into media coverage and found the framing suggested Canada was engaged in peacekeeping, which was clearly not the case.

Peacekeeping perceptions may mean Mennonites have not grappled with the idea that Canada’s military might fight messy, terrible wars with problems and costs far beyond the financial numbers.
—Reina Neufeldt, peace and conflict studies professor, Conrad Grebel University College

Enemies
Our starting point in this conversation should be the words of Jesus, who calls us to “Love your enemies and pray for those who persecute you. . . .” Fighter jets and missiles do not show love to the enemy, nor do they provide real, long-term security.

We respond by putting on the “full armor of God” (Ephesians 6), recognizing that the human struggle we see is driven by powers of darkness and spiritual forces of evil. We respond by praying with the understanding that the battle is spiritual and must be fought in God’s strength.

We can respond in practical ways with humanitarian and spiritual aid as many agencies, including those from our Mennonite churches, are doing in Ukraine. We can respond by appealing to our political leaders, reminding them that planes and missiles destroy lives, infrastructure and the environment, that spending billions preparing for war could be better spent on diplomacy, health care, peace education, green energy, reconciliation, infrastructure and other life-giving projects.

We can protest and join peace groups and alliances such as the No Fighter Jets campaign, Conscience Canada and World Beyond War.

From a human perspective it might appear to make sense to defend ourselves with fighter jets and defend the Ukrainian people with a missile system, but as people of peace who take their cues from the One who has initiated a different Kingdom we are called to respond differently to the dominant narrative.

We need to recognize we are not in Ukraine, and thus our objection to missiles for their army may sound callous and indifferent. But we also know that violence tends to create more violence. Loving our enemies means we sympathize not only with Ukrainian parents, spouses and children who lose loved ones but equally with Russians who suffer loss.

We respond rooted in the understanding that all peoples are created in God’s image, that God loves all of his creation and that life is sacred.

Will our responses and actions stop fighter jet purchases or keep missiles out of Ukraine? Not likely. But with prayer, persistence, truth telling and concrete actions, attitudes supporting dominant war narratives can shift and future wars may be prevented. So too can the dominant war narrative change if civil society demands it in large numbers. With God’s help this can be accomplished. God wants his kingdom and his will to be done on earth. He continues to look to his church, his people of peace, to show the world what this looks like.
—Ernie Wiens, retired farmer and war tax resister, La Salle, Man.

In the face of societal pressure to see militarism as the only possible response to the actions of “enemies,” Conscience Canada has provided a place for some of us to know that nonviolence is a power we can learn to access.

In a world where conscience can seem like a notion whose time is past, we know its power, and we intend to keep tapping into it.

While we decided to close the Peace Tax Trust Fund [which provided a mechanism for people to redirect the portion of their federal income tax dedicated to miliary expenditures], conscientious objectors are finding various ways to redirect the military portion of their taxes, including keeping their income below taxable levels and/or making donations to peace organizations.

Let your MP and other politicians know there are better ways than war and militarism by using our online Peace Tax Return, available on our website: conscience canada.ca. [This return does not include a financial component.]
—Jan Slakov, Conscience Canada

This article appears in the Jan. 30, 2023 print issue, with the headline “Conscientious.” 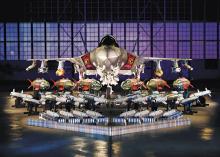 Mennonites need reasonable security, too. Policing, national defense, peacekeeping, etc. As we acknowledge and support appropriate amounts and uses of force and deterrence, we'll be heard on excesses, abuses and bad policies. If we only talk ideally, likely not.

Dreams of better solutions to danger and violence issues are great, but they need legs. Mennonite churches don't provide them. Peaceful living and helping others are great, but we must add a balanced approach to safety and stability.

My interpretation of scripture is that Jesus compromised his own ideals by allowing his disciples to carry swords and advising them to have a few at one point. Only as a small show of deterrence, I think, but it demonstrated compromise. Society and the world would fall apart without many forms of security, unfortunately. I think Jesus fully understands this.

Inwardly, we can be pure. Outwardly, we just do what we can, living by many compromises. Far more money and effort could go towards alternative approaches to conflict, but without a credible, comprehensive position, advocates of this have little influence.

To promote what doesn't work and we ourselves can't much live in harder circumstances, does the opposite of promoting more peaceful methods. To imply that being peaceful means always being extreme, is unhelpful. We have to make sense and not be hypocritical.

Complete nonviolence rarely works with more serious crime, danger and violence. Progress lies in accepting this, helping with what does work and adjusting our theology. Mennonite Church Canada should promote thorough, thoughtful analysis and discussion of all this.