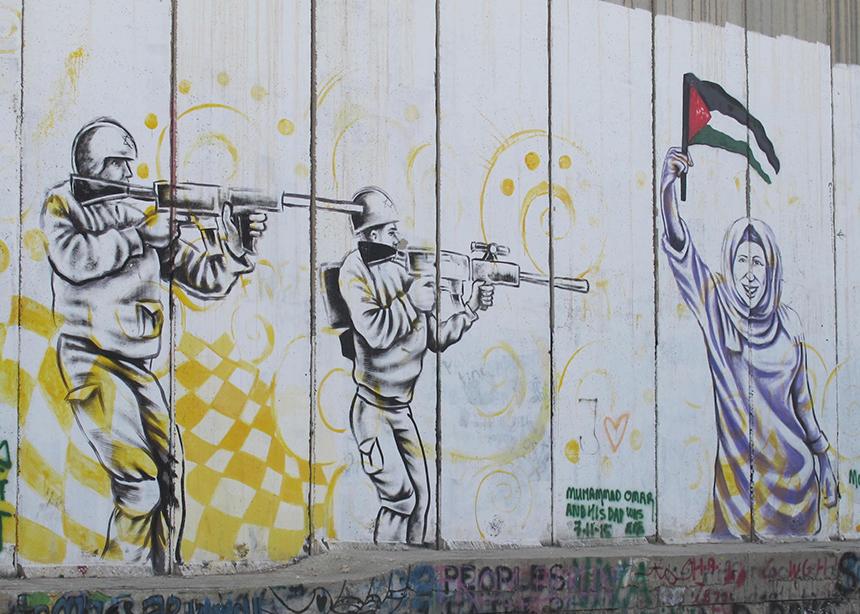 Christians in the land where Christianity started have asked sisters and brothers around the world for help. In response to these pleas from Palestinian churches—with whom Mennonites have long-standing relations—delegates at the 2016 Mennonite Church Canada assembly approved a resolution related to violence in the Middle East. What has happened since that resolution was passed?

With reorganization of MC Canada bodies in 2017, the former national working group re-formed into regional efforts. The most active ones are in Manitoba and MC Eastern Canada. Their activities have focussed on education of congregants, largely through speaking engagements.

In parallel, Mennonite Central Committee (MCC) has continued its efforts to promote a just peace in the Middle East. Its most recent effort is the Cry for Home campaign, which focusses on how international law relates to the wish of many Palestinians to have safe homes for their families. In many cases, the Mennonite church working groups function in tandem with MCC, organizing additional speaking engagements for guests brought in by MCC.

The 2016 resolution called for more than education. It “asked” MC Canada, regional churches, congregations and members to “avoid investing in or supporting companies that do business with Israeli settlements and the Israeli Defense Forces.” And it called for the federal government to “put pressure on Israel [including through economic sanctions] to end the occupation and work for a just peace, in accordance with international law.”

On the latter point, members of the working groups have met with numerous MPs, and Willard Metzger, MC Canada’s executive director, sent a letter to Prime Minister Justin Trudeau on Feb. 2, 2018, in the wake of President Donald Trump’s provocative decision to move the American embassy in Israel from Tel Aviv to Jerusalem. Metzger’s letter, approved by the Joint Council, expressed “appreciation” for Trudeau’s public confirmation that Canada’s embassy will remain in Tel Aviv.

“We recognize,” the letter reads, “that both peoples—Palestinians and Israeli Jews—yearn to live in a climate of peace and security without fear of violence.”

The letter encourages the government to “play a more proactive role in supporting a comprehensive peace agreement, and in speaking boldly and with clarity regarding actions that are counterproductive to this aim.”

Byron Rempel-Burkholder says there is often a gap between Ottawa’s forward-looking policies related to the Middle East and its actual willingness to push for peace and fairness. Rempel-Burkholder, who attends Home Street Mennonite Church in Winnipeg, has been a key person in MC Canada efforts related to the Middle East. He and his wife Melita spent three months at Bethlehem Bible College in 2016 through MC Canada.

The MC Manitoba working group has had numerous conversations with a Winnipeg MP, and the MC Eastern Canada working group sent a delegation to Ottawa to meet with MPs during the week of March 26.

With respect to the mention of investments contained in the 2016 resolution, Rempel-Burkholder says the working groups are focussing on education in advance of divestment work. While the four-session resource for congregations did speak about divestment, and mentioned Caterpillar and Hewlett Packard specifically, Rempel-Burkholder is not aware of any specific actions yet taken. He says the MC Manitoba and MC Eastern Canada working groups are compiling more complete lists of companies to avoid.

Metzger says MC Canada is focussing on calls for peace at this point rather than divestment.

Last summer, MC U.S.A. passed a resolution that goes further than the Canadian version with respect to divestment. As a follow-up, 19 representatives of MC U.S.A.-connected agencies working in Israel-Palestine met in Goshen, Ind., last November to discuss divestment of holdings in companies profiting from the Israeli occupation of Palestinian territories. Many of the organizations found their existing investment screens had already eliminated companies connected to the Israeli occupation. A follow-up consultation will be held this fall.

The MC U.S.A. resolution also includes a commitment to “opposing anti-Semitism and seeking right relationships with Jewish communities.” This is a new dimension of MC U.S.A.’s long-standing involvement in Israel-Palestine.

Mennonite involvement in one of the most entrenched conflicts of our time is, of course, contentious. Amidst that, Rempel-Burkholder points to the underlying relational and ecclesiological factor. For him, the bottom line is responding to sister and brothers in the Palestinian church with prayer and support. “We try to give voice to the Palestinian church,” he says.

For background, see “Action seeks solution for Israelis and Palestinians.” 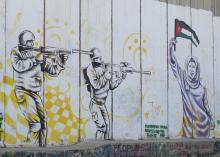