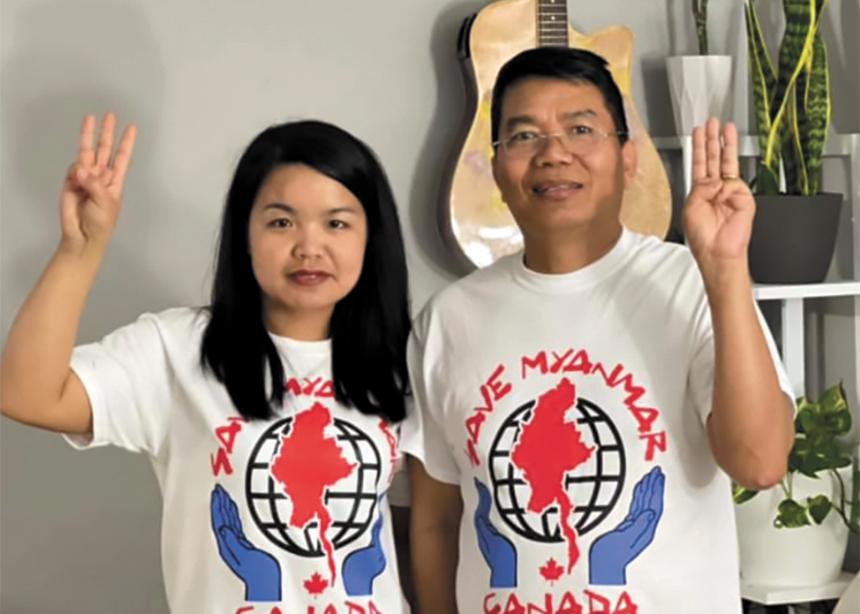 Jehu Lian, a Mennonite pastor, and his wife, Ma Bawi, show solidarity with the people suffering repression in Myanmar. The three-finger salute—adapted from the Hunger Games film—has become a common symbol of freedom, defiance and solidarity in Myanmar and among pro-democracy movements elsewhere in Southeast Asia. (Photo courtesy of Jehu Lian and Ma Bawi)

Amid mass protests, lethal military response and UN warnings of Myanmar becoming a “new Syria,” one Mennonite source in the country said, “We are in darkness, full of fear and with no hope for the future.”

Canadian Mennonite has agreed not to use the source’s name due to the threat to those who speak critically of the military.

A military coup on Feb. 1 sparked largely peaceful protests and general strikes. According to our source, and news reports, the military showed restraint at first but then began using live ammunition on peaceful protesters. More than 750 protesters have been killed by the military, including dozens of children.

Nearly 5,000 more have been detained, with reports of torture being used on some.

“The military torture the civilians, violently crack down on peaceful protesters, kill unarmed civilians every day, raid our houses, and cause chaos to people’s properties,” said the source via email from Myanmar.

The violence and fear come on top of the pandemic, which already had devastating financial impacts on many people’s livelihoods, with many work places shut down.

“We are struggling for our daily food to survive,” wrote our source, referring to the food crisis among hundreds of church families. “Our income generation is zero because of the impact of the pandemic and the political crisis.”

Referring to “ethnic armed groups,” the source said “at present, civil war is beginning,” a concern echoed by UN officials. Some states within the country have their own armies.

The level of alarm and concern is very high among the five Mennonite Church Canada congregations with close ties to Myanmar. Calgary Chin Church, Chin Christian Church in Kitchener, Ont., and Grace Christian Church in Ottawa are all made up largely of people who came to Canada as refugees from Myanmar. They worship primarily in the Chin language. Living Hope Christian Fellowship in Surrey, B.C., serves both Karen people—another language group from Myanmar—as well as other Canadians.

Jehu Lian is a pastor of Chin Christian Church in Kitchener. The situation of his parents and brother and sister in Myanmar, as well as many others in the country, weighs heavily on him. “I cannot eat properly,” he said by phone, describing his state of concern.

Lian has worked extensively in church planting in Myanmar, much of it through Myanmar Missions International (MMI), a partner agency of MC Canada. MMI has 86 churches and 169 missionaries in Myanmar. Lian serves as MMI’s assistant director.

He is hearing from his extensive contacts in Myanmar that people do not have money and are going hungry. “People cannot go to work,” he said. On top of the economic impacts of COVID-19, people now risk arrest if they go out.

Lian shared numerous videos and photos showing people who fled to the jungle, a child who was shot, military violence toward civilians and mass protests. He called the military’s activities “evil.” What is clear from the images and news reports is that the popular uprising is rooted in the general population, not just among activist groups.

Jeanette Hanson, director of International Witness for MC Canada, travelled to Myanmar in 2019 to join Lian, Norm Dyck of MC Eastern Canada and others at a ministry-training event. In a recent conversation with International Witness worker Tom Poovong in Thailand, Poovong told Hanson of the refugees crossing from Myanmar into Thailand, which is bracing for a possible wave of refugees.

Reflecting on the great joy and potential she witnessed in the opening of a new ministry-training centre in Myanmar in 2019, while people now must focus on the basics of food and safety, she said, “What does it mean to stand with global partners when you feel like your hands are tied?”

On April 15, MWC issued a pastoral letter to the church in Myanmar, acknowledging the suffering, and calling on God for mercy.

The source in Myanmar shared this message for Mennonites in Canada: “This is a special request for Canadian folks to pray for our country and particularly for the vulnerable families of our church. . . . We believe that prayer can make a difference. God bless you all.”

Due to instability in Myanmar there is not currently a way to provide financial support to our sisters and brothers there. MC Canada does invite online donations to MMI at mennonitechurch.ca/myanmar.

Related story:
MC Canada: ‘Pray for the people of Myanmar’ 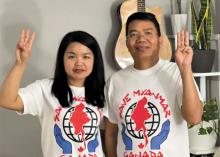 Jehu Lian, a Mennonite pastor, and his wife, Ma Bawi, show solidarity with the people suffering repression in Myanmar. The three-finger salute—adapted from the Hunger Games film—has become a common symbol of freedom, defiance and solidarity in Myanmar and among pro-democracy movements elsewhere in Southeast Asia. (Photo courtesy of Jehu Lian and Ma Bawi)