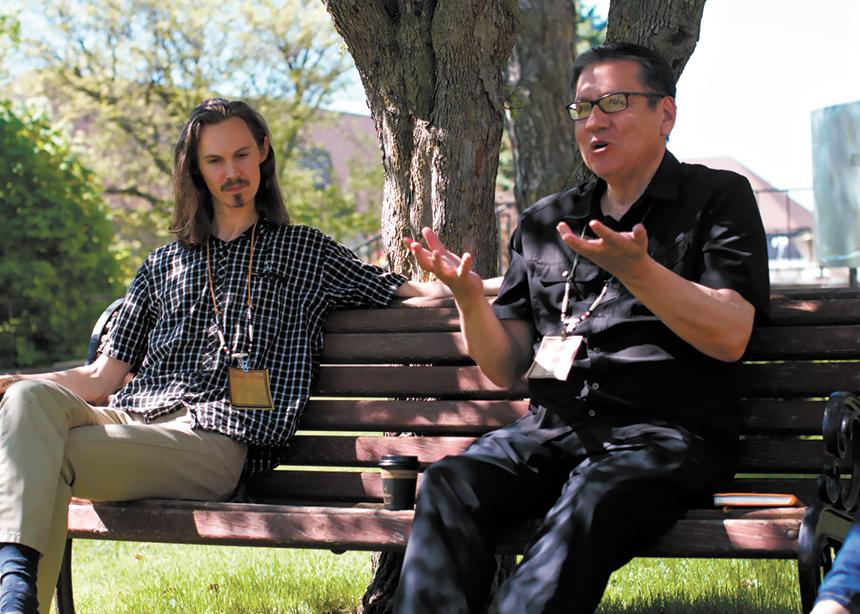 Under the bright blue sky, on the grassy hill of Tyndale University in Toronto, situated on the traditional lands of the Anishinaabe, Haudenosaunee and Huron-Wendat peoples, Casey Church performed an Anishinaabe pipe ceremony, acknowledging the Creator and the sacred directions. He gave thanks on behalf of the 200 or so people gathered in two large circles around him.

For a conference focused on Christian theology, the North American Institute for Indigenous Theological Studies (NAIITS) 2019 Symposium began in a way that may have seemed foreign to many of the attendees looking on, but, in truth, the pastors, academics and interested people of faith were witnessing something that had deep roots in the very land upon which they stood.

Land was, in fact, the core theme of this year’s symposium entitled, “Land and place: Indigenous perspectives in an era of displacement.” Plenary speakers covered a wide range of topics: from the land as a relational gift of the Creator and the land as that which shapes human and cultural identity, to the land that has been stolen and commodified through accounting language and legal systems that excluded Indigenous people. Presenters were engaging and inspiring, bringing history and ideas to the fore that many said they had not considered before.

Some of those in attendance at the symposium came from Mennonite churches across Canada and are invested and interested in relationships between Indigenous and settler peoples. Lucia Eitzen of Langley Mennonite Fellowship has been learning about Indigenous issues and has participated in walks for reconciliation in British Columbia, but she admits she has lots to learn. “I am a beginner in this conversation and know little,” she said. “I was worried I wouldn’t get all the terminology right and unintentionally offend people. I was determined to just listen. Being warmly welcomed and accepted for who I am baffled me at first, but I really liked it,” she said.

This warm welcome was not lost on others. In fact, it seemed as if welcome, hospitality and embrace were the unspoken themes of the conference. Each speaker received beautiful introductions, complete with ribbing and laughter, and finished with firm, lasting hugs from the leadership of NAIITS. There was an intimacy that everyone was invited into during presentations, the NAIITS graduation, and a beautiful celebration of the life and work of Wendy Beauchemin Peterson, who passed away last October. This intimacy was palpable as Terry LeBlanc, one of NAIITS’s co-founders, began to refer to those in attendance as the “NAIITS family.”

This was not a conference for strangers but a meeting place for brothers and sisters. Muriel Bechtel of Cambridge, Ont., commented, “I was very moved that this community sees us all as family and all that means.”

Carol Penner of Conrad Grebel University College also pointed this out, saying, “There was a real emphasis on relationship and community; I don’t think I’ve ever been at a conference where there was so much storytelling about how people knew each other and what they have meant to each other.”

The presenters spoke about the history between settlers and Indigenous people from Indigenous perspectives. It was not flattering or sugar-coated. In its honesty, it was as if there was some undoing of the stories of the past that served to justify the actions of settler Christians.

Denise Falk of Bethany Mennonite Church in Niagara-on-the-Lake, Ont., said: “As Mennonites, we cannot feel the superiority of blamelessness. Mennonites also ran residential schools and as a church that wronged so many people. The church cannot be silent now but must lead the way to reconciliation and justice.”

Reasons for attending the NAIITS symposium were varied. Curtis Krahn of Steinbach, Man., said that the content of the symposium had influenced his faith far beyond what any church had. Krahn was also a close friend of Wendy Peterson.

Josie Winterfeld of Stirling Avenue Mennonite Church in Kitchener, Ont., shared that her congregation had come in contact with concepts of reconciliation with Indigenous people and they told her, “Don’t let us drop this.”

Randy Haluza-Delay, who teaches sociology at King’s University in Edmonton, attended the symposium because of his interest in the different shapes in which Christianity can be found.

It was evident that there is still a great deal of real, feet-on-the-ground and seat-at-the-table work to be done regarding reconciliation in Canada and abroad. Ray Minicon, an Indigenous man from Australia, demonstrated this as he shared stories from his work in Australia. They were all too familiar to a Canadian audience: residential schools, reserves, stolen children and churches misusing power.

All over the world, the conversation of reconciliation and justice for Indigenous people is taking place. In her presentation, “A search to belong: Cultural reclamation on the Jesus way,” Crystal Porter made the statement: “The church that was so loud in the past cannot be silent in the present.” 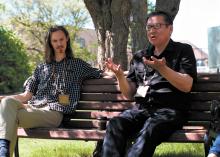 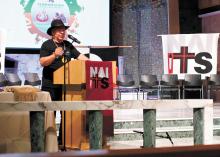 Terry LeBlanc, one of the co-founders of NAIITS, welcomes the 200 participants at the NAIITS symposium held in Toronto in early June. (Photo by Zach Charbonneau) 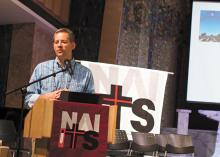 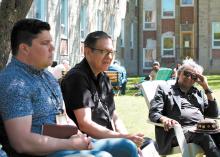 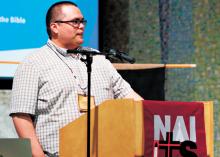 Danny Zacharias shares his paper, “Graceland: The Land as Relational Gift in the Bible.” (Photo by Zach Charbonneau) 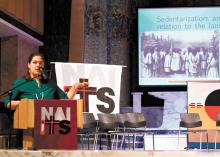 Marilou Maissoneuve delivers her paper, “Being Christian and Innu: Is Reconnection with the Land Possible? A Historical and Anthropological Analysis.” (Photo by Zach Charbonneau) 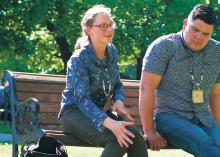 Debby Krahn and Cam Eggie listen as Sara DeWeerd shares her reflections on the symposium. (Photo by Zach Charbonneau)