Eighty-five years of presence and witness 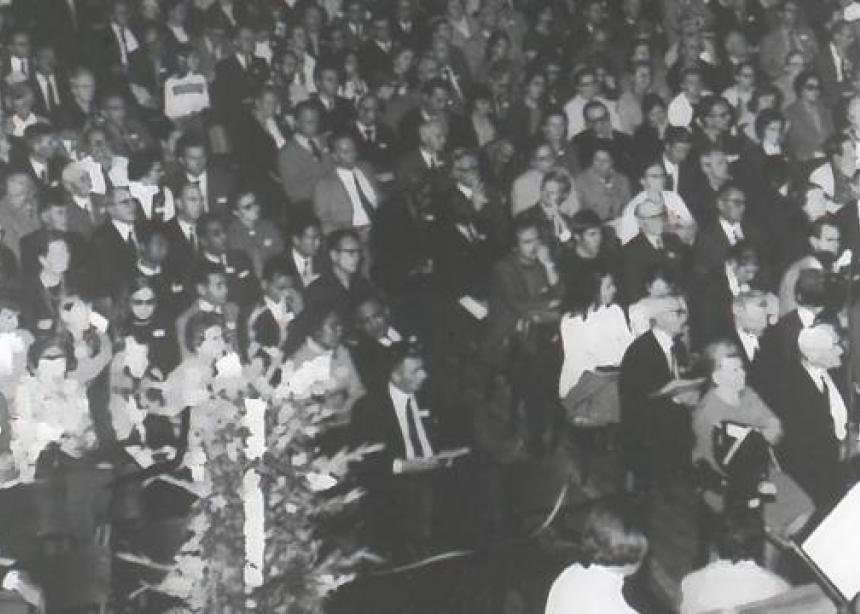 The first Mennonites arrived in Brazil in 1930, coming as refugees from Russia/Ukraine, where their property, churches and schools were taken over by the state during the Stalin years.

In 1929 thousands of Mennonites (15,000–25,000) and other groups took their few belongings and travelled to Moscow to get visas. Only 5,000 received permission to leave the country. Arriving in Germany, they were not allowed to stay there, so they had in mind to migrate to Canada. Because of the economic depression of the 1930s, Canada only accepted a few of these migrants, mainly those who had close relatives already living in the country and who were in good health.

Two other countries open to receiving them were Brazil and Paraguay. European and North American church leaders encouraged the refugees to move as a group to Paraguay, where there was already a settlement of Mennonites from Canada. In Paraguay, Mennonites already had several privileges like exemption from military service and the right to self-government for the colonies. Around 3,000 chose to go to Paraguay.

Another 1,300 chose to move to Brazil. The reasons for this choice are not very clear. Arriving in Brazil, they settled in a hilly, rainforest region in the southern state of Santa Catarina, a completely different landscape from what they had known in Russia. One settlement group (Stolz Plateau) did not develop, and instead they found a good place in Curitiba, in the state of Parana, 300 kilometres to the north. Here, there was a colder climate and prairie land. Within a few years, all Mennonites had moved away from the original settlement place.

Among the settlers there were three different groups: Mennonite Brethren, Mennonite Church (kirchliche) and Evangelical Mennonites. Initially, they held all the services together except the assembly meetings, and everything was in the German language. During the Second World War—which Brazil joined in 1942—the use of the German language was prohibited in public, until the end of 1945. So the churches conducted their services in Low German, sometimes in Russian, and even began to use Portuguese.

The first outreach project began in 1948 with an orphanage for abandoned children, and with it the first exclusively Portuguese-speaking congregation, in the outskirts of Curitiba. It had the support from Mennonite Brethren (MB) workers from North America. Several other church planting projects followed, and soon the Association of Mennonite Brethren Churches was formed with Portuguese-speaking congregations.

In 1994, the German-speaking conference and Portuguese-speaking conference merged, creating COBIM (Convenção Brasileira das Igrejas Evangélicas Irmãos Menonitas: Brazilian MB conference). Today, COBIM has more than 60 congregations and several mission projects in Brazil and Africa. (This conference is engaged in the process of becoming a member of Mennonite World Conference.)

In 1955, the Mennonite Board of Missions and Charities of the Mennonite Church in U. S. and Canada sent their first missionaries to Brazil. Several congregations were planted in São Paulo, central Brazil, and the Amazon region, forming the Alliança Evangélica Menonita (Evangelical Mennonite Alliance).

The Associação das Igrejas Menonitas do Brasil (AIMB: Association of Mennonite Churches in Brazil) resulted from a merger of two German-speaking groups and other evangelical Mennonites. AIMB and the North American Commission on Overseas Mission (COM) joined the church planting efforts of AEM and began to send missionaries in 1976. AEM now has some 35 churches and congregations and mission projects in Brazil and Albania.

In 1965, Mennonite Central Committee started several agricultural and social development projects in northeast Brazil. This outreach was ended in 2012. Some local organizations continue working on several of the projects, in promoting peace and reconciliation. Three northeastern congregations were planted and are affiliated with AEM.

The AIMB conference has nine congregations. For many years, they had their services in German. In the 1980s, this began to change, as the churches moved toward using more Portuguese to reach out to neighbours and to the Brazilian context. Their strongest mission project is Associação Menonita de Assistência Social (AMAS, a Mennonite relief organization), with six daycare centres for low-income families, caring for more than 1,000 children daily.

Both AEM and AIMB are members of Mennonite World Conference.

In 1960s, a group of Holdeman Mennonites (Church of God in Christ Mennonites) moved from the U.S.A. to central Brazil (400 km west of the capital city Brasília) and formed a colony in Rio Verde, in the state of Goiás. Their contact with the larger Mennonite community in Brazil is mainly through Anabaptist/Mennonite literature they distribute.

After 85 years in Brazil, the number of church membership of all conferences is estimated to be 12,000 to 15,000. In the last 30 years, there have been several divisions and splits in the churches and conferences, mostly because of Pentecostal/charismatic renewal movements. A desire to move away from the German ethnic church culture has also been a factor that led to the formation of several independent Mennonite congregations.

Main challenges for Mennonites in Brazil

Identity. What does it mean to be a Mennonite Christian in Brazil, where 90 percent of all evangelical Christians are Pentecostal/charismatic/neo-charismatic? Related to this, Mennonites still have an ethnic church culture. One leader observed: “We do not live in the colony anymore, but the colony is still in us.” Brazilians do not understand this Mennonite mindset and find it foreign to their culture.

Outreach and acculturation. It is a challenge to be committed and faithful to a Jesus-centred interpretation of the Bible in the midst of a context of all kinds of religiosity, Christian “superstition,” “direct divine revelation,” power controlling-centred gospel, prosperity gospel, etc.

Diversity and conflict. The congregations with the German speaking background are reaching the end of their language change. Some have two services—one in each language—and others have bilingual worship. Interethnic marriages are more common than before. The new baptized members are mostly from non-German background. Cultural and theological diversity are every day more present.

Leadership. The concept of a servant leader, appointed by the congregation, forming team leadership, is being challenged by a view of leadership that is power-oriented, hierarchical, productivity-centred, even self-appointed leaders.

But the Holy Spirit is moving among the different conferences and congregations, enabling them to support and help each other more. The theological school Fidelis belongs to the three bodies: AEM, COBIM and AIMB. Other projects as the Mennonite school Erasto Gaertner and the nursing home Lar Betesda, are under a joint board with the Mennonites and Mennonite Brethren.

For the Mennonites in Brazil, the need to dialogue, to share experiences, to learn from each other is becoming ever more important.