Mennonites in angst over Ukraine invasion 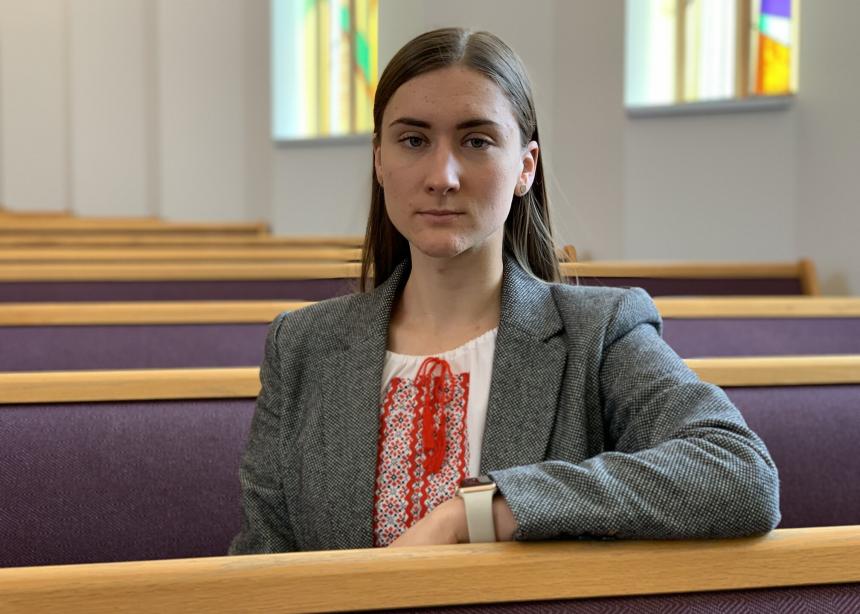 Winnipegger Valerie Alipova is worried about her family in Ukraine, where she was born and raised. ‘I have never been this stressed in my life,’ she says. (Photo by Aaron Epp)

It’s 10:30 a.m. in Winnipeg, but for Valerie Alipova, it might as well be after supper.

Alipova, associate pastor of Bethel Mennonite Church in Winnipeg, has been living eight hours out of sync with the rest of Manitoba ever since Russia invaded Ukraine towards the end of February. Alipova was born and raised in Zaporizhzhia, where her mother and two sisters were living at the time of the invasion.

Her sisters have since left the city. One of them, who has two children under the age of 10, is now in the Czech Republic. The other, who is six months pregnant, has fled to a small town in western Ukraine. Alipova’s mother, a Mennonite pastor, has decided to stay put so that she can help her community.

“Because of the time change, I don’t go to sleep until I hear from my mom—that she is awake and safe and alive,” Alipova says. “During the day, I’m [watching] the news the entire time, making sure that while my family sleeps or tries to sleep, nothing bad happens.”

“I have never been this stressed in my life,” she adds. “It has been very difficult to be far away from my family and not be able to help.”

Alipova is one of the many Mennonites across Canada worrying about family and friends in Ukraine, where Russia has instigated the largest military conflict on European soil since the Second World War.

“It’s been stressful, to put it lightly, for all of us,” says Emma Giesbrecht of Ottawa, who is close friends with two families in Ukraine as a result of her late grandfather John Giesbrecht’s frequent trips there. Giesbrecht accompanied her grandfather on one of those trips in 2013. One of the main reasons for the trip was to visit Schönsee—the village in the Molotschna Mennonite settlement where her great-grandparents were married.

“I’m calling it the Catch-22, where you need to be informed at all times, but then what you’re being informed of is just not nice,” she says.

When Canadian Mennonite spoke with Giesbrecht on March 4, she and her family had been in constant contact with one of the families they are close to. The family lives in Odessa, a port city on the Black Sea in southern Ukraine. The Giesbrechts had yet to hear from the other family.

“We’re just trying to make sure that they’re safe and trying to help any way we can, even though we’re literally an ocean away,” Giesbrecht says.

Otto and Florence Driedger feel the same way. The Regina couple who co-pastor Peace Mennonite Church have visited Ukraine frequently over the last 30 years. They have made hundreds of friends there while helping to develop social-work and restorative-justice education at Odessa University.

Since the invasion began, the Driedgers have been in touch with a few of their Ukrainian friends. They have also enlisted their church community to provide prayer support.

“It’s heart wrenching,” Florence says, “but what carries us through is our strong faith.”

Canadian Mennonites are resonating with the crisis in Ukraine for a few different reasons, says Aileen Friesen, associate professor of Mennonite studies at the University of Winnipeg and co-director of the Centre for Transnational Mennonite Studies.

One of the key reasons is that there is a direct tie to Ukraine for Mennonites whose families came out of that country in the 1920s and 1940s, and who grew up hearing stories about Ukraine.

Another reason is that heritage trips to the former colonies of Molotschna and Chortitza have given Canadian Mennonites a direct experience of the land and the people living there. At the same time, Mennonite historians like Friesen have developed relationships with Ukrainian archivists and academics who have assisted them with important research.

“These are people who helped us understand our own history, and that should make it personal for Mennonites who have roots in Ukraine.”

Friesen, who has visited Ukraine and had been planning before the invasion began to travel there in May, has been checking in with her friends to make sure they are okay.

“I study Russian history, I study Ukrainian history, and I never thought this [invasion] would happen,” she says. “It’s been heartbreaking.”

Alipova keeps thinking about a phrase she once saw online: “The only thing that separates us from refugees is luck.”

“This just gives us perspective on how important it is to have peace in our lives and be in safety and have a good night’s sleep,” she says. “Just those simple things have so much more value now, knowing that people in Ukraine don’t have them.”

Related stories:
Watch: MCC partner in Ukraine asks for prayer
Prayer for the war in Ukraine 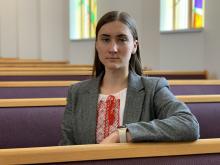 Winnipegger Valerie Alipova is worried about her family in Ukraine, where she was born and raised. ‘I have never been this stressed in my life,’ she says. (Photo by Aaron Epp)