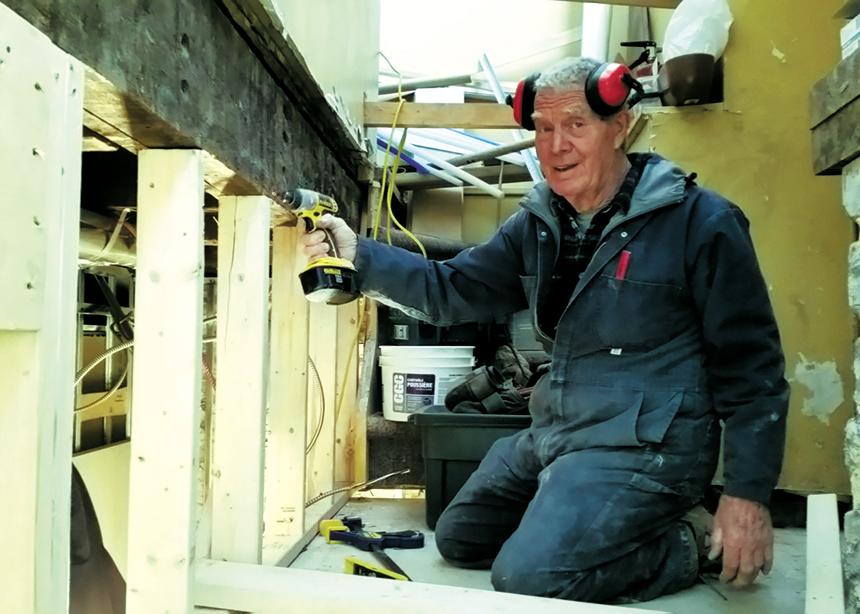 Every night, from November to April, volunteers from Hochma Mennonite Church in Montreal open its doors as a warming centre for some 40 people who are experiencing homelessness. The church wants to become a licenced shelter operating year-round, but its building needs roughly $200,000 worth of renovations to bring it up to code.

Brian Bauman, mission minister for Mennonite Church Eastern Canada put out a call last December for skilled volunteers to help Hochma with the renovations. Nicholas Hamm, the Ontario Unit chair for Mennonite Disaster Service (MDS), saw the notice in his church bulletin and recognized an opportunity for a unique partnership.

While MDS typically responds to natural disasters, part of its vision is to “inspire and equip every Anabaptist congregation to respond in Christian love to those affected by disasters, including in their neighbourhoods.” Partnering with the regional church to help Hochma fit that vision. Disasters “come in different forms,” he says.

Hamm described how he “let God open the doors for us,” marvelling at how all the pieces fell into place for the project to go ahead.

The MDS volunteers spent a week in March renovating the church basement so it can serve as a licenced shelter and qualify for additional funding. The basement needs proper bathrooms, a shower, laundry and kitchen, as well as an exit that meets the fire code. The MDS crew worked in two areas: preparing the furnace room for a new furnace; and framing, drywalling and rebuilding the basement exit to comply to the building code. Two of the volunteers returned later in the month to complete the work on the exit area.

Hochma takes its name from Hochelaga-Maisonneuve, the low-income part of Montreal where the church is located. Hochma also means “wisdom in action” in Hebrew.

The church has a history of responding to needs with Christian love. It began in 2004 with a desire to care for physical as well as spiritual needs. Recently, the church was active working with a wave of refugee claimants, mostly Haitians, because they feared being sent back to Haiti from the U.S. Hochma became an emergency centre, helping 500 refugees in three months, until other established organizations could get caught up and the flow of refugees slowed.

The husband and wife team of Michel Monette (unpaid) and Lyne Renaud (paid for 16 hours a week) helped establish Hochma and offer pastoral leadership, while running their own information technology company. Renaud envisioned the church as a café, a safe place to talk and walk alongside people. Hochma began offering a Sunday morning breakfast to people in 2013 and opened the shelter in 2016.

Monette describes the work of the MDS volunteers as “such a great blessing” because Hochma won’t need to spend as much money on the renovation, and it will speed up the timeline for completing the project. “For me,” he says, “MDS means Mennonite Disciples in Service.” 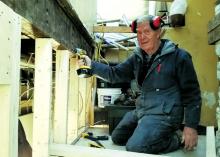 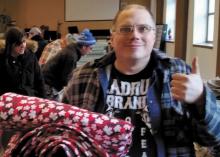 Silvain L’hereault, Hochma Mennonite Church’s shelter coordinator, gives a thumbs-up in thanks for the 30 quilts from Mennonite Central Committee Ontario that will be enough to carry the ministry through the season and allow it to discard some of its threadbare bedding. (Photo by Nicholas Hamm)