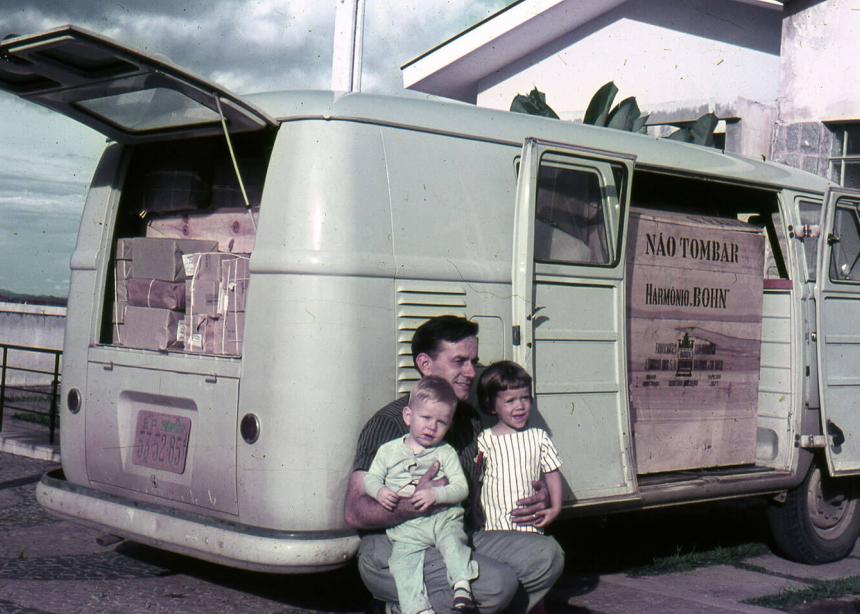 From seafaring cowboy to Christian book publisher, Ken Schwartzentruber embraced life and adventure with a hands-on attitude and a commitment to God. Born to the late Allen and Elizabeth (Wagler) Schwartzentruber in Petersburg, Ont., on April 30, 1928, his light flickered out on Nov. 17, 2016, in New Hamburg, Ont., at the age of 88, with his family by his side.

Before he died, a photographer captured images of Ken’s thin, fragile hands resting on a blanket, touched by the hands of his family members. For them, the images are symbolic.

“Over the years Daddy’s hands carried out—in very practical terms—the work of God in the places where he lived and served,” daughter Michele Rae Rizoli of Toronto stated in the family’s funeral tribute.

Ken learned to work with his hands on the family farm near Petersburg, and, like many young Mennonites in their community, left school after completing Grade 8 to help out. Ready for a new adventure by the age of 17, he put his “cowboy” skills to work aboard a ship transporting farm animals to post-Second World War Europe. The trip sparked his desire to explore the world and to become involved in mission work.

Upon returning to Canada, Ken began dating Grace Bender and discovered that she shared those desires. They married in 1952, and Ken began preparing for ministry. He and Grace moved to the U.S. for post-secondary studies at Eastern Mennonite College in Harrisonburg, Va., and Goshen (Ind.) Biblical Seminary. After  graduation, the Schwartzentrubers returned to Ontario, where Ken served as a part-time pastor and held a few other jobs to put food on the table, including one at a Christian bookstore in London, an experience that prepared him for his role in Brazil.

Ken and Grace, who predeceased him on March 9, 2005, served with the Mennonite Board of Missions (now Mennonite Church Canada Witness and Mennonite Mission Network) in Brazil from 1961 until retiring in 1993. In addition to serving a local congregation with Grace, Ken managed four bookstores in the Livraria Cristã Unida (United Christian Bookstore) chain and launched a publishing company that breathed life into more than 30 books.

With three young daughters in tow and another baby on the way, the Schwartzentrubers couldn’t have arrived in Brazil at better time. In 1962, a year after their arrival, Pope John XXIII introduced reforms to create more openness in the church. To feed a growing hunger for theology among the populace, the bookstores offered a wide selection of resources from many denominational publishers.

During their 32 years in Brazil, the Schwartzentrubers became good friends with Otis and Betty Hochstetler, who also ran bookstores through Mennonite Board of Missions.

“Ken was a dear friend who loved the church, his family, and reflected this in his way of working in the bookstores and with people,” Otis wrote in an email. “Ken had the gift of knowing what and how much to have in stock for the needs of the Christian community and beyond.”

Ken empowered others to use their gifts, too. In the early years, he trained male employees for bookstore ministry, only to see them leave to become pastors. Although that might have indicated the impact of Christian literature, it frustrated him. He changed his approach. He began hiring and training women because he knew they would stick around, since women were not permitted to become pastors at that time.

Keeping the shelves stocked permitted Ken to indulge in his love of travel and his hands-on approach to life. He frequently bussed to the large city of São Paulo to personally select books from publishing houses for his stores. At other times, he used the family’s well-used, second-hand Volkswagen van to transport goods like church pump organs and books. He repaired and maintained the van to meet family needs, too, once adding a platform over the rear seats to create a camping van.

Ken’s passion for ministry, and his inclination to work with his hands, continued after retirement. He spent many hours volunteering at Mennonite Central Committee’s New Hamburg Thrift Centre.

After Grace’s death and a period of loneliness, he met and married Robena Gerber nine years ago.

When he was once asked what he would do differently if he knew his life was almost over, Ken replied, “I wouldn’t do anything differently because every day I try to live the way God wants me to live.” 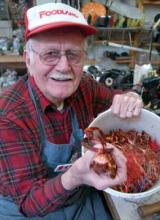 My wife Valetta and I were missionary colleagues (Mennonite Board of Missions), living about 20 minutes away in Paulinia, São Paulo. Kenneth and Grace were Aunt and Uncle to our children, and of course all our children were cousins. We had a lot of good times in and out of our homes. I can verify the truth about Kenneth's work and relationships. I think that as Kenneth was preparing for one of their last one year "furloughs" in the USA and Canada, he could not find someone to manage the Campinas bookstore. We were such good friends that I said that when he steps on the plane, I would be taking over his job as manager of the bookstore. I had little commercial interests and no experience. Kenneth and I walked side by side for a couple of months, doing everything that he would normally do. That year for me was like two years long but what was accomplished was even more than that. I was able to find and move the store to a better building. Another Mennonite colleague, Lee Hertzler and I made all the shelves, cabinets, and other furnishings. Thanks to Kenneth I was given the opportunity to gain a lot of valuable commercial experience.