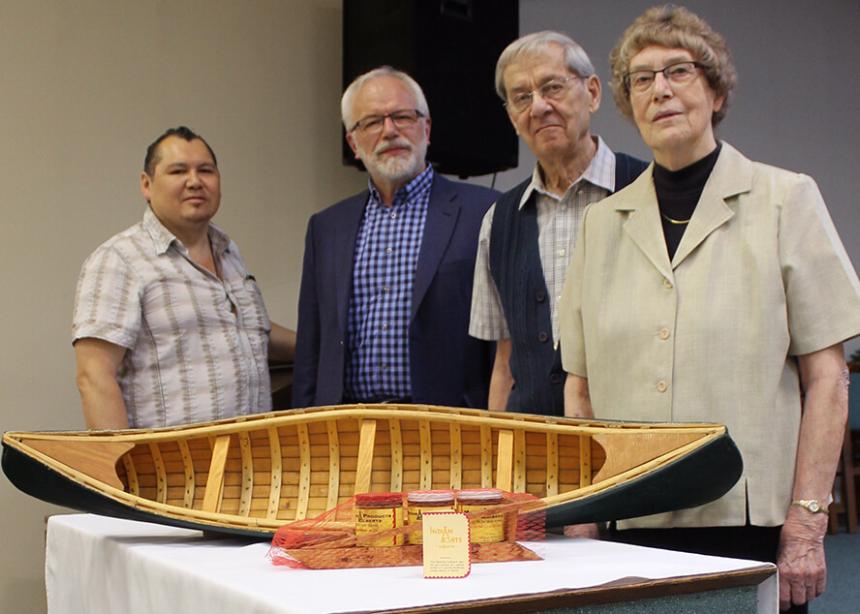 Participants at the Mennonite Historical Society of Alberta spring conference, held on April 30, 2016, at Holyrood Mennonite Church, Edmonton, spent time “Rethinking Mennonite history in light of the Truth and Reconciliation Commission,” the theme of this year’s event.

Roger Epp, professor of political science at the University of Alberta, an honorary witness at some of the Truth and Reconciliation Commission gatherings and author of We Are All Treaty People, told the crowd that many Mennonite settler histories need to be looked at again, and the places where they intersect with indigenous history need to be recovered.

He experienced an epiphany of sorts a number of years ago while visiting a museum in Oklahoma. “Our family history didn’t account for the Cheyenne people who had survived Custer’s attack,” he said. “My family arrived in the land rush that followed. I didn’t know, until I was in the county museum looking at a map, that my ancestors owned land in the checkerboard right next to Cheyenne land.”

This part of his history didn’t fit the story as he had understood it to that point. “There is a Christian gloss on the settler paradigm that is dangerous, where the land stands in for the ‘promised land,’ ” he said. “How easy it is to insinuate ourselves into that story of Exodus. . . . Who gives a thought for the Canaanites when you are taking possession of the ‘promised land’? We know this cannot be disentangled from the dislocation and deliberate starvation of indigenous people.”

Isaac and Millie Glick saw the destructive results of Indian Residential Schools first hand, having spent a lifetime of working alongside indigenous people. On behalf of Mennonite Central Committee, they helped communities develop successful programs  in the areas of education, health and gardening, and coordinated more than a hundred Mennonite Voluntary Service workers. In both Sandy Lake and Chipewyan Lake, Alta., the Glicks helped with schools. (Read more about their new memoir, Risk and Adventure.)

He said they experienced a people “used to being pushed down, pushed back and ignored . . . [but] mutual respect quickly occurred when they were treated with respect. We knew very little about ‘Indians’ and ‘residential school’ and ‘Doctrine of Discovery.’ . . . Our assignment, as a one liner, was to see what could be done to help people help themselves.”

Chief Calvin Bruneau of the Papaschase First Nation presented a first-hand account of the ongoing story of his people. He told of the struggle to uncover and reclaim the history and identity of those who were defrauded of their land and scattered in the late 1800s.

Born in Bonnyville, Alta., Bruneau’s grandmother married a non-status Métis, and, according to the Indian Act, lost her status and had to leave her community. Bruneau moved in the 1980s to Edmonton, where he grew up. In 1995, he found out from relatives that his family is descended from Chief Papaschase.

Bruneau was heavily involved in the struggle to have Edmonton’s Rossdale burial ground recognized and protected when plans to expand a power plant were threatening to destroy it. The site is now a memorial where 31 Papaschase ancestors, as well as other early inhabitants of Fort Edmonton, are buried.

A story told by Epp helps put Mennonite settler history arm-in-arm with indigenous history and challenges common assumptions and stereotypes. “Almighty Voice” is a name many Alberta students remember from social studies lessons, which told of a young indigenous man who was accused of stealing a cow, shooting a police officer, escaping prison and leading the North West Mounted Police on an 18-month manhunt. The hunt resulted in Almighty Voice and two of his relatives being cornered by police officers, shot at with cannons and killed in a grove of trees near Duck Lake Sask., on May 30, 1897.

When the story is retold, with more pieces coming to light, the picture of the young man changes. The cow in question was not stolen, but was slaughtered against government rules so Almighty Voice could feed his family, because the government was not coming through with promised aid for the starving people. He would have been released from jail within a day; however, an officer at the jail taunted him by saying he would be hanged. Almighty Voice believed the officer, and escaped. Convinced his life was in danger, he shot another officer who refused to listen to his warnings not to approach. After that, he was on the run until his death.

The Mennonite connection is a woman from Tiefengrund, Sask., named Amelia Wiehler, who was a friend to Almighty Voice. He once risked his life to get groceries for her, travelling across ice in winter. She, in turn, provided a safe place for him to stay.

Participants left the conference encouraged to rethink their own settler histories and to recover stories and relationships alongside their indigenous neighbours.

When I started learning the truth about Europeans arriving and settling the Americas, I felt sick. And a deep contempt for the glossed over history textbooks we got at school and all the other white lies. It was not much about noble explorers meeting noble Natives. Or savage unreasonable ones. It was actually much about an unquestioned sense of white Christian entitlement. It was much about conquest, claiming, killing, forced colonizing, etc, etc. Really a horrid, disgusting 500 years of history in many respects.
But of course many innocent settlers also came, good people. But I often wonder how much they questioned all this free land and how the Natives were being treated. Not much it seems, though they were struggling to survive themselves. Such topics would make many interesting articles, novels, movies and academic studies.
To a large extent, we always have to drive ourselves and society forward, championing the Human Rights of all, but accurate history and some restorative justice are also good things. So, I commend Mennos and others who look at these matters. Real history is truthful history and takes into account all sides. We were not those early creepy whites, but we benefited from their killing and thievery.
I prefer often to look at it in frank terms, cuz I live in an area with many Natives and I know now why many are so messed up. Hundreds of years of abuse may take hundreds of years to heal. Accepting the depth of the persecution is part of learning how we might assist the healing. Also, our own healing from lingering racism, a sense of religious superiority, distorted or outright false history and other things.
May all peoples learn to live in harmony with each other and Earth. Whites have also been foremost in destroying the ecosystems of the Americas and though there are many Menno farmers here, few care about organic farming.
There are endless things we can say about all this. Thanks for opening these topics.