Equal expressions of love for God 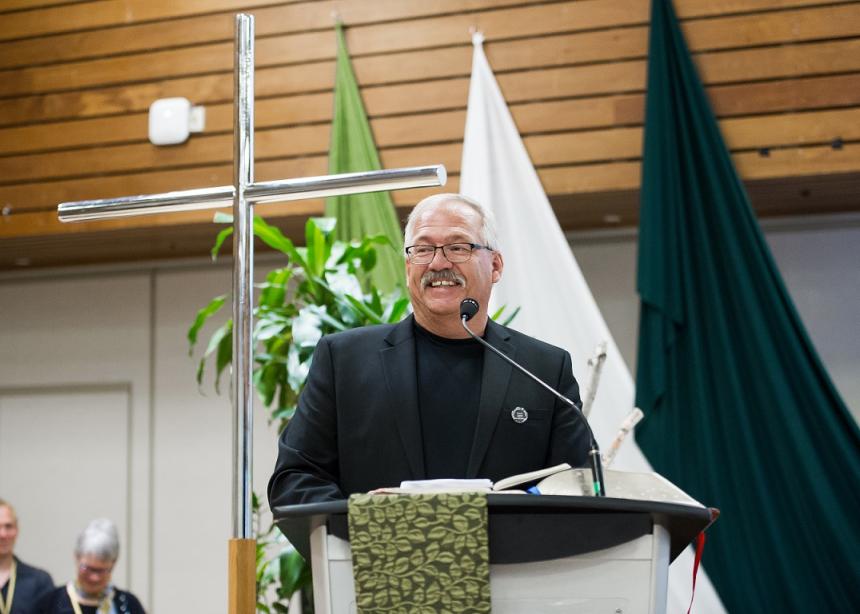 Serving communion at the 16th Biennial Convention of the Evangelical Lutheran Church in Canada (ELCIC) was a profoundly humbling experience for Willard Metzger.

“I felt as though I was surrounded by a huge cloud of Anabaptist witnesses from the past,” says Mennonite Church Canada’s executive director.

The significance of that statement is deeply rooted in history.

This year marks the 500th anniversary of the Reformation, a time when distinct theological differences—such as infant baptism versus confession-of-faith baptism—separated many brothers and sisters in Christ and brought persecution upon on Anabaptists, including Mennonites.

In 1980 the Lutheran World Federation (LWF), a global church body similar to Mennonite World Conference, invited Mennonites to join in celebrations for the 450th anniversary of the Lutherans’ Augsburg Confession of Faith. However, it was tough for Mennonites to celebrate a confession of faith that condemned their views, even though the centuries-old memory of persecution had faded.

The invitation sparked a 30-year reconciliation process. In 2010, the Lutheran church explicitly asked "God and our Mennonite sisters and brothers for forgiveness for the harm that our ancestors have brought upon the Anabaptists."

Ever since then, the ELCIC and Mennonite Church Canada have sought ways to build on that apology, says Rev. Susan Johnson, ELCIC’s national bishop.

The LWF planned for an ecumenical approach to the international commemoration of the Reformation. “The ELCIC adopted the same principle moving forward,” writes Johnson in an email interview. “We also want to focus not on the division of the past, but on the ways we have been able to work towards reconciliation of relationships and the ways we are being called forward onto a further journey of reconciliation.”

Fast-forward to 2017 and the ELCIC convention, held July 6 to 8 in Winnipeg, Man. “So when we asked ourselves ‘Who needs to be at our convention as we commemorate the 500th anniversary of the Reformation?’ Mennonite Church Canada and Willard Metzger's name had to be on the list,” Johnson recalls. “We wanted to hear from different voices in preaching and we wanted to honour our guests by having them as involved as possible in our National Commemoration Worship Service.”

“In this single act of reconciliation, of inviting me, an Anabaptist, to serve communion, Lutherans accepted our divergent understandings as an equal expression of love for God,” Metzger reflects. “Being invited to offer communion was not a statement of agreement. It did not mean that we are all of one mind. But it did acknowledge that we serve one God. We come to the same source of mercy and forgiveness. We go to the same place for redemption and restoration.”

Johnson reports that the convention welcomed Metzger to their event as though he were family. “Many of the delegates have family connections with Mennonites, so they really appreciated this sign of welcome and inclusion. Willard has been a blessing to me as a colleague, and it was a joy to have my church experience his faith, wisdom and warm sense of humour.”

Reconciliation and change were also the subject matter of a sermon Metzger presented to the Convention. He suggested that after 500 years, it might be time for another reformation. “I think we have a youth and young adult population ready to be our reformers, so can we embrace their prophetic presence, or will we resist them in our own denominational tribe?”

All of this, he muses, provides Anabaptists with a challenge for their own community: Can we accept disagreeing viewpoints as equal expressions of love for God and learn to live with acceptance?

To read more of Metzger’s reflections on the event, see “A huge challenge.”