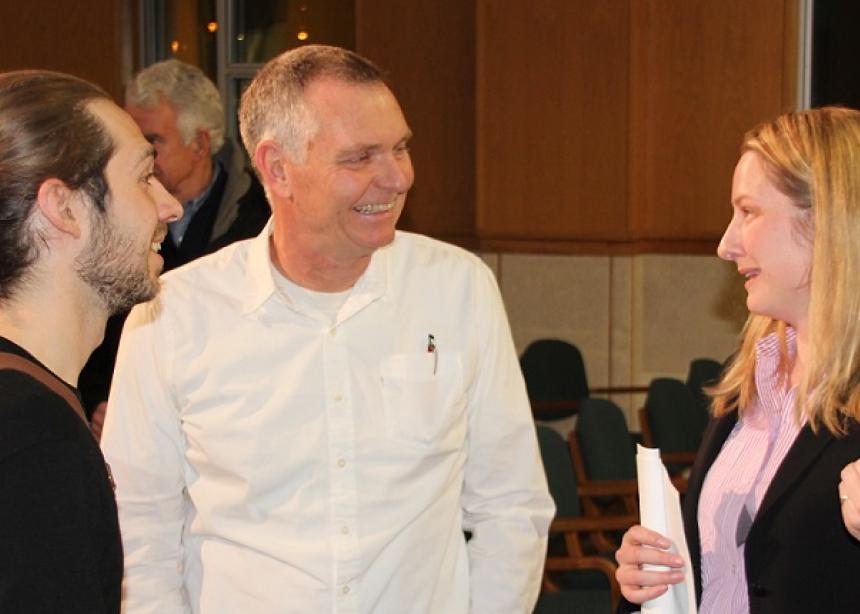 Aileen Friesen was the go-to person to help visitors order in Russian cafés at a scholarly gathering in Russia’s Far East, according to Marlene Epp, Conrad Grebel University College’s dean. Epp introduced Friesen as the inaugural J. Winfield Fretz Visiting Research Scholar in Mennonite Studies before Friesen’s lecture on ‘Muslim-Mennonite Encounters in the Russian Empire’ on Jan. 25, at Grebel.

While there are many stories and proverbs about Mennonite encounters with Jews in Russia, stories of Mennonites in relationship with Muslims are harder to come by, or to ferret out of historical records, Friesen said, noting, though, that almost everywhere Mennonites went, they were in very close proximity with Muslims.

As Mennonites settled the “empty lands” of the recently conquered Ukraine in the late 18th and early 19th centuries, they supplanted nomadic Muslim herders and horse people known as Tatars. Some of these people became herders for the Mennonites and lived in their own villages near the Mennonite ones.

Mennonite letters and diaries remember the calls to prayer sounding across the landscape drawing the Sunni Muslims to the local masjids. She noted that it is in letters and diaries where information is found rather than in written histories. In places like Davlekanovo, Muslims, Baptists, Mennonites and Orthodox Christians lived mixed together as neighbours, she explained. The town was populated by Mennonites moving from southern Ukraine and from the neighbouring area of Samara.

Under the leadership of Claas Epp in the late 1800s, Mennonites on the apocalyptic Great Trek sheltered in Muslim villages, even worshipping in their masjids as they moved farther and farther east. Some Mennonites who left Russia in the 1930s travelled to the Far East as well, encountering and living among Muslims. When they surreptitiously crossed the border into China, they were again in Muslim areas.

Friesen noted that Muslims and Mennonites had mostly lived peacefully, although the nomadic herders’ tendency to take the occasional animal was frowned upon. In Dagestan, South Caucasus, the anarchy of the Russian Revolution created space for some Muslims to violently try to get lands back from Mennonites and others.

In answer to a question from Troy Osborne, an associate professor of history and theological studies at Grebel, Friesen noted that there are no records of Muslims converting to Christianity under Mennonite mission efforts. Instead, there are records of both Muslim and Mennonite young people learning each other’s languages and fraternizing.

Friesen noted, though, that throughout the Russian Empire Mennonites felt a higher “moral status” than any of their neighbours, including Muslims. A lack of intimate knowledge of language and culture meant that Mennonites would often misunderstand their neighbours. The Muslim legal requirement to bury on the day of a death meant that Mennonite industrialist Johann Cornies thought the locals were “hiding” the bodies of those who died in a cholera outbreak. But the Muslims told him that they pitied him for his lack of faith in God’s ongoing providence.

Friesen’s lecture was well attended, with several members of the local Waterloo Muslim community present. They noted that some of the problems that Mennonites had with Muslims in the Russian Empire had less to do with Islam itself, and more to do with the non-Islamic cultures of the local Muslims they encountered.