First in a five-part series leading up to the Mennonite World Conference Assembly in Harrisburg, Pa. 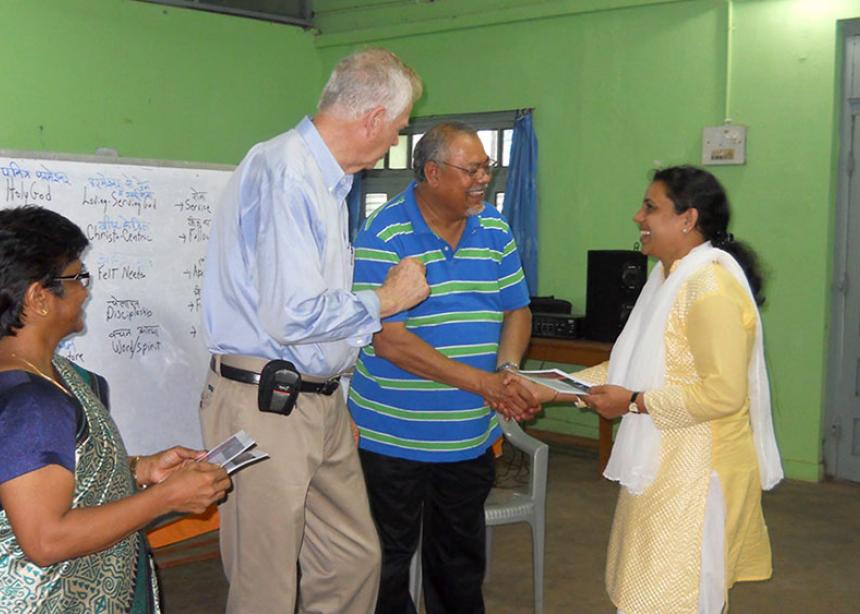 Just as there are Lutheran, Baptist and Anglican Christians, so there are Mennonite Christians. The name “Mennonite” is most appropriately used as an adjective rather than a noun. We are first of all Christians and secondarily a certain kind of Christian.

Mennonite Christians hold many beliefs in common with other believers. For instance we believe in a personal three-in-one God, who is both holy and gracious, in salvation by grace through repentance and faith, in the humanity and divinity of Jesus, in the inspiration and authority of Scripture, in the power of the Holy Spirit, and in the church as the body of Christ. But we often hold these convictions somewhat  differently from other Christians.

In our quest for unity with other believers, we often downplay our unique differences and highlight our similarities. This is as it should be, but it can also muffle the unique contributions and strengths we have to offer. For this reason, as we gather together at the end of July as a global Anabaptist community of faith, I want to focus on three core values that I believe can help us find unity. These values are rooted in the Sermon on the Mount and have been central since the beginning of the Christian era. They became prominent during the Anabaptist movement of the sixteenth century, and, in more recent times, have been rediscovered as the basic fundamentals of our movement.

Core Value # 1: Jesus Is the Centre of Our Faith

Of course, all Christians would claim this as a core value, but Mennonite Christians have applied this conviction in three specific ways. First, rather than seeing Jesus primarily as a miracle worker, a supreme teacher, one who prompts special spiritual experiences, or one who forgives our sins, we have traditionally viewed Jesus as one to be followed in daily life. We believe Christianity is discipleship made possible by the work of the Holy Spirit.

Second, while some Christians take Scripture literally and give equal authority to both the Old and New Testaments, and while others interpret Scripture according to dispensations of time or the future of Israel, we have traditionally seen Jesus as the fullest revelation of God and God’s will. We therefore interpret Scripture from an ethical Christo-centric point of view. Jesus, rather than a particular passage of Scripture, is our final authority.

Third, while many Christians place the emphasis on Jesus as their Savior from sins and eternal punishment, we have traditionally placed the emphasis on Jesus being Lord of our lives and livelihood. We follow this value even to the point of obeying Jesus instead of government authorities when there is a conflict, and we give special attention to the six statements of Jesus in the Sermon on the Mount that begin with, “You have heard it said, but I say unto you.”

Core Value # 2: Community Is the Center of Our Lives

Again, all Christians would agree this is a core value of their lives—that a sense of community is central to their family life and their understanding of the church. However, Mennonite Christians have three unique perspectives to contribute to the discussion.

First, while all Christians believe forgiveness is a key aspect of the Christian faith, most have focused on vertical forgiveness between God and human beings. While vertical forgiveness is essential for salvation, Mennonite Christians have emphasized the need for horizontal forgiveness between human beings as being essential for community. In the Sermon on the Mount, Jesus says, “If when you are offering your gift at the altar, you remember that your brother or sister has something against you, leave your gift there before the altar and go; first be reconciled to your brother or sister, and then come and offer your gift” (Matthew 5:25). Communion services become a time to celebrate community—community that has come about as a result of its members being forgiven by God and those who are participating in the service.

Second, while all Christians want to know and do the will of God, they differ in how  that is best accomplished. Some Christians rely on a person of authority or a pastor to tell them what to think or do, while others believe individual, private Bible study and prayer will allow them  to mystically receive guidance from God. As Mennonite Christians, we have traditionally committed ourselves, both individually and collectively, to searching for truth and guidance in community. To emphasize this, when newcomers become members, we ask them, “Are you willing to give and receive counsel?”

Third, while all Christians look to the church and its programs for fellowship and social interaction, they differ on how or where this can best happen. Out of necessity, due to persecution, the  early church and early Mennonite Christians met in homes, caves, and secret places in small groups. Some still see small  groups of twelve or less to be the primary unit of the church. While worship in large groups is important, many Mennonite Christians continue to find that mutual care, Bible study, and joyful fellowship can be best realized in small groups where members interact with each other face to face. A Spirit-filled group may be the closest we will come to the kingdom of God of which Jesus speaks in the Sermon on the Mount.

Core Value # 3: Reconciliation Is the Center of our Work

While some Christians believe evangelism is central to what Christians and the church should be doing, others give emphasis to various kinds of peacemaking efforts. Mennonite Christians have increasingly merged these two aspects of ministry by emphasizing reconciliation as the centre of our work. We take seriously the apostle Paul’s understanding that new and harmonious life has come to us “from God who reconciled us to himself through Christ and has given us the ministry of reconciliation” (2 Corinthians 5:18). This ministry of reconciliation is threefold.

First, it involves reconciling individuals who are estranged from God. Some Christians adhere to the sacrificial system of the Old Testament as their means of reconciliation with God, while others emphasize being justified by faith. In a somewhat different way, Mennonite Christians have emphasized the transformation of thought and life that occurs when people turn from ungodly ways and loyalties, when they open themselves to the Holy Spirit, and when they commit themselves to following Jesus in everyday life. Menno Simons, from whom we get our name, spoke often of salvation as a “new birth” or new start in life.

A second dimension of our reconciling work includes bringing conflicted people into harmonious relationship with each other. Some Christians, including too many Mennonite Christians, do little to reconcile tensions caused by offensive attitudes, words, or actions. They hope that time and acts of kindness will heal the hurts. Discipline of erring members is almost non-existent. While we as Mennonite Christians have had more than our share of conflicts and division, we have a long-term commitment to following “the Rule of Christ,” in which conflicts are to be resolved according to the guidelines given by Jesus in Matthew 18. Individuals who have offended, or who have been offended, are to go directly to each other to resolve the conflicts. They are to ask for assistance from others and the church when reconciliation does not readily take place.

Finally, the work of reconciliation also includes helping conflicted groups and even nations to live with each other in just and supportive ways. While many in secular society seem to believe that conflicts can be settled through redemptive violence, Mennonite Christians take quite literally the instructions of Jesus in the Sermon on the Mount that we are to “love our enemies and pray for those who persecute us” (Matthew 5:44). We are coming to understand restorative justice as the means of resolving the conflicts that confront and surround us.

As we approach our coming together as a global Anabaptist community of faith, what is it that will hold us together? I believe that at least in part, it will be our core values of Jesus, community, and reconciliation, which are central to our faith, our lives, and our work.

This article was commissioned by Canadian Mennonite in preparation for the July 21-26, 2015 Mennonite World Conference Assembly. See others in the series:

Part 4- “The Sermon on the Mount: living it out in mind and heart”

“Interdependency at the heart of MWC vision”

“MWC: a respite in a troubled world”

2. Palmer Becker suggests that sometimes we downplay the differences between Mennonites and other Christians. Do you agree? How much will the gathering of Mennonite World Conference in Pennsylvania in July help to strengthen a sense of Mennonite identity?

4. Becker says that small groups of believers are important for “mutual care, Bible study and joyful fellowship.” What has been your experience of small groups? Is a strong sense of community possible without close interaction? What does it mean to “give and receive counsel”?