Footprints of our ancestors 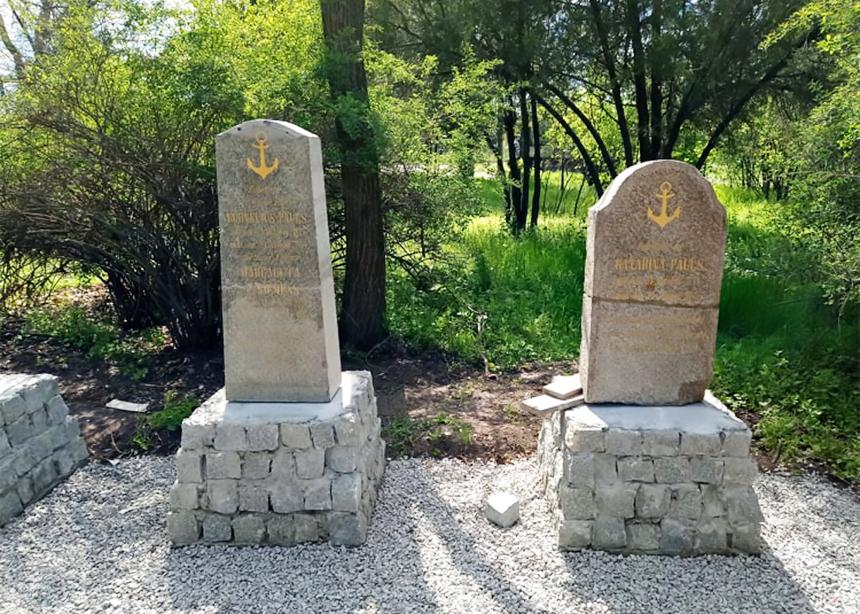 Two Mennonite gravestones were pieced back together and restored for the memorial. (Photo by Max Shtatsky)

Two years ago, a Ukrainian researcher began excavating the foundation of a dilapidated brick barn in Zaporozhye, Ukraine. Using shovels and picks, he began to unearth the rubble. Then he started to notice the German inscriptions on the broken stones. These turned out to be Mennonite gravestones.

The barn sat on the land where the Chortitza Mennonite settlement existed from 1789 to1943. The headstones came from 700 metres north of the barn, from the Chortitza Mennonite Church Cemetery, destroyed by the former Soviet Union in the 1930s. Max Shtatsky, a research scientist with the Khortytsia National Reserve, has uncovered more than 120 identifiable gravestones since his initial discovery.

On June 24, a memorial featuring 15 of these restored gravestones was unveiled in a dedication broadcasted online. Located on Khortytsia Island in the Dnieper River, not far from the settlement, the headstones have been placed around a square surrounded by trees, with an anchor at the centre. Mennonites in Ukraine often put anchors on their gravestones to symbolize they were anchored in Christ.

The memorial and gravestone recovery was made possible because of the Ukraine Headstone Project, a committee organized by Winnipeg Mennonites Werner Toews, Louie Sawatzky and Alvin Suderman. Together, they raised almost $20,000 for the project through donations from individuals and organizations. They felt it was important to honour and bring justice to their ancestors.

The Soviets turned the Chortitza cemetery first into a sports field and then built a school over it.

Toews, the committee chair, estimates that 200 to 300 graves lie beneath it. This was common in the 1930s, when Stalin’s regime tried to wipe out religion and the class of landowning peasants.

“Almost any Mennonite cemetery you go into, the stones have all been removed,” says Suderman, board chair of the Friends of the Mennonite Centre in Ukraine. “There was an attempt to obliterate the Mennonite presence from the area.” He has visited all the places in Ukraine, where his grandparents lived and his great-grandparents are buried, but he has never found their headstones. Grave markers still turn up in the bushes every once in a while.

Toews is an avid historian who has done extensive research into his family’s history. He’s been involved with the headstone project since the beginning, communicating back and forth with Shtatsky to identify names on the markers using Mennonite genealogical databases and Facebook groups.

Finding his great-great-grandparents’ tombstones was emotional for Toews. His mother grew up in Chortitza and lost many family members, including Toews’s grandfather and uncle in the Great Terror of 1937. Having physical evidence of his family’s long history in this place is meaningful for him.

Many other Mennonites might feel the same. The gravestone dates range from the beginning of the 19th century until 1935.

“One of the historians said we can safely say that from those headstones there are thousands of Mennonites across North America,” says Toews. Many of those descendants settled in Manitoba.

“It wasn’t only the Mennonites that suffered,” says Sawatzky, director of Ukraine ministry for the Mennonite Benevolent Society. “The local people went through the ’30s as well. . . . They suffered tremendously. This history is very important to them too. There is a renewed interest in the local people; they want to know their history, they want to know about the people who were there, who established many of the villages that are still there.”

The committee was surprised by the local young people’s interest in the project and is grateful for the care and hard work of all the people on the ground who brought the memorial to life.

“One of the first things you do when you go to a village is look for the cemetery, because that’s really the footprints of your ancestors,” says Sawatzky, adding it is fitting, then, that amidst all the erased cemeteries, there is a place once again to reflect and remember. 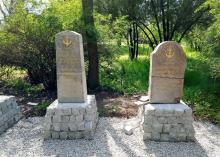 Two Mennonite gravestones were pieced back together and restored for the memorial. (Photo by Max Shtatsky) 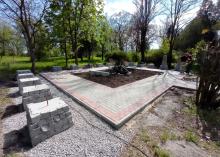 The Mennonite memorial will feature 15 of the 120-plus headstones that were recovered from the foundation of an old barn. (Photo by Max Shtatsky) 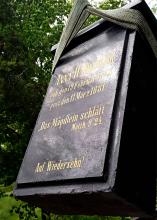 Local Ukrainians made the memorial possible through their hard work transporting and installing the Mennonite headstones. (Photo by Max Shtatsky) 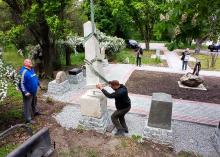 The memorial is pictured being set up in preparation for its dedication on June 24. (Photo by Max Shtatsky)