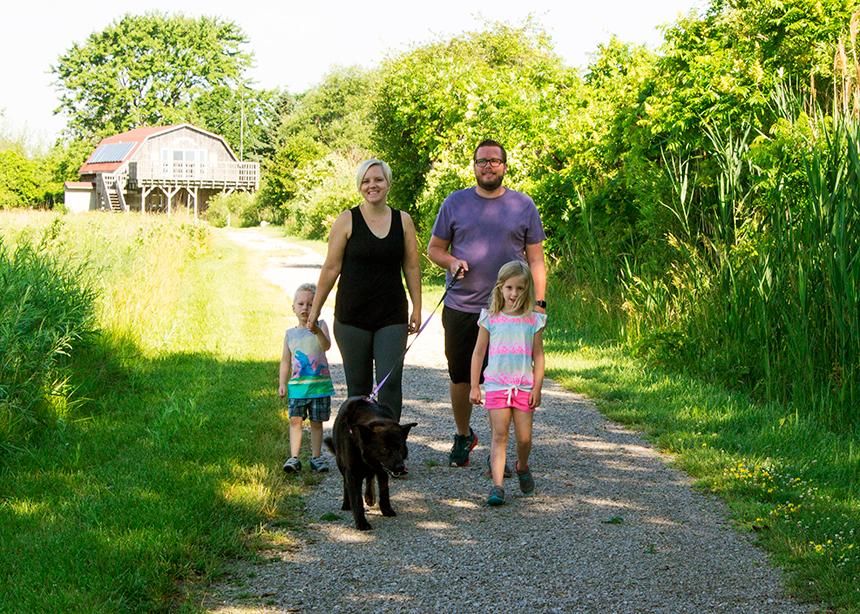 Jonathan and Jennifer Dick, along with their children Amelia and Gavin, and their dog Remy, are among families across North America who will be getting outdoors to raise money and awareness for MEDA in August. (Mackenzie Derksen Photography photo)

Mennonite Economic Development Associates (MEDA) supporters, whose efforts to create business solutions to poverty, enjoy getting together. In normal years, groups across North America have regular meetings throughout the year, and annual barbecues in the summer to raise funds for MEDA projects.

With the COVID-19 pandemic making such gatherings impossible, many MEDA hubs are planning long walks to raise funds and visibility for MEDA’s work.

The idea got started in Leamington, Ont., when someone suggested the idea of an August move-a-thon. Jon and Jen Dick, who are members of the Leamington hub board, grabbed that idea and ran with it.

“We thought it would be a good way to spend some time helping a great cause,” Jon says. The Leamington group plans to raise $20,000 for MEDA’s agricultural work in Ukraine, a country where many Mennonites have their roots. “People want to help with something they feel connected to,” he adds.

The Leamington walkathon will be a multi-generational effort involving participants from three area Mennonite Church Eastern Canada congregations and another that is affiliated with the Evangelical Mennonite Mission Conference.

Other groups that have committed to having move-a-thon weeks include the MEDA hubs in Waterloo, Ont.; Lancaster and Souderton, Pa.; and Denver, Colo. The move-a-thons will kick off with a webinar the evening of Aug. 14 and run through the following week.

“What better way to raise awareness for MEDA while also following social-distancing guidelines,” says Jono Cullar of the Waterloo hub, which will raise funds for MEDA’s work in Myanmar. A number of Ontario supporters have visited the Myanmar work, and the Waterloo group has raised $30,000 for that project over the past three years. 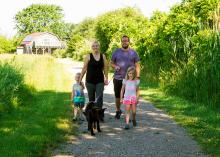 Jonathan and Jennifer Dick, along with their children Amelia and Gavin, and their dog Remy, are among families across North America who will be getting outdoors to raise money and awareness for MEDA in August. (Mackenzie Derksen Photography photo)