‘MDS was such a big part of her life’ 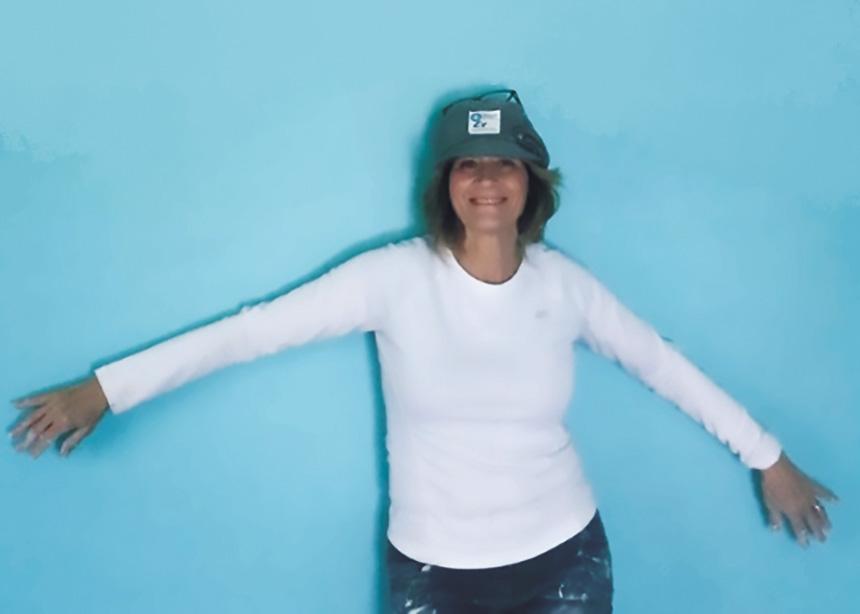 Evelyn Greenwood, who died a year ago in September, was remembered for her dedication to Mennonite Disaster Service’s mission at a ceremony in British Columbia, where her husband, son and son-in-law were volunteering in Monte Lake. (Photo by Kevin Greenwood)

All was quiet on Sept. 6, at 9 a.m., as Mennonite Disaster Service (MDS) volunteers in Monte Lake put down their tools and paused for a moment of silence.

They were doing it in memory of Evelyn Greenwood, a long-time volunteer with MDS, who was killed in a tragic accident exactly one year earlier.

They were also doing it in support of her husband Kevin, who came to Monte Lake with his son Ben, and son-in-law Steve Billing, to honour Evelyn by doing something she enjoyed—helping others through MDS.

‘A whoosh and a huge bang’

It was Labour Day in 2021 when Kevin and Evelyn, members of Leamington United Mennonite Church in southwestern Ontario, were doing some yard work at their house.

“It was a hot and dry summer, and we were digging up the front lawn to plant new grass seed,” said Kevin.

He was busy using the rototiller, so he didn’t see a pick-up truck suddenly veer off the road at high speed and on to their lawn.

“I heard a whoosh and a huge bang,” he said. The truck had sped behind him. It hurtled across the neighbour’s lawn before stopping when it hit a tree.

At first, his attention was drawn to the crash. He didn’t immediately realize that Evelyn—who was raking about three metres behind him—had been struck.

He only discovered her body when he ran to the truck to check on the driver.

He found her lying in the neighbour’s garden, about 36 metres away from where she had been hit by the truck. “She was dead. The bang I heard was her being hit.”

The cause of the crash is still unknown, and the case is still before the courts. Evelyn was 69.

Serving as a way to honour Evelyn

In the spring of this year, looking toward the anniversary of her death, Kevin, 67, decided he didn’t want to be home alone.

“Our three kids are grown and out of the house,” he said. “I didn’t want to be here by myself.”

He decided to serve with MDS in Monte Lake, both as a way to keep busy during that time, but also to honour Evelyn.

“MDS was such a big part of her life,” said the retired elementary school teacher, noting they had served together with MDS nine times in places like Texas, West Virginia, South Carolina, Windsor and Ottawa.

“We liked to go serve and combine it with some vacation.”

When his son Ben, who lives in Calgary, and son-in-law Steve Billings, who lives in Elora, Ont., heard his plan, they offered to come along.

“It was a great opportunity to support my dad and remember my mother by doing the kind of work she loved so much,” said Ben, 37, who had done MDS work once before with his father.

“She loved MDS. It was a great way for her to help others.”

For Steve, 45, it was “a chance to honour her by being part of something Evelyn deeply believed in.”

Along the way to B.C., they spread Evelyn’s ashes in places she loved, like Lake Louise.

A moment of silence and reflection

When the three arrived in Monte Lake, they told project director Roman Heuft why they had come and asked about holding a moment of silence on Sept. 6 at the exact momentof her death a year earlier.

“It was so inspiring to hear why they had come to serve,” he said, adding that he was honoured “they were willing to include us in remembering Evelyn, and allowing us to support them.”

When the anniversary of the time of her death came, crews at all sites in Monte Lake paused for a moment of reflection.

At the house where Kevin, Ben and Steve were working, the volunteers formed a circle and held hands.

“I cried,” said Kevin of the time of silence and prayer. “It was really meaningful.”

“It made me feel closer to her,” said Ben. “I think she was smiling down on us as we did that.”

For Steve, it was “overwhelming and emotional.”

After the memorial, Kevin, Ben and Steve spread some of Evelyn’s ashes at the work site.

For Heuft, it was a very moving experience.  “It touched all of our hearts,” he said. “I’m glad we could be part of their journey of healing and recovery.” 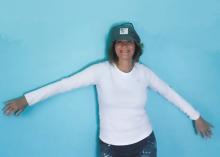 Evelyn Greenwood, who died a year ago in September, was remembered for her dedication to Mennonite Disaster Service’s mission at a ceremony in British Columbia, where her husband, son and son-in-law were volunteering in Monte Lake. (Photo by Kevin Greenwood) 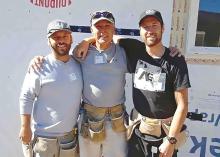 Steve Billing, left, Kevin Greenwood and Ben Greenwood are pictured at a memorial service for Evelyn Greenwood on an MDS worksite in Monte Lake, B.C., in September. (Photo by Roman Heuft)