MCC responds to bombing in Gaza 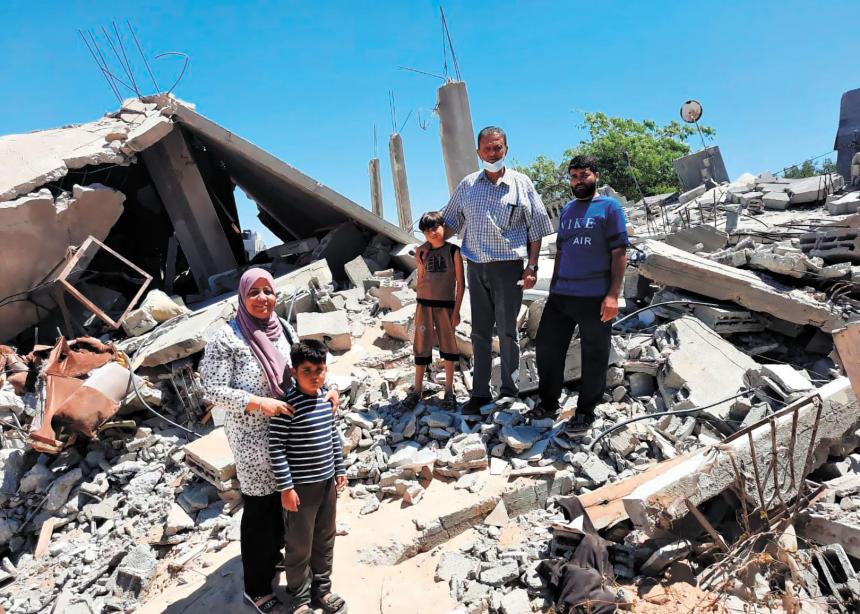 Mohamed Al-Attar, at right in blue, lost his wife, children and his home during the violence in Gaza in May. Rifqa Hamalwai, far left, and Khaled Abu Sharek, centre back, staff members from Al Najd, MCC’s local partner, visited Mohamed and his nephews, Yaser Dia Al Attar, bottom left, and Ali Tamim Al Attar, back left. All local COVID-19 protocols were followed in this photo. (Photo courtesy of Al Najd)

Nighttime was the hardest for Mahmoud Alhalimi. With the electricity cut and bombs falling, the hours were dark and loud, as he tried in vain to help his two young children fall asleep.

“They asked me all the time, ‘What are these sounds? Are they coming to our home?’” he says of their time during the bombardment on Gaza in May. “They were very scared, and I tried to play games with them in order to relieve their fear.”

The 11 days were dark. “Bombardments were everywhere, while no place was safe in Gaza; the shelling was everywhere from sky, sea and land,” says Alhalimi, project coordinator at the Near East Council of Churches, which receives support from Mennonite Central Committee (MCC).

“These wars on Gaza are repeated every three to five years, and I am not sure I will survive [the] next war,” says Alhalimi. “We say, ‘No more wars.’ We want to live in peace and to develop our country and enjoy our state in our homeland.”

Like Alhalimi, Mohamed Al-Attar was also sheltering in his home with his wife and three children, who panicked as the bombs fell. They couldn’t leave their home with explosions all around them. Then the unthinkable happened. Their home was hit, and Al-Attar lost his wife and children—Mohamed Izz Eddin, Islam and Ameera—in the blast. Then, while he was staying with his brothers and their families, that house was also hit by a bomb, and they were buried under the rubble for hours.

“We have become refugees in our own country,” Al-Attar says. “Me and many people like me have lost their families, children and parents during this conflict, . . . and even the ones who survived are suffering over the things they have lost. They have no place to be.”

Since the bombardment, Al-Attar has been able to continue in his teaching position, but he is now trying to support his brothers’ families as well. He is trying to stretch his income, but it isn’t enough.

The outbreak of violence followed weeks of growing protest and violence triggered by Israel’s plans to remove Palestinians from their homes in Sheikh Jarrah in East Jerusalem, as well as heavy policing of Palestinians during Ramadan, particularly at the al-Aqsa mosque.

The bombing destroyed or damaged thousands of homes and displaced up to 8,500 people. Access to essential services like clean water and health care have been difficult in Gaza for years. But the conflict, combined with the COVID-19 pandemic, have dramatically worsened the situation.

Many residents in Gaza have very low incomes, so they struggle to buy enough to eat. Gaza has been under a blockade by Israel since 2007, with severe restrictions on what can come in and out. The economic situation in Gaza was already poor at the time of the siege and continued to deteriorate. Many people have no steady income to provide for their families.

MCC is responding to the crisis, providing emergency food, hygiene items and psychosocial support. More than 400 families will receive either monthly food packages or vouchers through MCC’s local partners: Al Najd Development Forum and the Culture and Free Thought Association. More than 200 families will also receive hygiene supplies, and 400 children will receive mental-health support to help them deal with the trauma of the experience.

The Near East Council of Churches, which runs a vocational training school, will provide psychosocial counselling support for students and their families, and one-time emergency cash distributions for families to purchase food and hygiene items, and to cover other medical or household expenses. 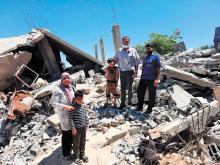 Mohamed Al-Attar, at right in blue, lost his wife, children and his home during the violence in Gaza in May. Rifqa Hamalwai, far left, and Khaled Abu Sharek, centre back, staff members from Al Najd, MCC’s local partner, visited Mohamed and his nephews, Yaser Dia Al Attar, bottom left, and Ali Tamim Al Attar, back left. All local COVID-19 protocols were followed in this photo. (Photo courtesy of Al Najd) 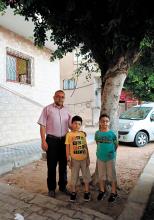 Mahmoud Alhalimi, and sons Kareem, centre, and Anas, right, are pictured in front of their still-standing house. (Photo by Sanabel Alhalimi) 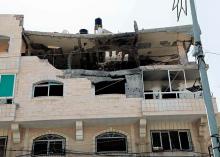 A Gazan home that was destroyed during the bombardment. (Photo courtesy of Near East Council of Churches)