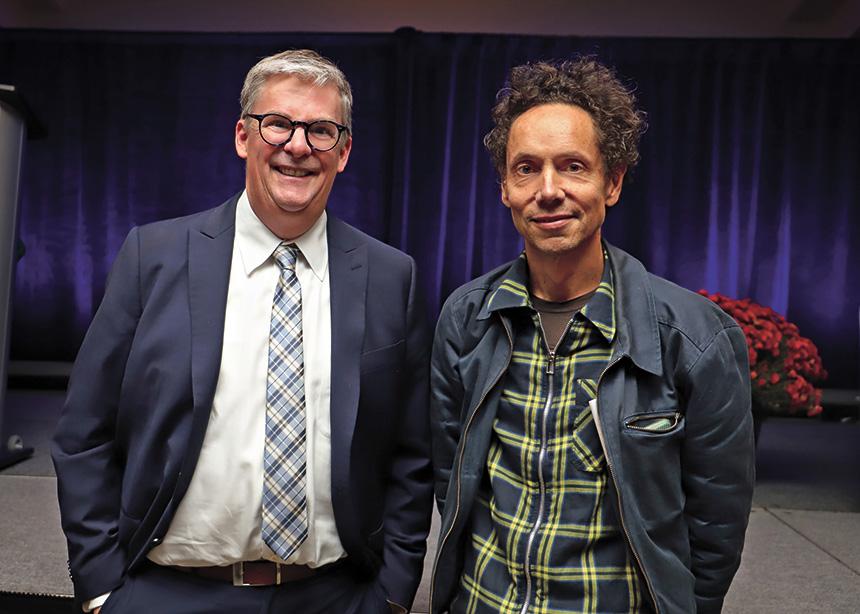 Malcolm Gladwell, a widely acclaimed writer and podcaster, drew a crowd of 650 people to a fundraising dinner hosted by Mennonite Central Committee (MCC) Ontario on Oct. 27 at Bingeman’s in Kitchener. As is his style, Gladwell wove together interesting stories, while the audience wondered about the connections between them. But the strands came together in the end as he reinforced the evening’s theme: “The power of partnerships.”

The event was originally planned for 2020 to coincide with MCC’s 100th anniversary but was postponed due to the pandemic.

Gladwell began by telling the story of two extraordinary acts of generosity. Henry Rowan, an engineer living in New Jersey, built a company that became the largest furnace factory in the world. When he was approached by Glassboro State College to support the struggling school, he was not enthusiastic.

“We don’t need schools, we need engineers!” said Rowan. After further conversation, in 1992, Rowan gave $100 million so that Glassboro could build an engineering school where tuition would be reasonable. Rowan was the first person to write such a large cheque for a private school, beginning a wave of big-dollar philanthropy.

The second act of generosity was by John Paulson, a hedge-fund manager who made a fortune betting against sub-prime mortgages. A few years ago, he gave $400 million to Harvard for the John Paulson School of Engineering.

“One donor gave to a small school, the other to Harvard. Who made better use of their money?” asked Gladwell.

Another story was a sports analogy, comparing soccer and basketball. To improve a soccer team, statisticians have determined that it is better to replace the weakest player with a stronger one. As an interactive sport, soccer is only as good as its weakest link. Basketball teams, on the other hand, can get by with a weaker player. The Chicago Bulls in the mid-1990s and the Golden State Warriors of five years ago were championship teams that depended on only three exceptional players. Basketball is a strong link sport.

In life, is it better to strengthen the weakest links or the strongest? Gladwell described Paulson as a strong-link person who gave his money to the best university. Rowan, who depends on people all over the world to make his company work and sees everything as interconnected, tries to improve the weak links.

Modern medicine is also only as strong as its weakest link, said Gladwell. While studies show that there is a strong relationship between the success of a surgeon and number of surgeries he has performed, it does not hold if the surgeon goes to another hospital. The expertise of the team around the surgeon is important to his success.

Asking what Jesus meant when he said, “The first will be last and the last will be first,” Gladwell said it is how people treat the last that matters. “We go further as a society when we build up a small university, not Harvard.”

Gladwell concluded by saying that “the Mennonite community is a community devoted to weak links.” He challenged the audience to carry the message that building a better community requires teamwork. “We are not playing basketball, we are playing soccer,” he said.

The evening also included some short videos about MCC’s work over the past 100 years, and the news that two containers of relief supplies were recently shipped to Ukraine via the Netherlands. Adding to the funds raised was a silent auction and a direct appeal for donations. While the total has not yet been finalized, the evening raised more than $100,000. 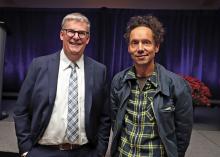