This year, Mennonite Central Committee (MCC) is celebrating 75 years of relief, development and peace work in India, making it one of the oldest international aid organizations in the country.

MCC began work in India in 1942, in response to severe famine in Bengal province in which more than two million people died from starvation, malaria and other related diseases. Over the years, MCC has responded to many other disasters and, through local partners, addressed systemic issues including poverty, conflict, and gender inequity.

According to Gordon Zook, who works as an MCC representative in India alongside his wife Carol, a well-attended anniversary celebration in February proved MCC’s presence in the country has touched many lives.

“One of the key highlights are the individual lives that are being changed through educational sponsorships, YAMEN (Young Anabaptist Mennonite Exchange Network), IVEP (International Volunteer Exchange Program), and people who are participants in projects,” he said.

The keynote speaker for the two-day 75th anniversary celebration was Dr. John Oommen, who has seen these changes first-hand and is actively participating in bringing about these changes. He and his wife Mercy are administrators at Bissamcuttack Christian Hospital in Odisha, with whom MCC partners to educate nursing students and midwives from low-income families.

“Not only MCC, but all of us, are part of a larger mission. Like a jigsaw puzzle. We all think we own the picture rather than just fitting into the hole cut out for our piece and making the picture that much more beautiful,” he said at the celebration in Kolkata. “Our calling, our mission, is to share the suffering and pain of people. This is the example of Jesus.”

Among the guests was one former MCC service worker whose connections to MCC in India dates back more than 50 years. Bert Lobe of St. Jacobs, Ont., began serving with MCC in India in 1966 in Palamau district, Bihar, and stayed there until 1969. He then worked in Kolkata from 1977 to ’80 and from 2013 to ’14. “Our years in this great country . . . captured our imagination and changed us forever,” he said. “We remember these years in India with deep gratitude.”

According to the Zooks, while much has been done to touch lives and build hope in India, there is still work to be done.

“While the headlines say India is one of the fastest growing economies in the world, the scale of the population here means that any problem affects a huge number of people,” Gordon said.

Carol said there is such a contrast between the wealthy and the poor. “While most people have cell phones in the cities, and even in the countryside,” she said, “there are still rural villages without toilets and water.”

The Zooks said they hope to approach MCC’s future work in India through a lens of conflict transformation. “For example, an irrigation project that brings water into communities also brings conflict into those communities because now there’s a resource to fight over,” Gordon said. “We want to focus on equipping people to resolve conflicts.” 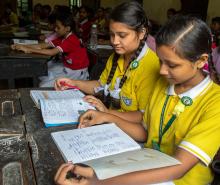 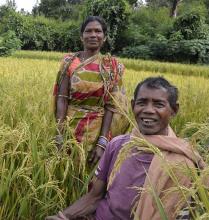 Maheshwar Pujari, pictured with his wife Shakuntala Pujari of Sinisingi village in India’s Orissa region, has seen an increase in rice yields now that he follows the system of rice intensification method of rice cultivation, and after a diversion-based irrigation system was installed in his village in 2013. (MCC photo by Pabitra Paramanya)

Children aged three to five attend an MCC-supported preschool in Andulgaria village, India, in a child-friendly environment to prepare them for primary school in the formal education system. (MCC photo by Dave Klassen)