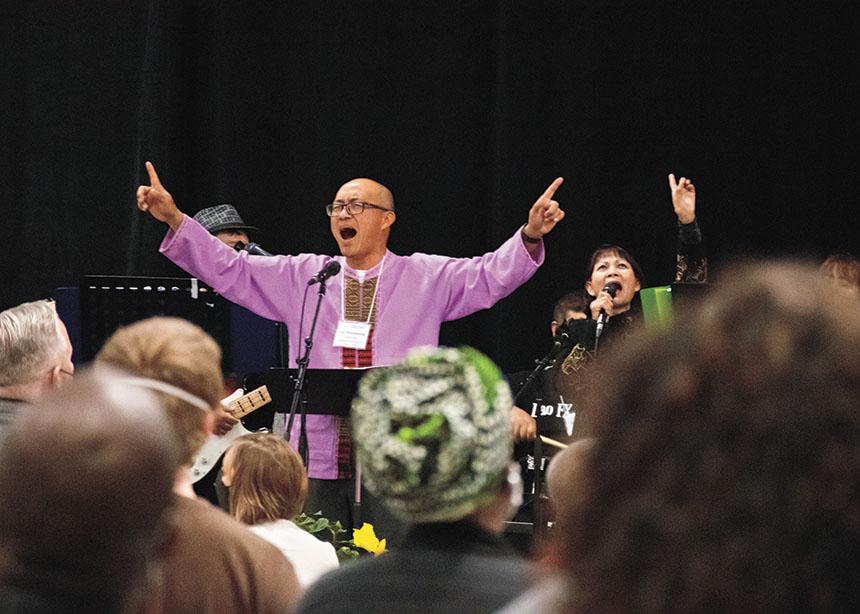 Pastor Yoel Trakoon Masyawong and a group from the Lao Mennonite Fellowship Canada led the gathering in music. (MCEC photo by Luke Fillion)

“Yes, we all lost sound at the Great Commission.” That humorous comment by Cathrin van Sintern-Dick appeared in the Zoom chat of the first hybrid annual church gathering of Mennonite Church Eastern Canada, held April 29 and 30.

Van Sintern-Dick, who serves as a regional ministry associate with MC Eastern Canada, was helping with communication between the attendees on the video conferencing app and the ones taking part in the in-person meeting at Redeemer University in Ancaster, Ont.

Connected with the Parable of the Mustard Seed in Luke 13, the theme “Courageous Imagination: Living into the Journey” appeared throughout the sessions.

“I encourage all of us to look for seeds of God’s healing and hope among us,” urged moderator Arli Klassen, who took part from her home via Zoom.

Guest speaker Jeanette Hanson, who serves as director of International Witness for MC Canada, told stories of Mennonites living out “seeds of faith” in Thailand, South Korea, Colombia and Canada.

In her message to the gathering, MC Eastern Canada executive minister Leah Reesor-Keller said: “I believe the key to leading the church during this time is growing our capacity to dream and imagine other ways of being, imagining new ways of living into God’s shalom.”

She acknowledged that, over the past few years, change has been a constant, not a choice. She asked, “Rooted in Christ, our foundation, and strengthened by our history and relationships, how do we create and dream new ways of being church to each other and to our rapidly changing world?

“Just like prayer and scripture reading, ‘courageous imagination’ is a holy practice that we need to cultivate as individuals, as congregations, as a regional church together,” she said. “How could things be different than they are? Who is God calling us to be and what does that require of us?”

The theme of “courageous imagination” saw expression in MC Eastern Canada’s new “Identity and Purpose Statement,” brought to the delegates for “discernment and approval.” This document resulted from a months-long process that included open meetings throughout the regional church, discussion of document drafts, inspirational podcasts and social media posts.

Participants broke into table groups for discussion, and their reports were summarized for the large group. A time of open mic offered opportunity for affirmations and questions from the floor and via chat and on screen.

Responding to some concerns expressed, Reesor-Keller encouraged love for each other and an embrace of the diversity in theological perspectives present throughout the regional church. “We have some wrestling to do,” she said, acknowledging that it might not be easy or comfortable. “But it’s something we must wrestle with as a community.”

Delegates approved the document with the recognition that the priorities outlined there would help guide the regional church for the next five years. The next step is for staff and the executive council to develop specific goals, strategies and structures that guide future action.

“These are big ideas, and they will shape who we are [as a regional church] and what we will do,” said Klassen.

Another formality was the recognition of 25 new pastors who had been installed within the past two years. These leaders signed covenant documents and the assembly offered prayers for their ministry.

Sean East, MC Eastern Canada’s financial manager, reported on the regional church’s finances. Giving by individuals was up $20,000 from the previous year, as was giving by congregations. The budgeted deficit was less than expected and was covered with planned transfers from restricted funds.

Although delegates had just accepted the new priorities statement, the 2022-23 budget is based on last year’s figures, with an eye toward “a new reality” that will come as specific strategies are developed. East stated that MC Eastern Canada is in a strong financial position for the immediate future, with flexibility to react to changing circumstances. (For a financial picture of all the regional churches, see “Individual donations trend up within regional churches").

“Embracing diversity” was named as one of the priorities for the regional church’s next five years, and that was evident in various ways throughout the meetings. Participants could access simultaneous translation into French, and the Lao Mennonite Fellowship of Canada, a group of four Ontario congregations, provided music for the worship times, with songs in English, Lao and Chin.

Janice Monture, a local Indigenous leader, led the gathering in a time of gratitude for creation and the Creator, and she offered advice on how congregations might develop and use land acknowledgements in their own settings.

Above: Highlights of the event.

This article appears in the May 30, 2022 print issue, with the headline “Taking steps in ‘courageous imagination.’” 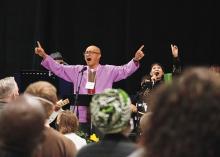 Pastor Yoel Trakoon Masyawong and a group from the Lao Mennonite Fellowship Canada led the gathering in music. (MCEC photo by Luke Fillion) 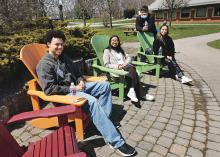 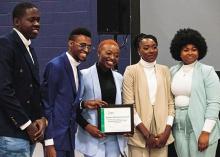 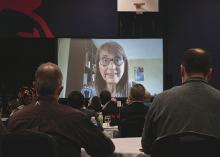 Moderator Arli Klassen greets participants of the MC Eastern Canada’s hybrid annual gathering. She and dozens of others attended via Zoom. (MCEC photo by Luke Fillion)