MC Canada wants to know who is caring for refugees 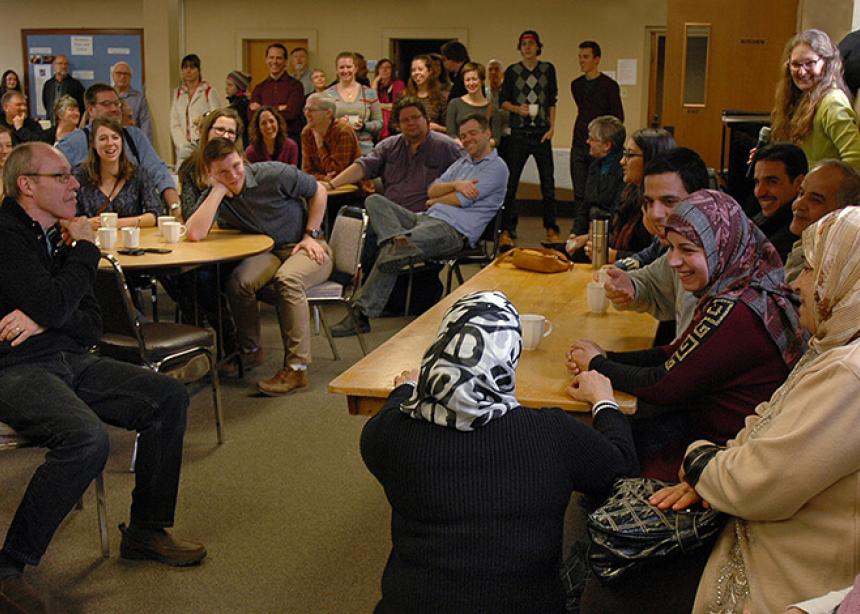 Mennonite Church Canada congregations are taking the words of Deuteronomy 10:18-19 to heart by caring for Syrian refugees. The  passage shares God’s desire to clothe and feed strangers. It’s a rather fitting way for Mennonites to express God’s love, as many were once refugees to Canada themselves.

Foothills Mennonite Church in Calgary is one of  the congregations involved. Lead pastor Doug Klassen says that sponsoring refugees has been part of his congregation’s ministry for years. “We have sponsored refugees from Vietnam, Eastern Europe, Colombia, and when [Mennonite Central Committee (MCC)] Alberta asked us if we were going to sponsor refugees from Syria [and] Iraq, we said we would gladly do it.”

Every year, the congregation designates $6,000 from its budget towards a refugee sponsorship fund. When enough funds are accumulated to meet government recommendations for family support, the process begins.

“Over the years, we have also gone halves with other churches in the area, sharing costs and responsibilities,” Klassen says.

Tallying up the number of congregations supporting Syrian refugees—or even identifying the congregations involved—is no easy task. Like Foothills, some congregations sponsor refugees directly, but others pool their resources and work together or send donations to organizations that specialize in resettlement.

Ryan Siemens, area church minister for MC Saskatchewan, reports that 17 of its 31 congregations are currently sponsoring refugees in one way or another. “Some churches are sponsoring on their own,” he says. “One church is doing a family re-unification and another church has two families coming in at once. A lot of refugee support [is coming] from a small scattering of churches.”

He emphasizes the need for churches to work together to serve the community, and points to Grace Mennonite Church in Regina as an example. In the fall of 2015, the congregation invited other MC Saskatchewan churches to join it in refugee sponsorship. Several small rural congregations responded to that call.

He also notes that MCC Saskatchewan received some significant donations from churches that felt they didn’t have enough personnel to sponsor refugees, but wanted to help.

If you or your congregation is responding to the refugee crisis in Syria or another area—whether through direct sponsorship or fundraising—please let MC Canada know by contacting Deborah Froese, director of news services, at dfroese@mennonitechurch.ca.

I would like to know if there are any local churches in Gatineau, QC. I did a web search and did not find anything in Gatineau. I know there are Mennonite churches in Ottawa but would prefer to find one in Gatineau area, as I am a senior and do not like the traffic. I am interested in knowing your church and also helping in refugee situations. Thank you.

The Mennonite churches in Ottawa would be the closest to Gatineau. If you want to find ways to help support refugees, we suggest you contact Mennonite Central Committee, an organization that works with partners around the world, helping refugees and other vulnerable people. See https://mcccanada.ca/ —Web editor