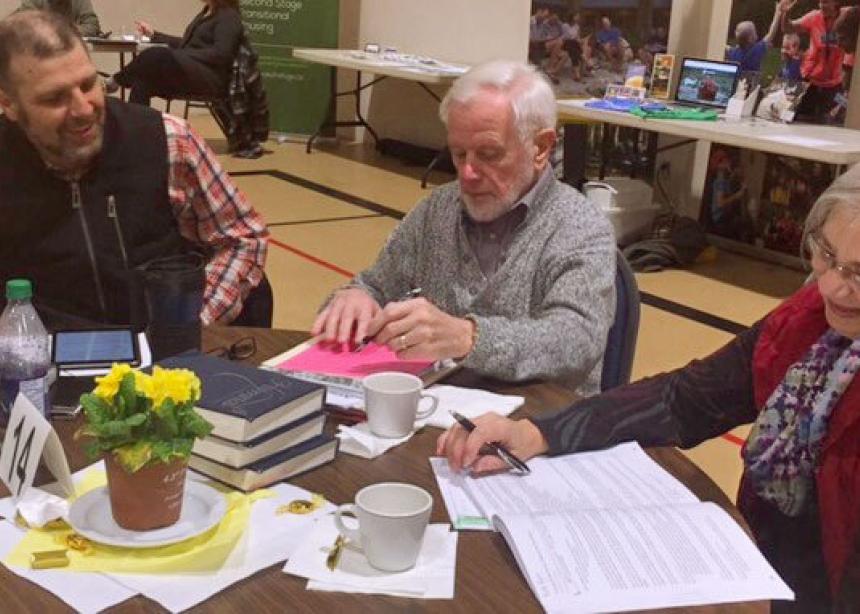 Despite meeting under the theme of “Building healthy connections,” many delegates who gathered for Mennonite Church British Columbia’s annual general meeting on Feb. 25, 2017, wondered how the future might look for their connections as an area church family when the day was done.

The meeting at Emmanuel Mennonite Church in Abbotsford was the third gathering in four months at which potentially divisive issues surrounding the Being a Faithful Church (BFC) 7 resolution were on the agenda, putting the future unity of MC B.C. in uncertainty.

In an opening statement, executive minister Garry Janzen said, “We have come to see the best in each other. We may hope to find one statement we can all say ‘yes’ to. Let us listen rather than talk over each other. We may come to hope that the church bigger than ourselves would thrive. Real life happens in local congregations. There is a difference between ‘this is how I stand’ and ‘this is how I love.’ ”

Generating much discussion were two resolutions (see sidebar below), both dealing with the implications of BFC 7 for the area church.

Resolution 1 affirmed the MC B.C covenant signed on May 27, 2007, and reaffirmed that, in accordance with the Confession of Faith in a Mennonite Perspective, “pastors within MC B.C.  will not officiate at same-sex weddings and that MC B.C. congregations will not appoint pastors who are in a same-sex relationship.”

Speaking in favour of the amendment, Frank Berto of Living Hope Christian Fellowship in Surrey said, “BFC 7 and the covenant would seem to be incompatible.” On the other side, George Goertzen of Peace Mennonite Church in Richmond said, “One of the things I find troubling is language. It feels like MC Canada is set up like a separate church entity. I thought it was ‘us.’”

Delegates chose to deal with each separately and defeated the amendment by a vote of 71-46. Discussion then turned to the original Resolution 1.

Alf Penner of Eden Mennonite Church in Chilliwack said, “I trust all of you to follow Jesus. I trust you are compelled by love of Christ to love everyone as Jesus loved us. Can we agree to trust one another that we are motivated by love of God? If one congregation disagrees with one another, that is okay.”

David Friesen of Emmanuel Mennonite proposed an amendment that the words “and those in leadership positions” be added to the phrase “will not appoint pastors who are in same-sex relationships.” The amendment was accepted and the amended Resolution 1 passed by a vote of 105-52.

Later, the delegate body dealt with Resolution 2, presented by Artur Bergen, pastor of Eben-Ezer Mennonite. Phil Wheaton of Bethel Mennonite Church in Langley asked for clarity. “Can Article 19 [of the Confession of Faith, stating marriage is between one man and one woman for life] be interpreted by individual congregations and pastors? Is BFC 7 included in this motion?”

Garry Janzen responded: “It could be viewed in two ways: as a replacement of, or an implementation of, BFC 7. . . . Beyond that, it becomes a pastoral matter in a congregation’s experience. I’m okay with both these understandings.”

Walter Bergen of Emmanuel Mennonite, who drafted Resolution 2, explained: “We [those who drafted the resolution] wanted to create formal unity and invite out of that a conversation with MC Canada. We are in discord with MC B.C. and MC Canada. We have not in this resolution made any suggestions on action. If you do not like this, recognize it is the very best we could do. If this resolution is not passed, it will be viewed by many of us as a repudiation of us seeking common ground.”

Walter Paetkau of Langley Mennonite Fellowship wondered, “Is there a threat to leave MC B.C. depending on the vote?”

Replied Walter Bergen, “There is no threat implied. We were simply asking to address the fact that we are in discord.”

After much discussion, Resolution 2 was defeated by the narrowest of margins: 69-68.

Also on the agenda

Delegates heard an update on the plans for the former Clearbrook Mennonite Church property and held roundtable discussions on the implementation of the Future Directions recommendations by MC Canada. They also approved motions to:

For background, see:
MC B.C. divided on BFC7
Finding a way to be together

• Resolution 1. The MC B.C. resolution for our way forward in response to Being a Faithful Church (BFC) 7: Whereas MC B.C., as a collective body, affirms the MC B.C. covenant, and holds to the Confession of Faith in a Mennonite Perspective, which states that marriage is between one man and one woman for life: Be it resolved that: MC B.C. will continue the existing practice: that pastors within MC B.C. will not officiate at same-sex weddings; that MC B.C. congregations will not appoint pastors and those in leadership positions who are in a same-sex relationship. We, as MC B.C. congregations, encourage one another to continue to walk alongside and share the love of Jesus—as we are able and as our gifts allow—with all people, including those who are same-sex attracted and those who are in same-sex relationships. PASSED (105-52).

• Resolution 2. Whereas MC B.C. congregations did solemnly enter into a relationship of covenant on May 27, 2007; and whereas MC Canada did on July 9, 2016, adopt BFC 7 at the bi-annual assembly in Saskatoon; and whereas these two events, covenant and resolution are incompatible: We do hereby resolve: To affirm again the primacy of the MC B.C. covenant and the Confession of Faith for MC B.C. congregations; and to recognize that by the adoption of BFC 7, delegates voted to distance MC Canada from the intent and purpose of the MC B.C. covenant, resulting in a relationship of discord. It is with regret that we do recognize that MC Canada has entered into an impaired relationship with MC B.C., and with the adoption of this resolution we recognize the discord MC Canada has invoked. DEFEATED (69-68).

As with all decisions taken in haste, the ones taken at the AGM have had unintended consequences. Amending motions on the floor is never a good idea, especially when they are so convoluted and so full of subordinate clauses as to be unintelligible, so that most people vote either for or against them out of pure emotion, and not based on any understanding of the issue or solution. The Conference badly needs a full-time parliamentarian, one whose job is to advise that every resolution that comes to the floor should be stated in twenty words or fewer. Nonsense resolutions like the ones passed at the AGM attempt to be all things to all people, pretending to implement a divisive collective decision with a caring face that does not match the intent.

Resolution #1, as a conference-sponsored resolution, rejects the BFC process entirely, beginning with BFC1, 2 and 4, by instructing congregations not to act out of congregational wisdom, but by conference fiat. Doing so throws in God’s face His work of leading and changing the church through the discernment of its members as guided by the Spirit. (BFC1). It dismisses the point of BFC 2 and the practice of BFC 4 by elevating the Confession of Faith above the manifold voices in Scripture, and denies the need to test other voices within and beyond Scripture.

Where is the trust that each congregation is owed to discern for itself the leading of the Spirit? When will my fellow congregations trust ours to check with them before we take any radical steps to change the traditional meanings of the texts we hold so dear?

At my table at the first discernment meeting in November 2016, sat a pastor and a congregational chair, both of whom had the audacity to say to the table that they and their congregations did not participate in the BFC process “because we knew where it would lead.” This is the trust we were extended. This is the relationship we were granted. And now it has been fulfilled in the passage of a resolution that insists their interpretation of Scripture be valued over any discernment that might not conform to their beliefs about the interpretation of scripture. Let us not forget, all Scripture is indeed interpreted--by Scripture itself.

Our congregation has shown no signs of unfaithfulness. Our fellowship has not sought to marry others outside the traditional understanding. But we have had our discernment unilaterally taken from us by a sudden and unthinking decision of a majority of people who have clearly not considered the implications of their decision--nay, they headed straight into several of the ditches so thoroughly taught about in BFC 4, had they attended any sessions.

And this decision has harmed us. Our congregation is a lay-led one. Each person who attends regularly--whether member or no--has some position of leadership and responsibility. Few are exempted, and fewer desire to be. Whether leading worship or music, preaching, home or teaching ministry, or congregational care, hospitality, or relations with other ministries and mission--great numbers of our congregation exercise our individual discernments and leadership skills in beneficent ways to the good of all. With considerable effort, we have managed to govern ourselves by consensus, accountability and good order for more than two decades.

But our care for each other is a precarious one. None of us has the shield of pastoral authority, of ministerial accountability, nor does anyone pretend to exercise it. When there is need for pastoral counselling, appropriate care is found and paid for. When guidance and preparation of our members for the trials of their lives tax our personal resources, we call upon professional resources available to our Christian community to assist us. And we preserve the anonymity of our members at all times.

This resolution asks us to breach that anonymity with an assumption of a pastoral authority that is not ours to own. To require any of us in the congregation to inquire of any one of our members or attenders who exercise leadership in any form after their sexuality or relationships breaches not only our personal trust for one another, but also assumes a pastoral authority that is not ours, and does so without accountability for the results.

A conference that sees members railing against the”slippery slope” in other situations seems entirely too comfortable heading down this slope itself. If we are told "from above" what to think and believe and how to act in matters of human sexuality, how long before we are told more reprehensible things--that separated and divorced people may not find succor with us; that sexuality outside of marriage is grounds for exclusion; that we must participate in warfare and support responsibility to protect; that our aboriginal brothers and sisters have received enough of our efforts and resources; that we must privilege the wealthy over those in poverty?

I call on the Conference to rescind this resolution at the earliest opportunity before it does the unthinkable--drives one of its faithful members out of the conference by mistake.