Either way, ‘the only visible sign of God in the world is the cross’ 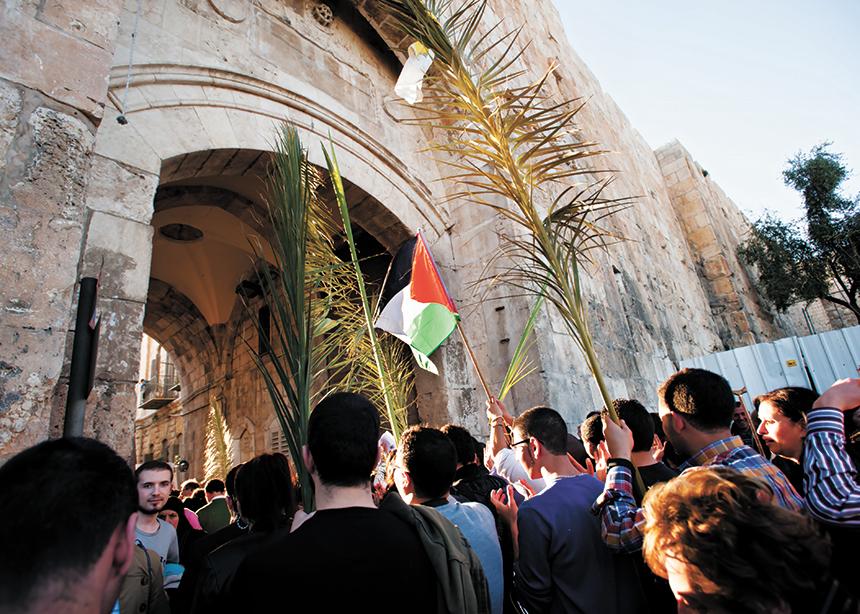 Christian pilgrims wave palm branches as they enter the Lions’ Gate of the Old City of Jerusalem in the annual Palm Sunday procession, March 24, 2013. (Photo © istock.com/rrodrickbeller)

Soren Kierkegaard once famously said, “Life can only be understood backwards; but it must be lived forwards.”

So often it’s only after we’ve lived through something that we can look back and articulate what was going on; then we see the choices we made more clearly and understand better the way things unfolded. We could hear this quote as an affirmation that it seems we’re often destined to go through life without a road map. Now “through a glass darkly,” but only in some unforeseeable future “face-to-face.”

I’m quite certain that Kierkegaard, being the philosopher that he was, wrote volumes of commentary behind that simple quote. And because he was a Christian theologian, I also suspect that he knew very well that God doesn’t actually work in straight lines—from past to present, or present to past, from here to there, from point A to point B.

The time from Palm Sunday to Easter is a week full of future infiltrations and past reverberations—a rather topsy-turvy timeline—which is what happens to time when God gets a hold of it. We can’t help but enter Holy Week knowing what’s coming.

Even the first hearers of Luke’s Gospel, listening to the story of Jesus’ procession on a colt into Jerusalem, only heard it post-Easter. Harry Maier, a professor of New Testament at the Vancouver School of Theology, teaches that the gospel is always about Easter, and the historical Jesus in the gospels is only there because of Easter.

But let’s not rush ahead just yet. We are here, in this “today” fraught with whatever today brings for each of us, with a confession on our lips similar to the confession made by the crowd in Luke’s story. That cry echoes from even further back in time, when Psalm 118 gave word to the song of praise and expectation: “Blessed is the one who comes in the name of the Lord!” We wave our palm branches for this victory parade, knowing that it is actually a funeral procession. Or is it the other way around?

But even Kierkegaard can’t pull one over on the Creator of the universe. In God’s time, the future doesn’t only defragment the present, but the past also has a way of breaking out of the prison of bygones and showing up unannounced.

Passages from Psalm 118, Zechariah 9, Habakkuk 2 and others all linger in the air as Luke tells the story. Every allusion to the larger arc of God’s movement in the world layers meaning upon meaning.

Luke, quite intentionally, narrates the events leading up to Jesus’ crucifixion, pulling on threads known to his listeners from their own sacred scripture. Drawing from the past to help interpret the present, the early community of Jewish Jesus-followers couldn’t miss what was being proclaimed: this Jesus of Nazareth isn’t just any ordinary Jew, but is the One anticipated since the psalmist sang and the prophets prophesied.

Blessed is the One who comes in the name of the Lord! God’s steadfast love endures forever!

As Jesus enters Jerusalem on a colt, Zechariah’s depiction of the same scene brings to mind a vision of a pre-monarchical time, when kingship is God’s alone, and leadership comes from the people. Jesus, too, proclaimed the kingdom of God, an offence to every earthly empire, a declaration that gave the Romans every excuse they needed to execute him.

“Blessed is the One who comes in the name of the Lord!” the people cry with unbridled hope and expectation (with the implicit side whisper: “rather than in the name of Caesar!”).

And so, perhaps afraid that this clear show of counter-imperial praise might raise the ire of the Roman military, who are all over the city on this Jewish festival, some fearful yet realistic Pharisees in the crowd say to Jesus, “Order your disciples to be silent!”

Like many of us, they know that expectant joy can be risky. Who can guarantee that things will turn out the way we have planned? Why raise the expectation of the crowds? Why provoke the anger of those in control who know that hope can be the most dangerous of all powers?

Jesus flatly rejects this plea, saying: “If these were silent, the stones would shout out!” His retort echoes Habakkuk, the seventh-century prophet, who similarly invokes the voices of stones. “Woe to those who build a city with bloodshed and establish a town by injustice!” Habakkuk warned. “The stones of the wall will cry out” (Habakkuk 2:11-12).

We’ve heard it said that you can get neither blood nor water from a stone, yet here we find that, if push comes to shove, you will hear the cry for justice ring from their hard yet opened lips.

This was no ordinary Jew, and no ordinary entry into Jerusalem on a donkey. Rather, it was a glimmer of past hope and a promise of coming salvation from injustice. Eternity pressed into one moment—this moment, here and now—as we, too, wave our branches and shout our praises, all the more confident knowing that there are talking stones at our feet!

Stones took on new significance for me during the years I spent in the Israeli-occupied Palestinian territories while serving with Christian Peacemaker Teams. Daily, I saw young boys with stones in hand facing off against Israeli soldiers who were holding guns, sound grenades and tear gas. Far too often, I scrambled over the piles of rubble left after Palestinian homes were demolished by the Israeli military because the family had dared to build on their own land without a permit—a permit granted only by the Israeli military, and almost impossible to get. More than once, I took stones in my own hands to clear the land for rebuilding.

It was there that I saw how hearts so easily harden into stone out of fear and despair, and how stones do cry out against silence in the face of injustice. I saw how precious hope and faith are when one is standing at cliff’s edge, and how the “stone that the builders rejected” becomes the “chief cornerstone” in the creation of any livable future. That is another image from Psalm 118 finding its voice anew in Luke’s passion narrative.

On the day after his palm-strewn procession, when Jesus quotes this second stony verse from Psalm 118, he is, of course, referring to his own rejection and vindication. It appears that Jesus is the stone that the builders rejected. But the psalm itself is more ambiguous. The stone could be either an individual person, or it could be the collective people—a distinction often ambiguous in ancient writing. Indeed, even Jesus collectivizes himself when he declares that what we do to the least of those around us, we do to him.

The more the modern Israeli state ignores the plight of the Palestinian people it displaces and destroys, the more their cries shatter the silence and the justice of their pleas demands response. We see it time and again: Indigenous people in Canada, African-Americans in the United States, marginalized populations in civil and religious communities. These are stones that the builders of these institutions and nations reject or marginalize. They will become a chief cornerstone in whatever future will unfold, however the future unfolds.

This is God’s doing, the psalmist sings; it is marvellous in our eyes!

As Dietrich Bonhoeffer, one of the few Christian leaders who stood up against Hitler’s regime in Nazi Germany, wrote in his reflections on Lent and Easter: “That, indeed, is the marvellous—and yet for many people so repulsive—theme of the Bible, that the only visible sign of God in the world is the cross. Christ is not gloriously transported from earth into heaven. He must instead go to the cross. And precisely there, where the cross stands, the resurrection is near. Precisely here, where all lose faith in God, where all despair about the power of God, God is fully there, and Christ is alive and near.”

It is this that makes something holy. Not, as we often imagine, the purity or morality or goodness of it. It is this future that rewrites the present, injecting its refracted light backwards into whatever funeral procession or victory parade we may be travelling on right now. Holiness comes with no guarantees or return policy. There is no assurance that things will turn out the way we long for. There is just the promise—sometimes only a nearly forgotten whisper coming from the horizon into which we fix our gaze—that nothing is lost forever. God’s steadfast love endures.

But if the stones have anything to say about it, silence will never be the last word, because in the brokenness there isn’t just the hope of wholeness, but holiness. As a wise rabbi once said, “There is no heart as whole as a broken heart.”

“Blessed is the One who comes in the name of the Lord!”

1. What does it mean to understand life backwards? What experiences have you lived through that seemed confusing at the time but now can be better understood? If you had been cheering at Jesus’ triumphal entry into Jerusalem, how would you have interpreted the event?

3. The Pharisees were worried about the expectant joy of the crowds at the time of Jesus’ triumphal entry and they tried to suppress it. Are there times when waving palm branches and shouting praise can be risky for us? Do struggles against injustice also have moments of expectant joy?

4. Anita Fast declares that something is holy not because it is pure, moral or good, but because God is there in the midst of despair. Do you agree? Can you think of examples of finding holiness in brokenness? How can we express the hope of the resurrection in the midst of life’s brokenness? 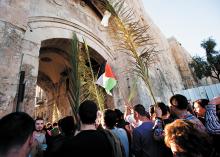 Christian pilgrims wave palm branches as they enter the Lions’ Gate of the Old City of Jerusalem in the annual Palm Sunday procession, March 24, 2013. (Photo © istock.com/rrodrickbeller)