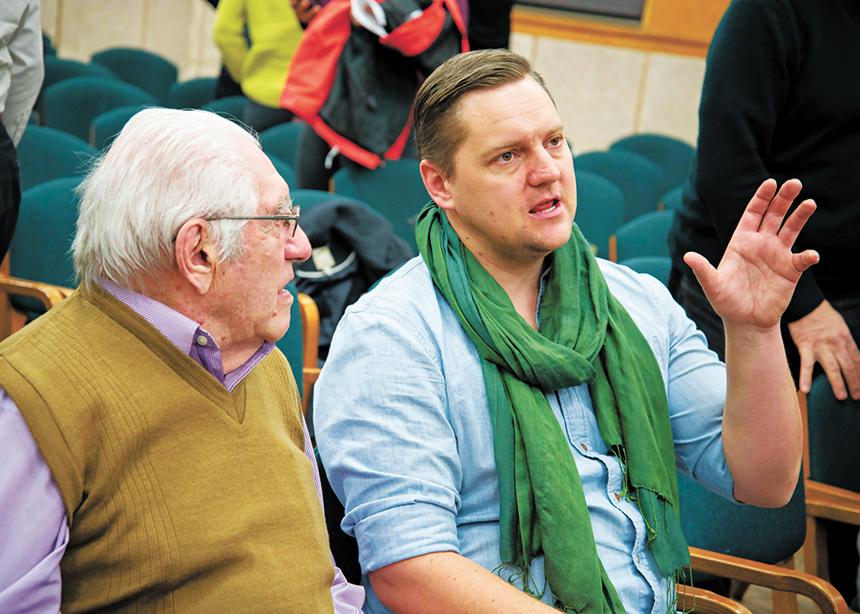 Paul Plett, right, whose documentary Seven Points on Earth was featured at this year’s Bechtel Lectures at Conrad Grebel College, chats with Lester Bechtel, who funds the annual lecture series as a way to make the academic world accessible to a broader audience. (Photo by Jennifer Konkle)

Mennonite farmers have a lot in common. They see themselves as stewards of the land, they live with uncertainties, and they take pride in what they produce, but they farm in dramatically different ways.

At the annual Bechtel Lectures at Conrad Grebel University College, on Jan. 31 and Feb. 1, Mennonite farmers shared their diverse stories of food production.

The lectures this year featured a screening of Paul Plett’s Seven Points on Earth documentary about Mennonite farmers around the world, and a “farmer’s breakfast” with five local food producers as guest panelists.

Plett, of Ode Productions, a socially conscious film company based in Winnipeg, worked with Royden Loewen, a University of Winnipeg professor, who was studying seven Mennonite farming communities around the world. Plett focused on one person in each place.

The documentary summarizes the history of Anabaptist-Mennonite migration patterns to explain how some two million Mennonites are now found in 87 countries around the world. Loewen explains how farming became part of their identity and mythology after Anabaptists were driven out of urban areas by persecution and became “disproportionately rural people.”

The film features farmers from Manitoba, Iowa, Bolivia, the Netherlands, Zimbabwe, Siberia and Indonesia. They raise a variety of crops—from corn to cassava, and goats to ground nuts—using everything from hand tools to combines, highlighting that there are many different ways to farm.

Plett spent several days with each farmer, inviting them to reflect on the highs and lows of their farm operation, how farming was connected to their faith, and how current events and issues were impacting their farm life.

Plett said he was moved by the welcome he received by the farm families, trusting him to share an “intimate portrait” of their lives. In exploring their differences, he said he was not “out to judge people,” but rather to represent them “with dignity and respect.”

An interesting juxtaposition in the film happens when Manitoba farmers Jeremy and Meghan Hildebrandt describe how they don’t specifically pray for rain, trying to rely on faith that “God knows our needs” and he will provide.

In contrast, farmer Hetta Dube from Zimbabwe emphasizes the importance of regularly praying for rain. She says that “water is life. . . . I have prayed and God has answered.”

At the “farmer’s breakfast” on Feb. 1, a diverse panel of five Ontario farmers shared their stories.

Angie Koch, who manages Fertile Ground Farm, an organic Community Supported Agriculture (CSA) enterprise, said that it is important to “connect farmers with eaters” in order to “draw people into their food story.” When her farm “make[s] food meaningful . . . it makes it more delicious.” She said a “colonial view of land ownership” does violence to the land, and she described ways she tries to work with natural ecosystems instead of against them.

Mark Reusser, a turkey producer and vice-president of the Ontario Federation of Agriculture, described the land as a “perpetual resource if you treat it well,” but “non-renewable” if people don’t.

Lloyd Frey, who operates a dairy farm and grain elevator with his family, noted how, in his lifetime, farmers have been able to double their volume of production and feed more people.

Sarah Martin-Mills is the founder of Growing Hope Farm, a volunteer-run, social enterprise growing fresh food that gives hands-on experience to at-risk youth and women prisoners, and donates its profits to Mennonite Central Committee’s food security fund. She sees her farming practices as an expression of her faith and insists that there are creative ways of farming “outside the box” of market economics.

Chris Mullet Koop, a commercial egg producer and grape grower from Jordan, Ont., expressed frustration at the “epidemic” of people who don’t know much about food production but who still judge the process. “We have to tell our story or someone else is going to tell it for us,” he said.

Reusser said that it is troubling “when we use the kinds of food we eat to attack each other.” He suggested that farmers start by setting aside egos and a “doctrine of right farming,” and have conversations with each other.

Koch said it is important to acknowledge that “the way I do it is not the only way to do it.” 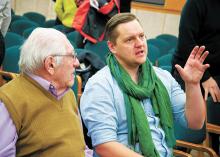 Paul Plett, right, whose documentary Seven Points on Earth was featured at this year’s Bechtel Lectures at Conrad Grebel College, chats with Lester Bechtel, who funds the annual lecture series as a way to make the academic world accessible to a broader audience. (Photo by Jennifer Konkle) 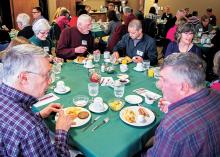 As part of the 2020 Bechtel Lectures in Anabaptist-Mennonite Studies, Conrad Grebel University College hosted a farmers breakfast (pictured) and panel discussion, focusing on the way farming, food, family and faith come together in our various lives. The panelists sparked lively conversation as participants shared their stories and experiences. (Photo by Jennifer Konkle)