The luthier of La Riviere 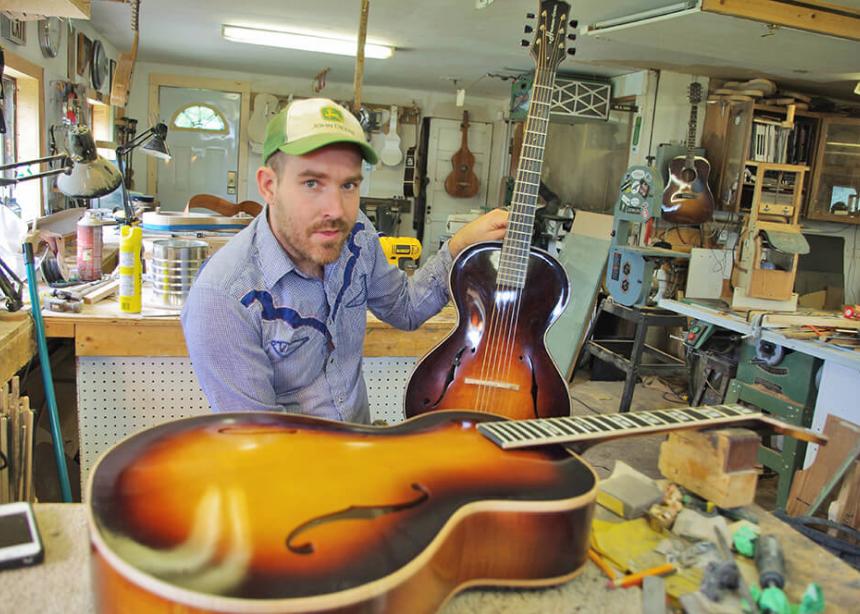 <p>Jeremy Hamm shows off a few of the guitars he has made in his shop. (Photo by J. Neufeld)</p>

Pop psychology writer Malcolm Gladwell popularized the 10,000-hour rule—the notion that it takes 10,000 hours of practice to master a craft. Jeremy Hamm will tell you a different story. He figures it took him at least 25,000 hours of painstaking trial and error before he got good at making guitars.

“I learned by making every mistake you could make,” says the bearded 36-year-old luthier. He talks while he works. Using a pair of needle-nose pliers he slides a bolt through the slender F-hole of a guitar he’s building, then threads it through the top of the guitar’s body where he’ll attach the neck.

“It’s only been about four years now where I’ve felt authoritative enough that I’m happy to grab a fifty-five thousand dollar guitar and rip it apart and put it back together,” Hamm says. “Ten years ago I’d have been very nervous.” Hamm spent a decade repairing guitars in music shops before he started his own guitar-making business. Then he sought out expert luthiers to learn from.

Now he builds his own Hamm-tone brand guitars for Canadian musicians and teaches guitar-building classes in a brightly lit shop attached to his house in La Riviere. “I like to go through history and figure out which instruments failed and which succeeded and why, and then incorporate some of the more modern techniques I’ve learned,” he says.

The guitar he’s working on today is a lovely archtop acoustic. The front and back panels of the guitar are slightly domed to give it a more resonant tone. Hamm carved the soundboard from a slice of Sitka spruce and the back from curly maple using tiny brass finger planes. The carving alone took him 40 hours. Then he applied 34 coats of finish to build up a warm burnished glow that darkens towards the edges.

Hamm says his archtops have clearer frequencies and deliver more harmonic overtones than many other guitars. “If you put this beside a Gibson or a Martin, my guitar’s always a tiny bit louder,” he says.

On the workbench beside him is another guitar, a left-handed flattop he’s is making for Manitoba folk-rocker Del Barber. Barber’s name and a tiny trout are inlaid in mother-of-pearl on the fretboard. Actually, it’s imitation mother-of-pearl since the real stuff comes from mollusk shells and its transport across certain borders is restricted for conservation reasons. Hamm does his best to build guitars that are beautiful and melodious but also ethically sourced. He uses mainly wood from Canadian trees: Sitka spruce, curly maple, cherry, ash, cedar and walnut. “I’m a local person making guitars for a local clientele, and I think a local economy’s the smartest way to go,” he says.

It took Hamm a while to decide to become a luthier. At one point he thought he’d be a youth pastor and then concluded he was “maybe a little too wild.” He also considered a career as an automotive journalist, an engineer or a classical violinist. Ultimately he settled on work that combines his mechanical skills with his musical instincts. He comes by both skills honestly. His father, Nick Hamm, worked as an engineer for John Deere, and his grandfather, John Goertzen, played mandolin in the Lincoln County Peach Pickers, the first bluegrass band recorded in Canada.

Hamm, a musician himself, likes to play the instruments he builds. He’s married to the bluegrass-folk singer Jess Reimer and every summer they tour folk festivals around Canada together with their three children [Watch Reimer and Hamm perform together: https://www.youtube.com/watch?v=2egpO621Brw ]. Hamm, Reimer and their three children attend Pembina Fellowship, a house church that’s part of Mennonite Church Canada.

Hamm teaches two five-week acoustic guitar building courses and two three-week electric guitar-building courses every year at his home. Even though he doesn’t advertise, he gets students from as far away as Thailand and Germany. Last fall one of his students was a private investigator with New York City police department. “He was tired of being a cop and he wanted to be a guitar maker,” Hamm says.

“It’s a wonderful thing to be able to do something you love,” Hamm says. He makes enough money to pay the bills, but isn’t interested in getting rich. Although he could sell likely his guitars for more money in high-end music stores, he prefers to keep them affordable for working musicians, many of whom are his friends. “I’m sort of an anti-capitalist that way. I’m not doing it for the money, that’s for sure. If I was doing something for the money I’d be a car salesman or something.”

Jeremy Hamm shows off a few of the guitars he has made in his shop. (Photo by J. Neufeld)

From reading this article, I think "The Cream has risen to the top" here with Jeremy ! Seldom do you find someone with such dedication, work ethic, values and passion as he shows in his work and toward his fellow musicians.