In 2014, five years after Warden Woods Mennonite Church in Toronto closed, a new congregation began to form in the Warden Woods community. Led by Jordan Thoms, the Warden Underground is focussed on 15-to 30-year-olds. This is an age group which seems to be missed by the Warden Woods Community Centre programs, an age group whose opportunities for entering a criminal life are great, according to Thoms. And he should know, he grew up in the community.

Having become a Christian in his young adulthood, Thoms was training at George Brown College in Toronto to work with children and youth. But he began to feel a call to have an active church in the under-resourced community. He didn’t know if he would just be an instigator or whether he would be a pastor.

He looked into the space at the Community Centre and found that Mennonite Church Eastern Canada owned it. That led him to Brian Bauman, the regional church’s mission minister. Bauman encouraged Thoms to plant a Mennonite church in the community and he offered support.

Some of that support came through Colin McCartney, who runs Connect Ministries, which bills itself as “empowering and equipping young Christian leaders to do what God is calling them to do,” and is on the MC Eastern Canada staff. McCartney asked Thoms, “What’s on your heart?” to which Thoms replied, “Ministry in community.”

The Community Centre has a 49-year lease on the building, but the regional church can use space in coordination with the Centre for 20 hours a week. Thoms says the congregation often uses evenings when the Centre is closed. On Thursday nights, 15 to 20 people meet for worship.

The congregation also offers Jobs for Life, a 12-to-16-week course to train and equip people to find jobs or better jobs. So far, the program has been 100 percent effective.

A third area of ministry is close to Thoms’s heart. The congregation offers arts classes in dance and rap music. A rapper himself, using his skills in the congregation and community, Thoms says that the church brings in a dance teacher and offers instruction in rap music writing, performing and producing skills.

Thoms gets paid for about half-time work by MC Eastern Canada, and he has one assistant working with him. To cover family expenses—he’s married to Keisha, whom he has known since Grade 2, and together they have Azariah, 1—he works with a cleaning subcontractor. Finding a work/family balance is a concern for them.

The congregation is really like a big family. Several of the youth told Thoms first about their acceptance into university. He says he hopes the church will become “a vibrant, safe and loving community that is in a constant place of living out their spirituality and learning about God and Jesus, sharing their lives and journey, being discipled.”

He works on getting “folk to see who God created them to be and become more who God created them to be.” The past year has been the most difficult so far. As the youth grow up, relationships develop and break down, resulting in community tensions. And youth try things out, not necessarily for the best. But he and the congregation continue to walk alongside those people, to get through difficult times.

Warden is one of the smaller social housing communities in Toronto, so it is a close-knit community, says Thoms. It has always been open to spirituality. And with him coming from the community, and a known quantity, people have seen him before his encounter with Christ and after, and have seen his lifestyle changes. “To live a life with integrity leads others giving what you believe a chance,” he says.

Thoms invites prayer for himself, his family, the Warden Underground congregation and for the community where they are at home. 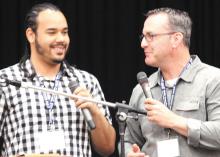