Loss that cannot be counted 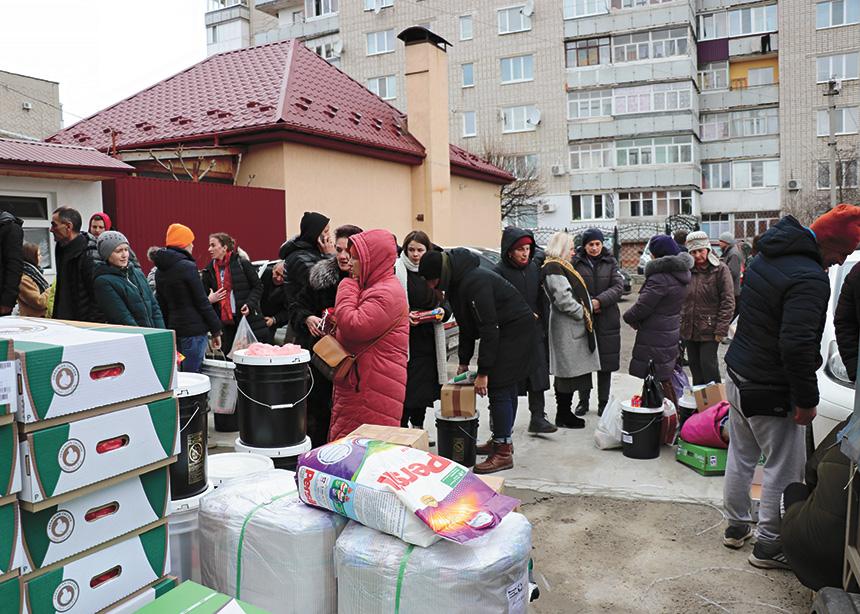 MCC partner Charitable Foundation Uman Help Center sets up a distribution event every week for food, hygiene supplies and other basic essentials for those living in or passing through Uman, Ukraine. (Photo courtesy of UMAN)

As millions of civilians continue to flee the devastation of the Russian military invasion of Ukraine, organizations like MCC partner UMAN (Charitable Foundation Uman Help Center) are working to support those who have left everything they know behind.

UMAN operates in the Ukrainian city of Uman, about 200 kilometres from the capital of Kyiv. Due to its centrality within the country, it has been a major hub for the mass movement of displaced people. Hundreds of thousands of people pass through, some stopping for a night or two on their way to the west, and many others choosing to stay.

Dima Krotik, founder and director of UMAN, says that around 100,000 displaced people have resettled in the Cherkasy oblast (province) surrounding Uman, itself a city of only 80,000 before the invasion. He says the needs are great and the supply is limited.

“Since the first week [of the war], we’ve been organizing distribution events for these people, where we distribute food and other basic items,” he says. “The supply chain for food has been inconsistent, but it’s improving. We still had a container with comforters and hygiene kits left in it, so we’ve been distributing those as well. MCC responded very quickly by providing some funds, so we were able to be effective very quickly.”

Before the war, UMAN primarily worked with people with very little or no income, but Krotik says that now he hears countless testimonies of people who have lost their otherwise comfortable lives in a flash.

“People are sharing with me that just a couple of days ago, they had everything—a house, a car, jobs,” he says. “Or they might get into the city in a very nice car but have nothing else but the clothes on their backs, and now they are coming to us for food and second-hand clothes. They’re not fleeing poverty, they’re fleeing war.”

He says he has heard a lot of very difficult stories over the last few months, but one family in particular has not left his thoughts: “There was a family from Poposna, which has been completely destroyed. They have nothing to go back to. The family has many children. They asked us if we could house them because they have nowhere to go back to. The mother, she was pregnant and quite long-term, seven or eight months. And because of the stressful situation, the child died in her womb. We were able to find a house for them in a village near Uman, but we don’t know if they’ll stay here once the war is over.”

For those trying to survive under such taxing conditions, hope can feel like an exhausted resource.

But Krotik, who also pastors a local church, says a very important part of the work UMAN is doing is offering counselling and spiritual care. “We talk and listen and pray with people, we invite them to our church and into our small groups,” he says. UMAN also offers Scripture verses about anxiety and living in fearful times. “Encouragement is very helpful, so people don’t fall into despair.”

MCC’s response to the crisis in Ukraine is ongoing and includes supplying food, cash, shelter, medicine and hygiene supplies through its partners. Since the beginning of the invasion, MCC has allocated $1.8 million for its initial humanitarian response. 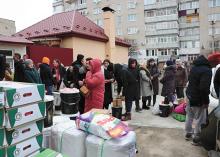 MCC partner Charitable Foundation Uman Help Center sets up a distribution event every week for food, hygiene supplies and other basic essentials for those living in or passing through Uman, Ukraine. (Photo courtesy of UMAN) 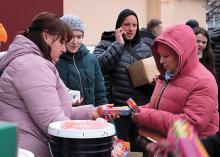 More than 100,000 people have fled to the area around the city of Uman in Ukraine as Russian military forces continue to advance. MCC partner Charitable Foundation UMAN Help Center distributes food; MCC hygiene kits, including toothpaste; and comforters to hundreds of people each month. (Photo courtesy of UMAN)

MCC partner Charitable Foundation UMAN Help Center provides food and other essential basics for people fleeing to, or through, the city of Uman, Ukraine. (Photo courtesy of UMAN)