A lifetime of taking pictures

Saskatoon senior reflects on his love of photography 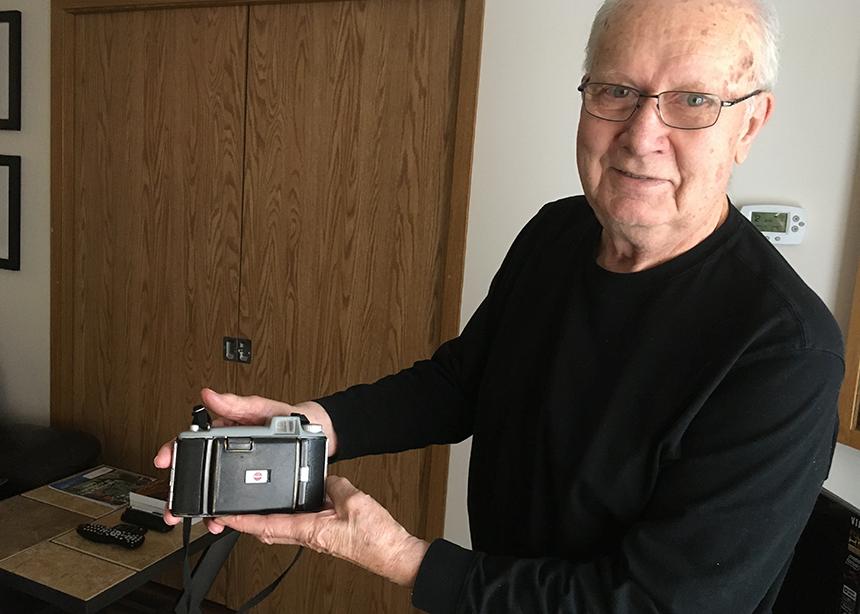 Henry Harms once owned a thousand cameras. He still has a closet full of them. They bear witness to a life-long love of photography.

Harms was 9 when he bought his first camera—a Baby Brownie Special. As a boy growing up on a farm near Hague, Sask., he would go to Saskatoon to watch ball games at Cairns Field. He purchased the camera at a store next to the ball diamond.

Harms’s love of photography was always closely linked with sports. In the early days, he took pictures of the Osler Monarchs’ ball games. But, he says, “I didn’t take a lot of pictures because it was expensive.”

Harms and his wife Joan had four children, all of whom were involved in sports. His youngest son, Randy, played softball. Harms always took his camera to his son’s games.

“When Randy’s team went to the midget softball finals in Halifax, I went along,” he says. “I rented a car and went to all the tourist sites and took pictures.”

Early in his career as a high school teacher, Harms worked for two years as dean of boys at Rosthern Junior College (RJC).

There he met a Grade 10 boy who didn’t quite fit in with the other students. The boy was interested in photography, so Harms taught him how to print pictures.

Years after retiring from teaching, Harms worked at a Saskatoon photography shop called The Darkroom. One day a man walked in with film to be developed. Harms describes him as “a hippie-type guy who drove a Volkswagen van.” He recognized his former student right away, although the man didn’t know him.

“He told me his stories, how he had done photos for National Geographic and had travelled to Africa and Europe,” says Harms. “I asked him, ‘What spurred you to do this?’”

“He said his parents sent him to RJC and a teacher there had given him a chance,” says Harms. He asked the man, “Would you recognize that teacher if you saw him?” That’s when the man recognized Harms as his former dean.

When Harms retired from teaching in 1993, he worked as a freelance photographer for a company that did student portraits. He also did family portraits but he didn’t enjoy either of those jobs.

So he went to a Saskatoon automobile dealership looking for work. They asked if he wanted to sell cars. He said no. What he wanted was to travel to small towns around Saskatchewan and find out what the dealership could do for people to help them remain in their communities.

Initially, the owners laughed at the idea. Two weeks later, they hired him.

For two years he travelled the province, asking people how the dealership could serve them better. Along the way, he took lots of pictures.

Harms took those rolls of film to The Darkroom to be developed.

“I would develop my own pictures and also helped with others’, ” says Harms. One day the owner said to him, “You’re working here all the time anyway. You might as well earn a pay cheque.” When Don’s Photo bought out The Darkroom, Harms kept working.

Through the years, he took pictures of family events and community life. “I come from a big family,” he says, “so there were lots of weddings.” Studio photographers were expensive, and Harms took pictures on location at affordable prices, so his relatives and friends hired him instead.

But one of his great loves remained photographing sports teams. Professional photographers would “sell the rights to three pictures for $99,” he says. “I took pictures and gave them to the coach. They could get pictures for free.”

Eventually, word of Harms’s skill and generosity reached the University of Saskatchewan, and he was asked to photograph the university’s teams. “When the UofS approached me to take pictures at sporting events,” he says, “Joan and I got staff cards. I took my camera along and we got in on all university events free.”

“I never did get rich taking pictures because I wanted people to have pictures rather than making money [for myself],” says Harms. Although he charged enough to cover his costs, he says he “thought of it as a service for family and friends.”

Harms, who is 82, enjoys restoring and retouching old photographs, helping to preserve history.

He still enjoys taking pictures, although he doesn’t take as many as he once did. “What do I do with them?” he wonders. 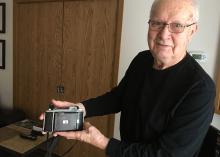 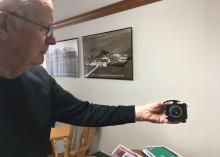 Henry Harms holds up the Baby Brownie Special he bought when he was nine years old. (Photo by Donna Schulz) 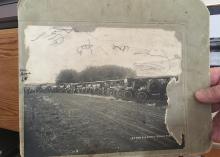 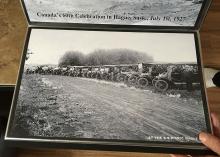 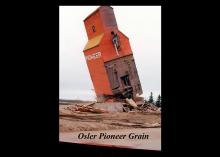 Henry Harms’s photo of the demolition of a grain elevator in Osler, Sask., was taken in 1999. (Photo by Harry Harms) 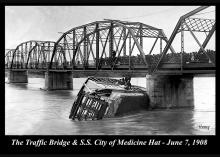 Henry Harms restored this historic photograph of the sinking of the S.S. City of Medicine Hat when it struck the traffic bridge in Saskatoon in 1908. (Photo by Harry Harms) 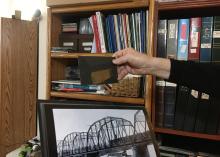 Henry Harms displays the original glass negative he used to restore the photo of the sinking of the S.S. City of Medicine Hat. (Photo by Donna Schulz) 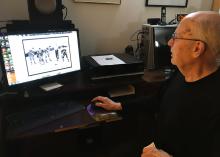 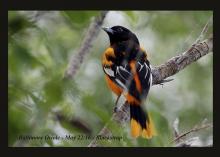 This picture of a Baltimore oriole shows Henry Harms’ skill as a nature photographer. (Photo by Harry Harms) 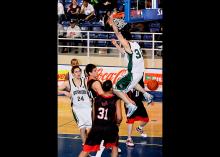