Lessons from the wheel 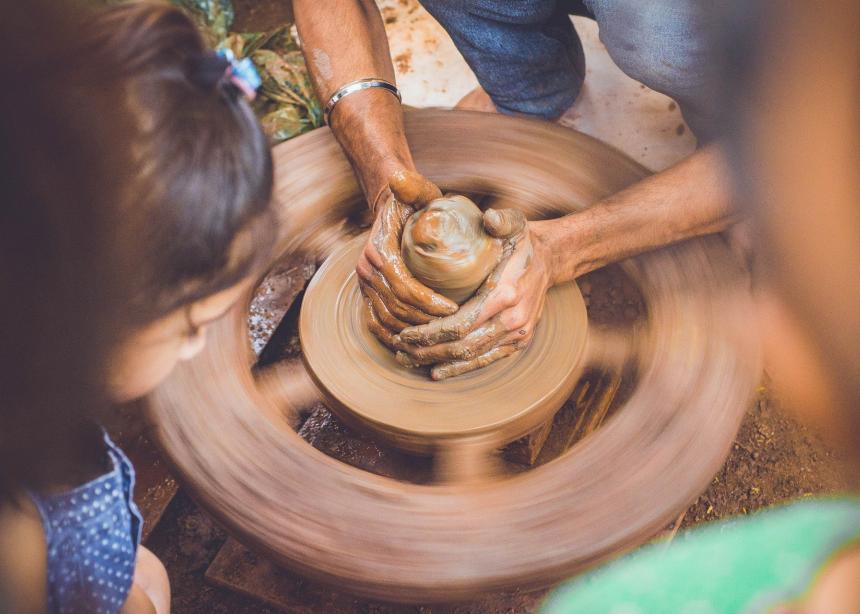 My best friend, Mike, is a potter. Our friendship has afforded me the occasional opportunity to sit at his wheel and try my hand at pottery. I’ve learned that it isn’t easy.

Mike is a good teacher, though, and during my first time at the wheel I was able to fashion a half-decent bowl. There were, however, a few times along the way that my creation wasn’t working. My piece would become misshapen, so I would destroy my project, clump up my clay and start afresh. Eventually, I produced something I was pleased with.

In Jeremiah 18, God sends Jeremiah to the potter’s house to watch the potter refashion a piece that had been marred, just as I had experienced with my piece. God uses this image to compare Israel to the clay in the hands of God, with the potter saying: “O house of Israel, can I not do with you as this potter does? Like clay in the hand of the potter, so are you in my hand.”

I wondered if this description eases the harsh language of destruction surrounding the passage. Perhaps God isn’t utterly destroying them beyond repair, but, instead, is taking a wayward people, a misshapen vessel, and is refashioning it to create a better one: Destruction for the purpose of re-creation.

The bowl I made at Mike’s studio was glazed and fired, and used by my family for about a year until one fateful morning my daughter dropped it onto the floor, breaking it to pieces. She was so upset and came to me sobbing, completely unable to tell me what had happened. The piece that I had made, that I had once formed and reformed when it wasn’t working properly, was now permanently destroyed. The potter cannot reshape the pot once it’s fired. I was sad to throw it out.

A few days after reading Jeremiah 18, I read Chapter 19: “Break the jar while those who go with you are watching, and say to them, ‘This is what the Lord Almighty says: “I will smash this nation and this city just as this potter’s jar is smashed and cannot be repaired.” ’ ”

So much for me wanting to ease the harshness of God’s destruction of Israel.

In Chapter 18, God offers Israel a chance to turn from its evil ways, but the people don’t allow the Potter to reshape them. Instead, they throw their marred misshapen selves into the kiln, where they are fired into irreparable disobedience, to eventually be smashed and broken.

If I can continue to be mouldable by the Potter, I can be reshaped when I’ve become marred in some way. If my beliefs, practices and ways of being are fired into permanence in the kiln, I’m no longer able to be reshaped by the Potter and I’m dangerously susceptible to breaking.

But what about when we are smashed and broken? I know—because of the rest of Scripture—that, even in this state of seeming irreparability, God offers redemption and restoration in ways unforeseen in Jeremiah’s time.

There’s something called kintsugi, the Japanese art of repairing broken pottery using gold to fuse the cracks. It is a fantastic image of making beauty from brokenness, making precious what was useless.

Could Jesus function as a kind of kintsugi in Scripture and in us? Jesus takes what is irreparable and makes it whole again, transforming the cracks into something beautiful and usable once again.

Although they were broken and shattered, God never discarded Israel. I wish I wouldn’t have thrown out my bowl.