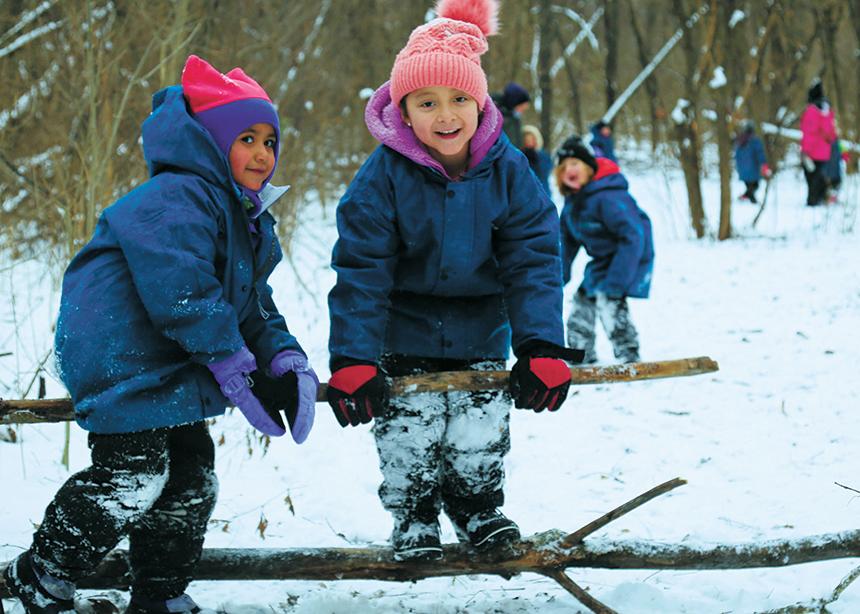 While it may sound like the children are given a whole day of recess, they are actually participating in Kinderforest, a program of Goshen College’s Merry Lea Environmental Learning Center, the first of its kind in Goshen.

Kinderforest is largely based on immersing children in nature, in the hope of forging a love for the environment, and developing in physical, social, emotional and cognitive aspects.

Several benefits come from Kinderforest programs, according to Marcos Stoltzfus, Merry Lea’s director of environmental outreach: Children learn to think critically, they discover a sense of place and they get a sense of accomplishment from doing things on their own.

For the College Kindergarten class, a normal day of Kinderforest begins at 8:30 a.m. Before the students go out to play, it’s important that they’re dressed properly. During the winter months, they need to be bundled up with snow pants and boots, waterproof gloves and hats. And no matter the season, the kids wear “Frogg Toggs,” waterproof jackets and pants to keep them dry and safe from poison ivy.

Then, Jenna Labash, the teacher of the College Kindergarten class, and Katie Stoltzfus, another environmental educator from Merry Lea, lead the children to Witmer Woods, right across the street from the campus. Once they arrive, the children go to their “sit spots,” specific places in the woods that each child has chosen. While at their spot for 15 minutes, they quietly journal observations about the environment around them.

After a quick regrouping to talk about what they saw at their “sit spots,” the students are released to go exploring. For the most part, they are free to do what they want: climb trees, swing sticks around, pick up fallen tree trunks. The children need to stay in view of an adult and are often reminded to think about safety.

According to Marcos, research shows that students who engage in “appropriate risk” are better able to evaluate how “ready” they are to take on the next task. “We’re intentionally trying to give them space to develop some resilience and practise skills that sometimes include falling down or scraping a knee.”

With an environmental educator along, the children have the opportunity to learn not only about taking risks and learning from mistakes, but also about plants and the environment. 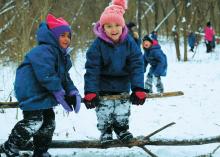 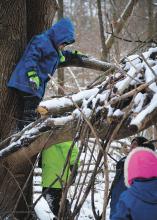 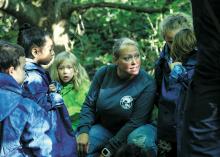