A lesson I want my kids to learn 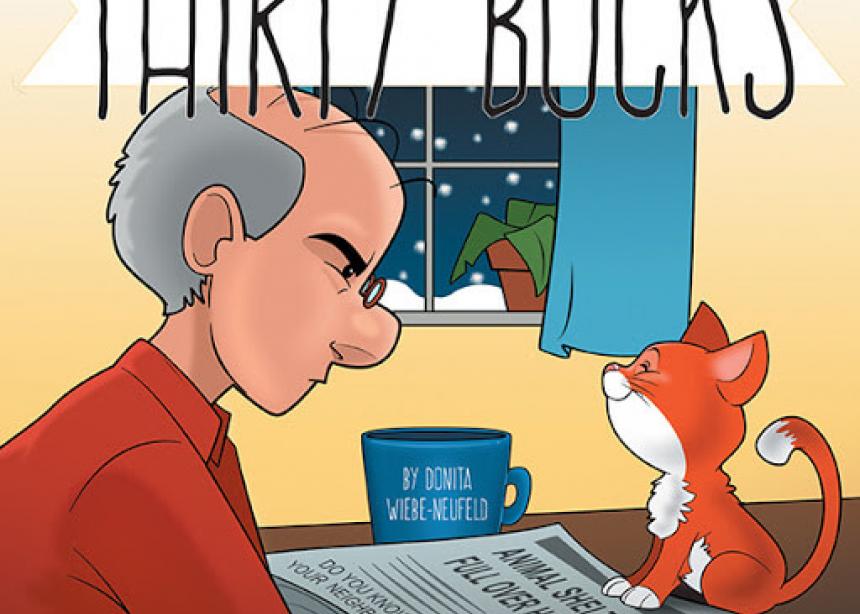 Then there are those books that appeal to both me and my kids, and which we will happily read together over and over again. Donita Wiebe-Neufeld’s book Thirty Bucks falls into this category. It is a charming story of a reclusive man, dubbed “Mr. Hermit” by the local kids, who is talked into caring for an abandoned kitten for a week in exchange for $30. It tells the tale of how this seemingly insignificant act changes not only the man, but the world around him.

The cat, named “Thirty Bucks” for the amount of money Mr. Hermit is offered, is an escape artist. By following Thirty Bucks’s footprints in the snow, Mr. Hermit begins to meet his neighbours, who welcome the lonely man with chocolate chip cookies and supper invitations, and who provide opportunities for him to serve them. At the end of the week, Mr. Hermit’s life has changed so much that he puts the $30 to a surprising use.

The illustrations by Chad Thompson are simple and engaging.

Although some pages are text heavy, the story is well told. My only criticism is that there are sometimes too many details that may go over the heads of younger readers. For instance, we learn that “every day a grey car left the garage at 5:30 a.m. and returned at 5:30 p.m. Every Saturday in summer, his lawnmower growled at 7 a.m., unless it rained.” I feel that these details, while interesting, don’t help move the story along.

Thirty Bucks is set at Christmastime and, although it is not a Christmas story per se, there are parallels to the unexpected birth of Jesus and how his entrance into the world provided the opportunity for people to change. In the same way that Mr. Hermit followed Thirty Bucks’s footprints in the snow, by following in Jesus’ footsteps we are invited to engage with our neighbours not only to be served, but also to serve.

By engaging with the world in this way, not only will we change other people’s lives but, as Mr. Hermit did, we will find our own lives changed as well. That is a lesson I want my kids to learn, and reading Thirty Bucks to them is a good way to teach it.

See more information about the book at the author's website. 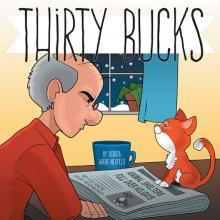